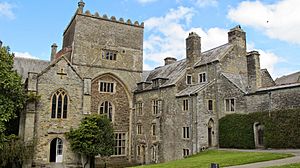 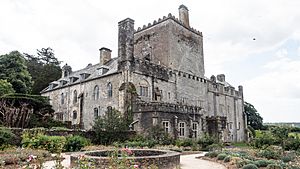 Buckland Abbey is a Grade I listed 700-year-old house in Buckland Monachorum, near Yelverton, Devon, England, noted for its connection with Sir Richard Grenville the Younger and Sir Francis Drake. It is owned by the National Trust.

Buckland Abbey was founded as a Cistercian abbey in 1278 by Amicia, Countess of Devon and was a daughter house of Quarr Abbey, on the Isle of Wight. It was one of the last Cistercian houses founded in England and also the most westerly. The remains of the church are about 37.6 metres (123 ft) long. The width across the transepts is 28 metres (92 ft). The nave and presbytery is 10.1 metres (33 ft) wide.

In the Bishop of Exeter episcopal registers show the abbey managed five granges at Buckland plus the home farm at the abbey. A market and fair at Buckland and Cullompton were granted in 1318. In 1337 King Edward III granted the monks a licence to crenellate. 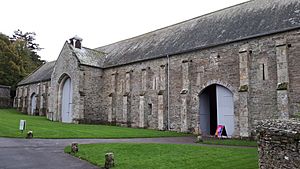 The Grade I listed Tithe Barn

In the 15th century the monks built a Tithe Barn which is 180 feet (55 m) long and survives to this day. It is Grade I listed

In 1541 Henry sold Buckland to Sir Richard Grenville the Elder (Sewer of the Chamber to Henry VIII, poet, soldier, last Earl Marshall of Calais) who, working with his son Sir Roger Greynvile (Gentleman of the Privy Chamber of Henry VIII, Captain of the ill-fated Mary Rose), began to convert the abbey into a residence, renaming it Buckland Greynvile. Sir Roger died in 1545 when the Mary Rose heeled over in a sudden squall while the English Fleet was engaged with the French Fleet in the Narrow Sea off Portsmouth. He left a son aged 3, also named Richard Grenville, who completed the conversion in 1575–76. After being owned by the family for 40 years, Buckland Greynvile was sold by Sir Richard the Younger to two intermediaries in 1581, who unknown to Grenyvile, were working for Drake, whom he despised. The abbey is unusual in that the church was retained as the principal component of the new house whilst most of the remainder was demolished, which was a reversal of the normal outcome with this type of redevelopment.

Drake lived in the house for 15 years, as did many of his collateral descendants including the Dowager Lady Seaton, Born Elisabeth Fuller-Elliot-Drake, who died on 9 May 1937. She left a life interest to Captain Richard Owen Tapps Gervis Meyrick. In 1946 he sold it to Captain Arthur Rodd, who presented the property to the National Trust in 1947. 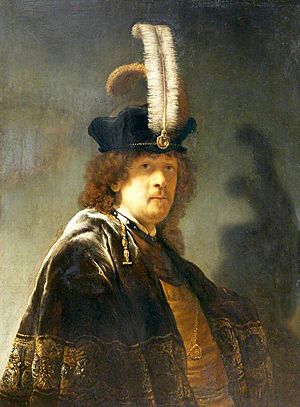 Following a restoration between 1948 and 1951 which cost around £20,000 (equivalent to £450,000 in 2018),2018 largely funded by the Pilgrim Trust the property has been open to the public since 1951 and is operated by the National Trust with the assistance of Plymouth City Council — the Plymouth City Museum and Art Gallery use the building to house part of their collection. The collection is noted for the presence of "Drake's Drum". A number of independent craft workshops are located in the converted ox sheds. The Cider House garden includes both a wild garden and a kitchen garden. There is also a medieval Great Barn next to the house.

In March 2013 the portrait of a man wearing a white feathered bonnet was re-attributed to Rembrandt by the Rembrandt expert Ernst van de Wetering. In June 2014, after eight months of work at the Hamilton Kerr Institute, the painting's authenticity was confirmed and its value estimated at £30m.

The National Trust Costume Group operate at Buckland Abbey, creating authentic Elizabethan costumes using traditional materials and methods. There is a complete Francis Drake costume, based on the famous portrait of Drake in the National Gallery, and the group are currently working on a costume for Lady Drake, also based on a portrait.

All content from Kiddle encyclopedia articles (including the article images and facts) can be freely used under Attribution-ShareAlike license, unless stated otherwise. Cite this article:
Buckland Abbey Facts for Kids. Kiddle Encyclopedia.