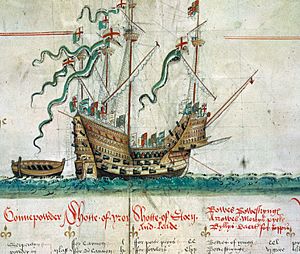 A picture of the Mary Rose in the Anthony Roll.

The Mary Rose was a ship which belonged to Henry VIII of England. She sank in 1545 in battle with a French fleet.

The remains of the Mary Rose are currently in Portsmouth, England with the HMS Victory and HMS Warrior.

It is not known the exact reason for the sinking. One of the theories is that she had the gun ports open to fire at the French. She then turned to fire at the other side, but the men on board failed to close the gun ports. Sea water got in the open gun ports, which tipped her over and she sank.

The Mary Rose sank because the wind blew and tipped her over.

All content from Kiddle encyclopedia articles (including the article images and facts) can be freely used under Attribution-ShareAlike license, unless stated otherwise. Cite this article:
Mary Rose Facts for Kids. Kiddle Encyclopedia.