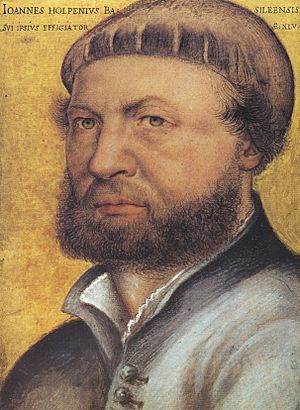 Self-portrait by Hans Holbein the Younger

He was a German artist born in Augsburg, and was but he traveled to England in 1526 in find work there. He was a great portrait painter. He also painted some religious paintings.

He was a very talented painter who had his own style of painting. He was made to the King's Painter in England. He worked for King Henry VIII.

He also worked in England for several famous people, Thomas More, Anne Boleyn and Thomas Cromwell, and painted many portraits of the English royal family and nobles. These paintings show us today the English court life in the time of Henry VIII of England.

He was loved and appreciated by his time. Holbein is one of the greatest artists in the art history.

His portrait of Erasmus and Thomas More are now very famous.

All content from Kiddle encyclopedia articles (including the article images and facts) can be freely used under Attribution-ShareAlike license, unless stated otherwise. Cite this article:
Hans Holbein the Younger Facts for Kids. Kiddle Encyclopedia.