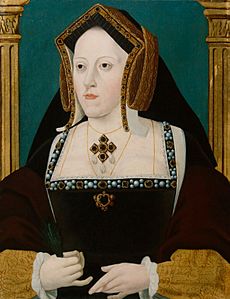 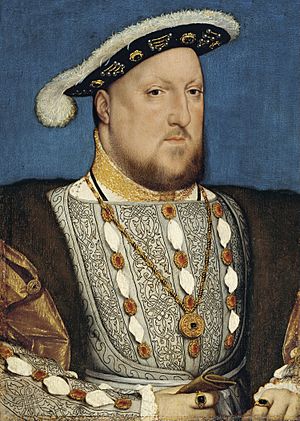 Henry VIII, by Hans Holbein the Younger, around 1537 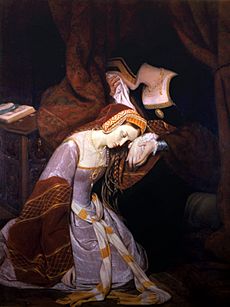 Anne Boleyn (1501 or 1507 – 19 May 1536) was the second wife of King Henry VIII of England and queen consort from 1533 until 1536. She was the mother of Elizabeth I of England. Anne has been called "the most influential and important queen consort England has ever had." It was because of Anne Boleyn that Henry VIII divorced Catherine of Aragon, and became independent from the Roman Catholic Church. After she was falsely accused of high treason she was executed.

There were many different opinions of Anne Boleyn's beauty. The most well-known description of Anne was written by the Catholic Nicholas Sanders in 1586. He wrote it several years after Anne died. Even though this is the most famous, it is also probably the least correct description. "Anne Boleyn," he said, "was rather tall ... with black hair, and an oval face of a sallow complexion, as if troubled with jaundice. She had a projecting tooth under the upper lip, and on her right hand six fingers (which historians now say is not true). There was a large wen under her chin, and therefore to hide its ugliness she wore a high dress covering her throat ... She was handsome to look at, with a pretty mouth."

Sanders said that it was because of Anne that Henry went away from the Catholic Church. Sanders' words about Anne made what Eric Ives called the "monster legend" of Anne Boleyn. Anne was also a good dancer. William Forrest, who wrote a modern poem about Catherine of Aragon, praised Anne's dancing. He said she had "excellent skill as a dancer."

She was born in either 1501 or 1507. The location was either Blickling Hall in Norfolk or Hever Castle in Kent. She was the daughter of Sir Thomas Boleyn, a courtier and later a diplomat, and his wife Lady Elizabeth Howard, daughter of the Duke of Norfolk. She had two siblings; a sister Mary and a brother George.

Anne's early education was the same for girls of her class. Her academic education was limited to arithmetic, her family genealogy, grammar, history, reading, and writing. She had been given a strong upbringing in religion and the Scriptures as the Boleyns were a family of firm religious beliefs. Anne developed domestic skills such as dancing, embroidery, good manners and morals, household management, music, needlework, and singing and excelled in playing several musical instruments including the block flute, the harp, the lute, and the virginals. She learned to play games such as, cards, chess, and dice and outdoor pursuits such as archery, falconry, horseback riding, and hunting. Anne was also taught to have obedience to the men in her life was which first to her father and then to her husband once she was married.

In 1513, she was sent to Margaret of Austria's royal court in the Netherlands to complete her education. Anne learned to speak French and studied art, culture, dance, literature, music, and poetry while she was there.

The following year, she was transferred to the French court on the occasion of the marriage of Princess Mary Tudor, younger sister of King Henry VIII, to the French King Louis XII.

Anne remained in France after the death of Louis XII and served as a lady-in-waiting to Queen Claude upon the accession of Francis I. In Queen Claude's household, Anne completed her study of French and developed a thorough knowledge of French culture and etiquette.

As well as English, French, and some Italian, Anne demonstrated a working knowledge of Latin. She also developed an interest in fashion and religious philosophy that called for reform of the Church. Anne stayed in France until late winter 1521.

Anne was called back to England to marry a distant cousin James Butler, in the hope to settle an inheritance dispute over the Earldom of Ormond. However, when the plan failed, Thomas Boleyn found a place for his daughter at the English court, as lady-in-waiting to Queen Katherine. There, Anne fell in love with Sir Henry Percy, who was the eldest son of the Earl of Northumberland, and they became secretly engaged to be married much to the displeasure of their respective families. Cardinal Wolsey ordered them to be separated. Anne was sent home to Hever Castle and Henry Percy was forced to marry Lady Mary Talbot, the daughter of Edward Talbot, Earl of Shrewsbury. Anne blamed Cardinal Wolsey for her lost love and was determined to have her revenge on him, because he had called her a "foolish girl".

Anne came back to the royal court and soon King Henry fell passionately in love with her.

King Henry's marriage to Catherine of Aragon had produced only one daughter, Princess Mary. Henry needed a son to to be king after him and to secure the Tudor dynasty, but Catherine was now too old to have children. Henry then came to see Anne as the answer to the problem of the succession, and decided to divorce Catherine, so that he could marry Anne instead and have male heirs.

A special court was held to decide if the divorce should be allowed but nobody could decide what to do.

After becoming Marquess of Pembroke in her own right, Anne became pregnant. In order to have a legitimate heir to the throne, this meant that Anne and Henry needed to get married quickly and were secretly married on January 25, 1533, even though the divorce from Catherine had not come through.

Henry's marriage to Catherine of Aragon was declared illegal in the following May by the newly appointed Archbishop of Canterbury Thomas Cranmer, former chaplain of the Boleyns. Catherine was sent away from court with the title of Dowager Princess of Wales as if she had never been married to Henry.

Now recognized as Henry's legal wife, Anne was formally crowned Queen of England on June 1, 1533. All that was needed now was the birth of a son and her triumph would be complete.

Anne gave birth to a daughter, the future Elizabeth I of England, on September 7, 1533. King Henry was very disappointed that she couldn't give him a son. The situation only deteriorated when the king began to pay special attention to a lady of the court named Jane Seymour.

When, on January 29, 1536, Anne gave birth to a stillborn male child, Henry felt betrayed and completely turned against her, accusing her of having bewitched him.

Henry's new secretary, Thomas Cromwell, looked for a way to get rid of Anne so that Henry could get married again to Jane Seymour. He found people who said that Anne had been having affairs with other men while she was married to King Henry. She was put on trial and found guilty of treason, although she was probably innocent.

All content from Kiddle encyclopedia articles (including the article images and facts) can be freely used under Attribution-ShareAlike license, unless stated otherwise. Cite this article:
Anne Boleyn Facts for Kids. Kiddle Encyclopedia.