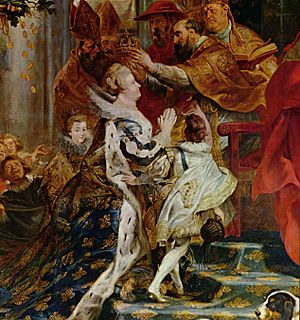 Coronation of a Queen of France

A coronation is a ceremony marking the formal investiture of a monarch with regal power, usually involving the ritual placement of a crown upon the monarch's head and the presentation of other items of regalia. The ceremony can also be conducted for the monarch's consort, either simultaneously with the monarch or as a separate event.

A ceremony without the placement of a crown on the person's head is known as an enthronement. The ceremony may include the taking of special vows by the monarch, acts of homage by the new ruler's subjects and the performance of other ritual deeds of special significance to the particular nation. Once a vital ritual among the world's monarchies, coronations have changed over time for a variety of socio-political and religious factors; most modern monarchies have dispensed with them altogether, preferring simpler ceremonies. 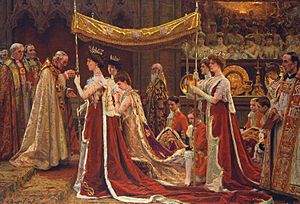 The Anointing of Queen Alexandra at the Coronation of Edward VII

Coronations are still observed in the United Kingdom, Tonga, and several Asian and African countries. Coronation in common parlance today may also, in a broader sense, refer to any formal ceremony in relation to the accession of a monarch such as an official investiture or enthronement, whether or not an actual crown is bestowed.

In addition to investing the monarch with symbols of state, Western-style coronations have often traditionally involve anointing with holy oil, or chrism as it is often called. Wherever a ruler is anointed in this way, as in Great Britain and Tonga, this ritual takes on an overtly religious significance, following examples found in the Bible.

Some other lands use bathing or cleansing rites, the drinking of a sacred beverage, or other religious practices to achieve a comparable effect. Such acts symbolise the granting of divine favour to the monarch within the relevant spiritual-religious paradigm of the country. 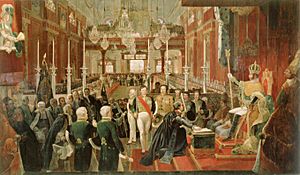 Coronation ceremony of Emperor Pedro I of Brazil in 1822

In the past, concepts of royalty, coronation and deity were often inexorably linked. In some ancient cultures, rulers were considered to be divine or partially divine: the Egyptian Pharaoh was believed to be the son of Ra, the sun god, while in Japan, the Emperor was believed to be a descendant of Amaterasu, the sun goddess. Rome promulgated the practice of emperor worship; in Medieval Europe, monarchs claimed to have a divine right.

Coronations were once a direct visual expression of these alleged connections, but recent centuries have seen the lessening of such beliefs. Thus, coronations (or their religious elements, at least) have often been discarded altogether or altered to reflect the constitutional nature of the states in which they are held. However, some monarchies still choose to retain an overtly religious dimension to their accession rituals. Others have adopted simpler enthronement or inauguration ceremonies, or even no ceremony at all.

All content from Kiddle encyclopedia articles (including the article images and facts) can be freely used under Attribution-ShareAlike license, unless stated otherwise. Cite this article:
Coronation Facts for Kids. Kiddle Encyclopedia.