Pope Celestine V(Latin: Coelestinus Quintus; 1215 – 19 May 1296), born Pietro Angelerio di Morrone, was an Italian cleric of the Roman Catholic Church and the 193rd Pope for less than six months in 1294.

Celestine V is a saint of the Catholic Church.

Pietro Angelerio was born in the Neopolitan province of Moline.

In 1232, Angelerio became a Benedictine monk at age 17; and he was later ordained a priest. 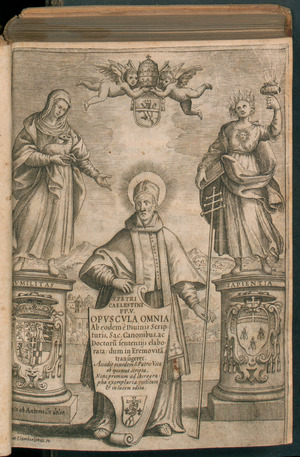 In July 1294, the monk was elected pope; and in the same year, he abdicated or resigned from his office.

Pope Boniface VIII confined the former pope in the castle of Fumone, and he died there.

In 1313, Celestine was made a saint by Pope Clement V.

Coat of arms of Celestine V

All content from Kiddle encyclopedia articles (including the article images and facts) can be freely used under Attribution-ShareAlike license, unless stated otherwise. Cite this article:
Pope Celestine V Facts for Kids. Kiddle Encyclopedia.