John the Baptist facts for kids

John the Baptist (also called John the Baptizer or Yahya the Baptizer) is viewed as a prophet by at least three religions: Christianity, Islam, and Mandaeanism. According to the New Testament, he was a preacher who baptized people.

John called people to turn to God and to prepare for the coming of the messiah (Jesus). He baptized Jesus in the Jordan River. People would go to him so that he would put them in the water to show that they have turned away from their sins, so that they could get into heaven.

John was the son of Zechariah and Elizabeth, and a relative of Jesus. He was known for living in the wild, wearing clothes made from camel's hair, and eating locusts and honey. In Catholicism, his birthday is celebrated on June 24.

According to the New Testament, John anticipated a messianic figure greater than himself. Christians commonly refer to John as the precursor or forerunner of Jesus, since John announces Jesus' coming. John is also identified as the spiritual successor of the prophet Elijah. 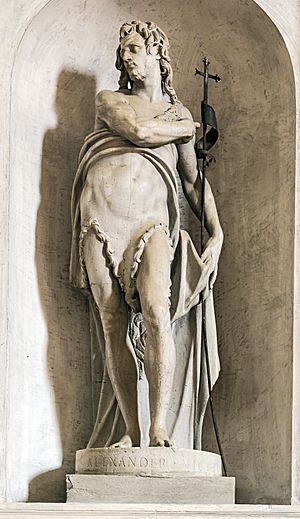 Saint John the Baptist is the patron saint of Jordan: his beheading is said to have taken place in Machaerus in central Jordan.

Saint John the Baptist is the patron saint of the Commonwealth of Puerto Rico and its capital city, San Juan.

He is also a patron saint of French Canada, and Newfoundland. The Canadian cities of St. John's, Newfoundland (1497) and Saint John, New Brunswick (1604) were both named in his honor. In the United Kingdom, Saint John is the patron of Penzance, Cornwall. His feast day of June 24, celebrated officially in Quebec as the Fête Nationale du Québec, and in Newfoundland as Discovery Day.

In Scotland, he is the patron saint of Perth, which used to be known as St. John's Toun of Perth. The main church in the city is still the medieval Kirk of St. John the Baptist and the city's professional football club is called St Johnstone F.C.

Also, on the night of June 23 on to the 24th, Saint John is celebrated as the patron saint of Porto, the second largest city in Portugal. An article from June 2004 in The Guardian remarked that "Porto's Festa de São João is one of Europe's liveliest street festivals, yet it is relatively unknown outside the country".

He is also patron of the Knights Hospitaller of Jerusalem, Malta, Florence, and Genoa, Italy. John is patron saint of Xewkija, Gozo, Malta, which remember him with a great feast on the Sunday nearest to June 24.

Calamba City, Laguna, Calumpit, Bulacan, Balayan and Lian in Batangas, and San Juan, Metro Manila are among several places in the Philippines that venerate John as the town or city patron. A common practise of many Filipino fiestas in his honour is bathing and the wetting of people in memory of John's iconic act. The custom is similar in form to Songkran and Holi, and serves as a playful rest from the intense tropical heat. While famed for the Black Nazarene it enshrines, Quiapo Church in Manila is actually dedicated to Saint John. 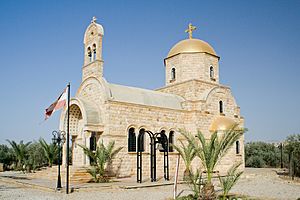 John the Baptist Church was erected by the Orthodox Church in honor of John the Baptist. The interior of the church contains many beautiful murals depicting the life events of Christ. The church is located just meters from the Jordan River

He is also patron of the Roman Catholic Diocese of Charleston, which covers the whole of South Carolina in the United States.

The Baptistines are the name given to a number of religious orders dedicated to the memory of John the Baptist.

Along with John the Evangelist, John the Baptist is claimed as a patron saint by the fraternal society of Free and Accepted Masons (better known as the Freemasons).

In many Mediterranean countries, the summer solstice is dedicated to St. John. The associated ritual is very similar to Midsummer celebrations in the Anglo-Saxon tradition.

All content from Kiddle encyclopedia articles (including the article images and facts) can be freely used under Attribution-ShareAlike license, unless stated otherwise. Cite this article:
John the Baptist Facts for Kids. Kiddle Encyclopedia.