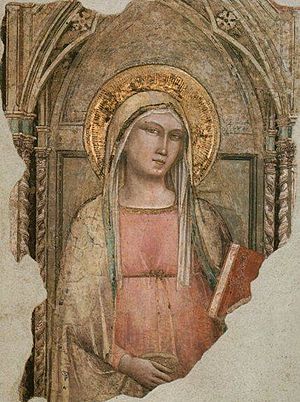 The Virgin Mary, mother of Jesus, by Taddeo Gaddi in the 14th century

Mary in the Bible

Mary asked the angel how she could be pregnant, since she was a virgin. The angel told her that God had made her pregnant through a miracle.

In the sixth month, the angel Gabriel was sent from God to a town of Galilee called Nazareth, to a virgin betrothed to a man named Joseph, of the house of David, and the virgin’s name was Mary. And coming to her, he said, “Hail, favored one! The Lord is with you.” But she was greatly troubled at what was said and pondered what sort of greeting this might be. Then the angel said to her, “Do not be afraid, Mary, for you have found favor with God. Behold, you will conceive in your womb and bear a son, and you shall name him Jesus. He will be great and will be called Son of the Most High, and the Lord God will give him the throne of David his father, and he will rule over the house of Jacob forever, and of his kingdom there will be no end.” But Mary said to the angel, “How can this be, since I have no relations with a man?” And the angel said to her in reply, “The holy Spirit will come upon you, and the power of the Most High will overshadow you. Therefore the child to be born will be called holy, the Son of God. And behold, Elizabeth, your relative, has also conceived a son in her old age, and this is the sixth month for her who was called barren; for nothing will be impossible for God.” Mary said, “Behold, I am the handmaid of the Lord. May it be done to me according to your word.” Then the angel departed from her.

According to the law that Israelites follow, Joseph had the right to divorce Mary publicly, but he did not. In a dream Joseph was told that Mary conceived by the Holy Spirit.

At this time, the Roman Emperor, Caesar Augustus, made a law that everyone in the Roman Empire had to pay a tax. Everyone had to go back to the town that their family came from, to have their name put on the tax lists. Joseph came from Bethlehem, which was called The City of David. So Joseph took Mary to Bethlehem. There, she gave birth to the baby, Jesus. She gave birth in an animal shed, because Mary and Joseph could not find a room to stay in.

Thirty-three years later, Jesus was killed by crucifixion. Many of Jesus' apostles were scared of the Roman soldiers and ran away. However, Mary stood by the cross and was with Jesus when he died. As he was dying, he told the young disciple John to care for Mary as if she was his own mother and the words were "Women,this is your son."This is your mother". On the third day after Jesus' death, Mary went to Jesus' tomb with other women. They saw that the stone was rolled away from the tomb, and his body was gone. An angel told the women that Jesus had risen and is alive.

Mary continued to meet with the early church after the Ascension. (Acts 1:14)

Mary is given honor in the Christian faith. She is especially honored as "the Mother of God" in the Roman Catholic Church She is also honored as "Theotokos" (roughly translated as "the one who gave birth to God") in the Eastern Orthodox Church. In Christianity, Jesus is thought to be both fully God and fully man.

Christians do not worship Mary, because they believe that only God should be worshipped. However, some Christians - mainly Roman Catholics and Orthodox Christians- venerate her, which means they pray to her and respect her acceptance of God's will by willingly giving birth to Jesus.

Mary is also given honor by Muslim(s) because the Qur'an says that she was a virgin when she gave birth to Jesus. Muslims honor Jesus as a great prophet.

Mary is often called "the Blessed Virgin Mary" by Roman Catholics. There are many feast days which honor the Virgin Mary. For example, the Nativity of the Blessed Virgin on 8 September remembers her birth. Catholics also celebrate the Immaculate conception, and Mary as Queen of Heaven on August 22.

Christian art often shows the Virgin Mary. Many paintings show Mary with the baby Jesus. These paintings are known as Madonna and Child pictures.

Many people who pray to Mary use a prayer called the Hail Mary. The first part of the prayer honors Mary: "Hail Mary, full of grace, the Lord is with thee. Blessed art thou amongst women, and blessed is the fruit of thy womb, Jesus." The second part of the prayer asks for Mary's help: "Holy Mary, Mother of God, pray for us sinners, now and in the hour of our deaths. Amen."

All content from Kiddle encyclopedia articles (including the article images and facts) can be freely used under Attribution-ShareAlike license, unless stated otherwise. Cite this article:
Mary (mother of Jesus) Facts for Kids. Kiddle Encyclopedia.