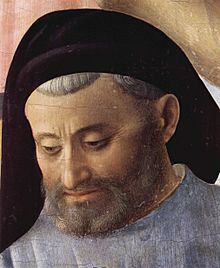 This face in the "Deposition of Christ" is thought to be a self portrait of Fra Angelico.

Fra Angelico (c. 1395– February 18, 1455), was an Italian Early Renaissance painter. Giorgio Vasari, who wrote the Lives of the Artists said he had "a rare and perfect talent".

Fra Angelico has been known by many different names. When he was born, he was called Guido di Pietro. People who knew him when he was older called him Fra Giovanni da Fiesole (Brother John from Fiesole). When Giorgio Vasari wrote about him in Lives of the Artists, in the 1500s, he was already known as Fra Giovanni Angelico (Brother Giovanni who is like an Angel).

The Italians usually call him il Beato Angelico (the Blessed Angelico). He has been called this for a long time, because he was thought to be blessed by God who gave him the talent of painting, and also because he was such a good and holy man. The name "Blessed Angelico" has now been made official, because in 1982 Pope John Paul II "conferred beatification" which means that he is now on the way to being made a saint.

Vasari says about him: "It is impossible to think of enough good things to say about this holy father, who was so humble and modest in everything that he did and said, and whose pictures were painted with such cleverness and holy faith." 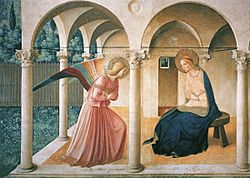 The "Annunciation" at San Mark's Convent

Fra Angelico was born in Mugello near Fiesole in Tuscany, Italy probably about 1385–87 and died in Rome in 1455. Nothing is known about his parents. He was baptized Guido or Guidolino.

In 1407, he joined the Dominican Order at Fiesole. In 1423, when he became officially a friar, he changed his name from Guido to Fra Giovanni (Brother John). (People who are accepted into a holy order, usually take a new name.) Like the other "brothers" (friars) of the Dominican Order, he wore a white robe and a black cloak, and shaved part of his head.

Fra Angelico had a brother called Benedetto who was also a Dominican friar. Fra Benedetto painted illuminated manuscripts. Fra Angelico possibly learnt to paint manuscripts as well. The convent of San Marco in Florence has several manuscript books that he is thought to have painted. He was very busy with other work at the convents where he lived, but he still found time to paint pictures, which very soon became famous. In January and February of 1418, he was paid for paintings that he did in the church of Santo Stefano del Ponte.

Between 1418 and 1436, Fra Angelico painted an altarpiece for the church in Fiesole, which has been damaged. Age caused the some of the paint to come off, or fade, and other artists have painted over some of Fra Angelico's work while trying to repair the paintings. The top part of the altarpiece is in the National Gallery, London. It shows Christ in Glory, surrounded by more than 250 figures, and is a large and magnificent piece of work. It has been described as one of the best works in the gallery. 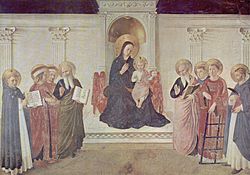 The Madonna and Child in Majesty with Saints in a fresco at San Marco, Florence. Two of the saints are Dominican friars like Fra Angelico.

In 1436, a new Dominican Convent of San Marco was established in Florence in some older monastery buildings. Fra Angelico was one of the friars from Fiesole who moved to Florence. This was an important move for Fra Angelico because Florence already had a great number of artists from whom he could learn. The convent had a very wealthy "patron of the arts" called Cosimo de' Medici who loved to buy works of art for himself and his favourite churches. Cosimo took the largest of the friars' rooms, called cells, at the convent so that he could have a quiet place for religious thought. Fra Angelico painted a picture showing the Magi at Bethlehem on the wall of Cosimo's cell.

Cosimo employed Fra Angelico to paint more pictures for the convent. All the cells for the friars were built upstairs around the sides of a square courtyard with a garden in the middle (called a cloister). On the wall at the top of the stairs, Fra Angelico painted a fresco of the Angel Gabriel announcing the birth of Jesus to the Blessed Virgin Mary. This is one of his most famous pictures. Fra Angelico then began to paint a picture in each of the monk's cells. Each cell has large picture with a round top on the wall beside the window. At least six of these paintings were done be by Fra Angelico, and others were done by artists who copied his style of painting. These pictures were to help the friars with their prayers.

In 1439, he finished one of his most famous works, which is the altarpiece for San Marco's Church, which is where the friars worship. It shows the Madonna and Child on a throne, surrounded by saints from different dates, who are all grouped together as if they were standing in a room in Heaven, talking about holy things. This type of painting called a "Sacred Conversation" later became very popular, but this is one of the first ones. 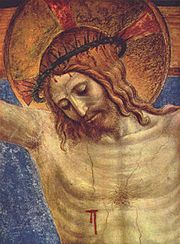 In 1445, Pope Eugenius IV sent a message for Fra Angelico to come to Rome to paint the frescoes of the Chapel of the Holy Sacrament at St Peter's. The chapel was later demolished by Pope Paul III to make way for the new St.Peter's Basilica and Fra Angelico's work was lost. Vasari says that one of the popes (it might have been Eugenius or Pope Nichoas V) asked Fra Angelico if he would like the very important job of Archbishop of Florence. But Fra Angelico did not want such a high job and he suggested the name of another friar for the position. In 1447 Fra Angelico went to the city of Orvieto with his pupil, Benozzo Gozzoli, to paint some pictures for the Cathedral there . One of his other pupils was called Zanobi Strozzi, but he did not become as famous as Benozzo.

From 1447 to 1449, Fra Angelico was back at the Vatican, where Pope Nicholas V had built a small chapel where he could pray privately. The pictures that Fra Angelico and his pupils painted there are the lives of two young saints St. Stephen and St. Lawrence, who were both "martyrs" (they were killed because of their Christian faith). The small chapel, with its bright colours and gold leaf decorations is like a jewel box. From 1449 until 1452, Fra Angelico was back at his old convent of Fiesole, where he was the Prior (the head man). Fra Angelico's pupils were probably left in Rome to finish the work on the chapel.

In 1455, Fra Angelico went back to Rome, probably to look at the work in Pope Nicholas' Chapel. He died at the Dominican Convent and was buried in the church of Santa Maria sopra Minerva. Pope John Paul II beatified Fra Angelico on October 3, 1982, making him officially known as the "Blessed Angelico". In 1984 the pope made him the patron of Catholic artists.

Fra Angelico never wanted to be important, and even though he was so talented he never put himself above other people. He thought his most important job was caring for others. He always prayed before he picked up his brushes to paint, and he never made any changes to his pictures later, because he believed that the Holy Spirit was guiding him. He painted a great number of scenes of the Crucifixion and he would always cry while he was painting them.

The words on his grave say:

"When you praise me, don't say that I am a famous painter.
Instead, say that for love of Jesus, I gave everything that I had to the poor.
The things that seem to be important on Earth are not the things that are important in Heaven.
I am Brother John, from Florence, the flower of Tuscany.

San Marco, Florence,The Day of Judgement. This panel is the top part of an altarpiece. It has expensive colours and gold, which show it was paid for by a rich patron.

Fra Angelico was working at a time when the style of painting was in a state of change. The changes had begun a hundred years before his time with the works of Giotto. Fra Angelico would have seen the famous pictures of the "Life of Saint Francis" that Giotto did for the church of Santa Croce in Florence. In Giotto's paintings the figures look more real and solid and lifelike than in the pictures of other painters of the 1300s. Giotto was also very good at painting the emotions on peoples faces and the actions that showed how they were feeling. His work was a big influence on every artist who saw it.

At the same time, rich patrons like Cosimo de Medici liked to show off their wealth. They often did this by ordering paintings that had lots of bright colour and real gold backgrounds. The red colour called "vermilion" was one of the most expensive. But the most expensive colour was a beautiful blue made by grinding up a semi-precious stone called Lapis lazuli. This type of painting is called "International Gothic". Some artists of Fra Angelico's day were expert at doing paintings that would make very rich people happy. But other painters, like Masaccio were followers of Giotto and painted in a very plain way.

Fra Angelico was able to paint in both ways. If the Pope or a rich family wanted an altarpiece or a fresco that had gold and expensive bright colours, then Fra Angelico could do it. But his most famous paintings have no gold and no bright colours. They are the simple gentle paintings of the life of Jesus that he did for the friars in their cells at San Marcos.

This gallery shows stories from the life of Jesus. The square paintings are in tempera. They are all parts of a big altarpiece and are about 25 cm wide. The "tondo" (round painting) is a small altarpiece about 1.4 metres wide. All the paintings with arched tops are frescos and were painted for the Dominican brothers.

All content from Kiddle encyclopedia articles (including the article images and facts) can be freely used under Attribution-ShareAlike license, unless stated otherwise. Cite this article:
Fra Angelico Facts for Kids. Kiddle Encyclopedia.