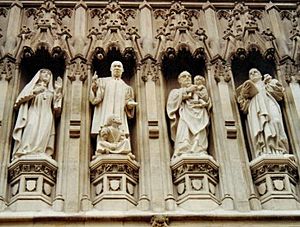 A martyr is a person who died or was killed because of their faith, for example Saint Stephen. One meaning of the word is "someone who dies for a particular cause", being used for people who die for any belief or idea.for example Bhagat Singh.

All content from Kiddle encyclopedia articles (including the article images and facts) can be freely used under Attribution-ShareAlike license, unless stated otherwise. Cite this article:
Martyr Facts for Kids. Kiddle Encyclopedia.