Husayn ibn Ali is known as a great figure in Islam. He refused to submit to Yazid I, the Umayyad caliph. For this he was killed at the Battle of Karbala, along with most of his family. He is regarded as a martyr by Muslims. 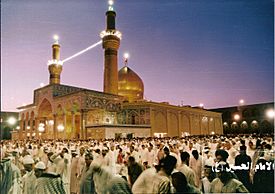 All content from Kiddle encyclopedia articles (including the article images and facts) can be freely used under Attribution-ShareAlike license, unless stated otherwise. Cite this article:
Husayn ibn Ali Facts for Kids. Kiddle Encyclopedia.