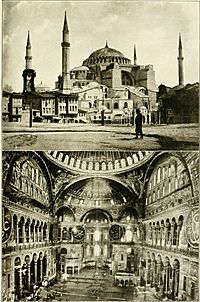 Hagia Sophia is a prestigious building in the European side of Istanbul, Turkey. It is often said to be one of the greatest and most beautiful buildings in history.

Hagia Sophia was built between 532 and 537, to serve as a Byzantine imperial church. After an earthquake, Trdat the Architect finished rebuilding it again in 994. It was used as an Eastern Orthodox church until 1453, except used as a Roman Catholic cathedral between 1204 and 1261. Ottoman sultan Mehmed the Conqueror converted it into a mosque in 1453 after the Fall of Constantinople. It became a museum in 1935 after the decision of the secularist Turkish government under Kemal Atatürk in 1934. In July 2020, the Islamist Turkish government under Tayyip Erdoğan ordered the Hagia Sophia to be turned back into a mosque following a supreme court annulment of a 1934 presidential decree that made it a museum.

All content from Kiddle encyclopedia articles (including the article images and facts) can be freely used under Attribution-ShareAlike license, unless stated otherwise. Cite this article:
Hagia Sophia Facts for Kids. Kiddle Encyclopedia.