This article details the history of Constantinople before the Turkish Conquest of 1453. For details on the city since 1453, see İstanbul.

Constantine's foundation of New Rome on this site reflected its strategic and commercial importance from the earliest times, lying as it does astride both the land route from Europe to Asia and the seaway from the Black or Euxine Sea to the Mediterranean, whilst also being possessed of an excellent and spacious harbour in the Golden Horn. No doubt for these reasons, a city was first founded on the site in the early days of Greek colonial expansion, when in 667 BC the legendary Byzas established it with a group of citizens from the town of Megara. This city was named Byzantium (Greek: Βυζάντιον), after its founder. 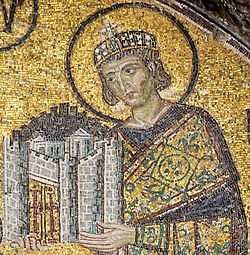 Emperor Constantine I of the Roman Empire with a model of the city (Hagia Sophia, ca. 1000)

Constantine laid out the expanded city, dividing it into 14 regions, and ornamenting it with great public works worthy of a great imperial city. The emperor stimulated private building by promising householders gifts of land from the imperial estates in Asiana and Pontica, and on 18 May 332 he announced that, as in Rome, free distributions of food would be made to citizens. At the time the amount is said to have been 80,000 rations a day, doled out from 117 distribution points around the city. 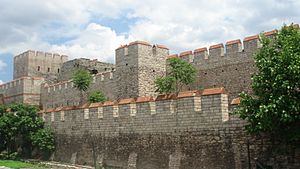 Constantinople was a Christian city, lying in the most Christianised part of the Empire.

Constantine laid out anew the square at the centre of old Byzantium, naming it the Augusteum in honour of his mother, Helena.

Sancta Sophia lay on the north side of the Augusteum. The new senate-house (or Curia) was housed in a basilica on the east side. On the south side of the great square was erected the Great Palace of the emperor with its imposing entrance, the Chalke, and its ceremonial suite known as the Palace of Daphne. Located immediately nearby was the vast Hippodrome for chariot-races, seating over 80,000 spectators, and the Baths of Zeuxippus (both originally built in the time of Severus). At the entrance at the western end of the Augusteum was the Milestone, a vaulted monument from which distances were measured across the Eastern Empire.

From the Augusteum a great street, the Mese, led, lined with colonnades. As it descended the First Hill of the city and climbed the Second Hill, it passed on the left the Praetorium or law-court. Then it passed through the oval Forum of Constantine where there was a second senate-house, then on and through the Forum of Taurus and then the Forum of Bous, and finally up the Sixth Hill and through to the Golden Gate on the Propontis. The Mese would be seven Roman miles long to the Golden Gate of the Walls of Theodosius.

Constantine erected a high column in the centre of the Forum, on the Second Hill, with a statue of himself at the top, crowned with a halo of seven rays and looking towards the rising sun.

Constantinople in the Divided Empire 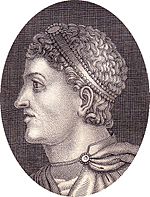 Emperor Theodosius I with a halo, on a contemporary silver plate (Royal Academy of History, Madrid)

Following the shock of the Battle of Adrianople in 376, when the emperor Valens with the flower of the Roman armies was destroyed by the Goths within a few days' march of the city, Constantinople looked to its defences, and Theodosius II built in 413-414 the 60-foot tall walls which were never to be breached until the coming of gunpowder. Theodosius also founded a University at the Capitolium near the Forum of Taurus, on 27 February 425.

In the 5th century, when the barbarians overran the Western Empire, its emperors retreated to Ravenna before it collapsed altogether. Thereafter, Constantinople became in truth the greatest city of the Empire, and the greatest in the world. Emperors were no longer peripatetic between various court capitals and palaces. They remained in their palace in Constantinople, and sent generals to command their armies. The wealth of the Eastern Mediterranean and Western Asia flowed into Constantinople.

The City under Justinian

The emperor Justinian (527-565) was known for his successes in war, for his legal reforms and for his public works. It was from Constantinople that his expedition for the reconquest of Africa set sail on or about 21 June 533.

Chariot-racing had been important in Rome for centuries. In Constantinople, the hippodrome became over time increasingly a place of political significance. 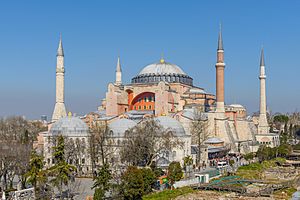 The current Hagia Sophia was commissioned by Emperor Justinian I after the previous one was destroyed in the Nika riots of 532. It was converted into a mosque in 1453 when the Ottoman Empire commenced and became a museum in 1935

Fires started by the rioters consumed the basilica of St Sophia, the city's principal church. Justinian commissioned Anthemius of Tralles and Isidore of Miletus to replace it with the incomparable St Sophia, the great cathedral of the Orthodox Church, whose dome was said to be held aloft by God alone, and which was directly connected to the palace so that the imperial family could attend services without passing through the streets (St Sophia was converted into a mosque after the Ottoman conquest of the city, and is now a museum).

The City after Justinian

Justinian was succeeded in turn by Justin II, Tiberius II and Maurice, able emperors who had to deal with a deteriorating military situation, especially on the eastern frontier. Subsequently there was a period of near-anarchy, which was exploited by the enemies of the Empire. After the Avars came to threaten Constantinople from the west and simultaneously the Persians from the East, Heraclius, the exarch of Africa, set sail for the city and assumed the purple. He found the situation so dire that at first he contemplated moving the imperial capital to Carthage, but with military genius he succeeded in expelling the invaders. No sooner had he carried war into their own territories, however, and achieved an advantageous peace with Persia, than he was faced with the Arab expansion. Constantinople was besieged twice by the Arabs, once in a long blockade between 674 and 678, and once again in 717.

In the eighth and ninth centuries the iconoclast movement caused serious political unrest throughout the Empire. The emperor Leo III issued a decree in 726 against images, and ordered the destruction of a statue of Christ over one of the doors of the Chalke, an act which was fiercely resisted by the citizens. Constantine V convoked a church council in 754 which condemned the worship of images, after which many treasures were broken, burned, or painted over. Following the death of his son Leo IV in 780, the empress Irene restored the veneration of images through the agency of the Second Council of Nicaea in 787. 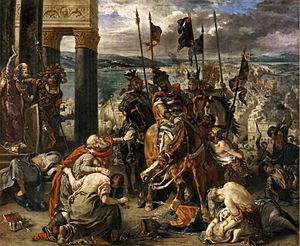 The Entry of the Crusaders into Constantinople, by Eugène Delacroix, 1840

Following the catastrophic defeat in 1071 of the emperor Romanus IV Diogenes by the Seljuk Turks at Manzikert in Armenia, his successor Michael VII pleaded for assistance from the West. In due course this was to lead to the First Crusade, which assembled at Constantinople in 1096 in the reign of Alexius I Comnenus, and moved on towards Jerusalem.

During this time, the Byzantine emperors made their capital at nearby Nicaea, which acted as the capital of the temporary, short-lived Empire of Nicaea and a refuge for refugees from the sacked city of Constantinople. From this base, Constantinople was eventually recaptured from its last Latin ruler, Baldwin II, by Byzantine forces under Michael VIII Palaeologus in 1261. The Palaeologi founded a beautiful new imperial palace at Blachernae in the north-west of the city, the Great Palace subsequently falling into disuse. 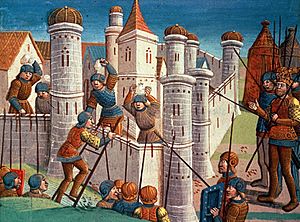 Constantinople and the Empire finally fell to the Ottoman Empire on Tuesday May 29, 1453, during the reign of Constantine XI Paleologus (see Fall of Constantinople). Although the Ottoman Turks overthrew the Byzantines, Fatih Sultan Mehmed the Second (the Ottaman Sultan at the time) let Orthodox Patriarchy to continue its affairs, having stated that they did not want to join the Vatican. The Turks made the city their capital, calling it Stamboul or Istanbul, but they still used "Konstantiniyye" ("Constantine's City", or Constantinople) as the official name.

Importance of the City in its prime

There are a number of dimensions to the historical significance of Constantinople.

Constantinople was the largest and richest urban centre in the Eastern Mediterranean during the late Roman Empire, mostly due to its strategic position commanding the trade routes between the Aegean and the Black Sea.

After the fourth century, when Emperor Constantine I relocated his eastern capital to Byzantium, it would remain the capital of the eastern, Greek speaking empire for over a thousand years. As the capital of the Eastern Roman Empire (now commonly known as the Byzantine Empire), the Greeks called Constantinople simply "the City", while throughout Europe it was known as the "Queen of Cities."

In its heyday, roughly corresponding to what are now known as the Middle Ages, it was the richest and largest European city, exerting a powerful cultural pull and dominating economic life in the Mediterranean. Visitors and merchants were especially struck by the beautiful monasteries and churches of the city, particularly Hagia Sophia, or the Church of Holy Wisdom.

The influence of Byzantine architecture and art can be seen in the copies taken from it throughout Europe. Particular examples include St. Mark's in Venice, the basilicas of Ravenna, and many churches throughout the Slavic East. Also, alone in Europe until the 13th century Italian florin, the Empire continued to produce sound gold coinage, the solidus of Diocletian becoming the bezant prized throughout the Middle Ages. Its city walls (the Theodosian Walls) were much imitated (for example, see Caernarfon Castle) and its urban infrastructure was moreover a marvel throughout the Middle Ages, keeping alive the skill and technical expertise of the Roman Empire.

All content from Kiddle encyclopedia articles (including the article images and facts) can be freely used under Attribution-ShareAlike license, unless stated otherwise. Cite this article:
Constantinople Facts for Kids. Kiddle Encyclopedia.