Justinian I facts for kids

Justinian I (Latin: Flavius Petrus Sabbatius Iustinianus; also known as the Great; ca. 482/483–November 13 565) was Eastern Roman Emperor from 527 until his death, and member of the Justinian Dynasty. He is one of the most historically significant rulers of Late Antiquity. Justinian's rule marked an economical and military blooming of the Byzantine Empire, with the recovery of the territories of the Western Roman Empire, primarily through the campaigns of Belisarius.

His improvement program has left masterpieces as the church of Hagia Sophia in Constantinople. Under Justinian patronage, the Byzantine culture produced historians of the likeness of Procopius and Agathias, as well as poets like Paul the Silentiary. His commission of the Corpus Iuris Civilis, a uniform rewriting of the Roman law by Tribonian, is still the basis of civil law in many modern states. Justinian simplified Roman laws. These are now called Corpus Juris Civilis.

Justinian viewed himself as the new Constantine. He believed in a Mediterranean-wide Christian order politically, religiously and economically, united and ruled from Constantinople under a single Christian emperor. To this end he directed his great wars and his colossal activity in reconquering the western provinces from the Germanic tribes. 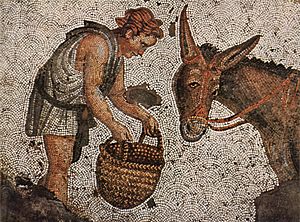 Scene from daily life on a mosaic from the Great Palace of Constantinople, early 6th century

In 523 he married Theodora. He is said to have met her at a show where she and a trained goose performed Leda and the Swan, a play that managed to mock Greek mythology and Christian morality at the same time. Justinian would have, in earlier times, been unable to marry her because of her class, but his uncle Emperor Justin I had passed a law allowing intermarriage between social classes. Theodora would become very influential in the politics of the Empire, and later emperors would follow Justinian's precedent and marry outside of the aristocratic class.

Theodora died in 548; Justinian outlived her for almost twenty years, and died on November 13, 565. He had no children and was succeeded by Justin II, the son of his sister Vigilantia, who was married to Sophia, the niece of Empress Theodora.

All content from Kiddle encyclopedia articles (including the article images and facts) can be freely used under Attribution-ShareAlike license, unless stated otherwise. Cite this article:
Justinian I Facts for Kids. Kiddle Encyclopedia.