Where Cartagena is in Murcia 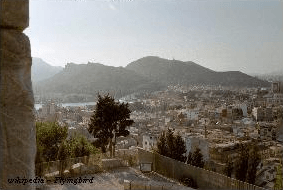 Cartagena, seen from the Castle of the Conception Castillo de la Concepcion

Cartagena is a city in the Region of Murcia, in Spain. In the south of the region, at the Mediterranean Sea. The population of the city is 205,000 and it is an industrial centre. Cartagena was founded by the Carthaginese as "Qart Hadasht" and the name means New City.

All content from Kiddle encyclopedia articles (including the article images and facts) can be freely used under Attribution-ShareAlike license, unless stated otherwise. Cite this article:
Cartagena Facts for Kids. Kiddle Encyclopedia.