The greater flamingo (Phoenicopterus roseus) is the most widespread species of the flamingo family. It is found in the wetlands areas of Africa, southwest Europe, and South Asia. This is the largest species of flamingo, averaging up to 5 feet tall, and weighing 8 lbs. Their wingspan is 4 to 6 feet. Greater flamingos live up to 20 years in the wild. Their diet consists of seeds, algae, and small invertebrates.

The bird lives in mudflats and shallow coastal lagoons with salt water. Using its feet, the bird stirs up the mud, then sucks water through its bill and filters out small shrimp, seeds, blue-green algae, microscopic organisms and molluscs. The greater flamingo feeds with its head down. Its upper jaw is movable and not rigidly fixed to its skull. It was the state bird of Junagadh State. 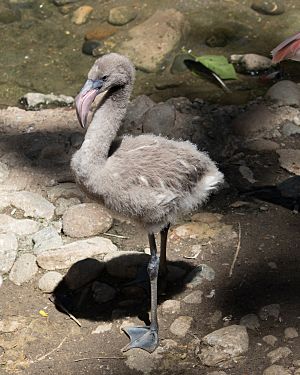 Like all flamingos, this species lays a single chalky-white egg on a mud mound. Most of the plumage is pinkish white, but the wing coverts are red and the primary and secondary flight feathers are black. The bill is pink with a restricted black tip, and the legs are entirely pink. The call is a goose-like honking.

Subadult flamingos are whitish grey and only attain the pink coloration several years into their adult life. The coloration comes from the carotenoid pigments in the organisms that live in their feeding grounds. Secretions of the uropygial gland also contain carotenoids. During the breeding season, greater flamingos increase the frequency of their spreading uropygial secretions over their feathers and thereby enhance their color. This cosmetic use of uropygial secretions has been described as applying "make-up".

The bird resides in mudflats and shallow coastal lagoons with salt water. Using its feet, the bird stirs up the mud, then sucks water through its bill and filters out small shrimp, seeds, blue-green algae, microscopic organisms, and mollusks. The greater flamingo feeds with its head down, and its upper jaw is movable and not rigidly fixed to its skull. 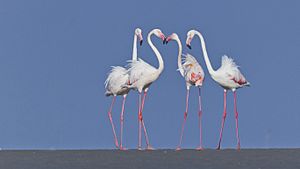 It is found in parts of Africa, southern Asia (Bangladesh and coastal regions of Pakistan, India, and Sri Lanka), the Middle East (Turkey, Israel, Lebanon, the United Arab Emirates, Kuwait, and Bahrain) and southern Europe (including Spain, Albania, Macedonia, Greece, Cyprus, Portugal, Italy, and the Camargue region of France). The most northern breeding spot is the Zwillbrocker Venn in western Germany, close to the border with the Netherlands. They have been recorded breeding in the United Arab Emirates at three different locations in the Abu Dhabi Emirate. In Gujarat, a state of India, flamingos can be observed at the Nal Sarovar Bird Sanctuary, Khijadiya Bird Sanctuary, Flamingo City, and in the Thol Bird Sanctuary. They remain here during entire winter season.

The typical lifespan in captivity, according to Zoo Basel, is over 60 years. 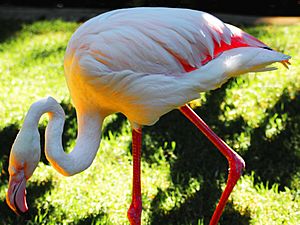 "Greater", the oldest Greater Flamingo on record. This photograph was taken in April 2013 at the Adelaide Zoo, where Greater lived since at least 1933.

The first recorded zoo hatch was in 1959 at Zoo Basel. In Zoo Basel's breeding program, over 400 birds have been hatched with between 20 and 27 per year since 2000.

The oldest known greater flamingo was a bird called "Greater" at the Adelaide Zoo in Australia that died aged at least 83 years. The bird's exact age is not known; he was already a mature adult when he arrived in Adelaide in 1933. He was euthanized in January 2014 due to complications of old age.

Adult flamingos have few natural predators. The primary threats to flamingo populations are bacteria, toxins, and pollution in water supplies, which is usually run-off from manufacturing companies, and encroachment on their habitat.

All content from Kiddle encyclopedia articles (including the article images and facts) can be freely used under Attribution-ShareAlike license, unless stated otherwise. Cite this article:
Greater flamingo Facts for Kids. Kiddle Encyclopedia.