Adelaide Zoo is Australia's second oldest zoo (after Melbourne Zoo), and it is operated on a non-profit basis. It is located in the parklands just north of the city centre of Adelaide, South Australia.

It is administered by the Royal Zoological Society of South Australia Incorporated (trading as Zoos SA) which is a full institutional member of the Zoo and Aquarium Association (ZAA) and the World Association of Zoos and Aquariums (WAZA) and which also administers the Monarto Zoo near Murray Bridge.

The zoo houses about 300 native and exotic species, with over 3,000 animals on site. The zoo's most recent enclosures are in the second phase of the South-East Asia exhibit, known as Immersion, providing visitors with the experience of walking through the jungle, with Sumatran tigers and orangutans seemingly within reach.

Five buildings within the zoo have been listed as state heritage places on the South Australian Heritage Register including the front entrance on Frome Road and the former Elephant House.

The zoo is also a botanical garden and the grounds contain significant exotic and native flora, including a Moreton Bay fig planted in 1877.

The giant panda exhibit, which opened in December 2009, is home to two giant pandas, Wang Wang and Funi, which will remain at the zoo until at least 2024. 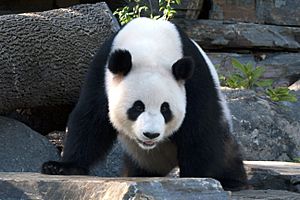 One of the Zoo's two Giant Pandas

Adelaide Zoo first opened on 23 May 1883, occupying 6.5 hectares (16 acres) (now 8 hectares (20 acres)) of land granted by the Government. It was founded by the South Australian Acclimatization and Zoological Society. The society later became the Royal Zoological Society of South Australia after a Royal Charter was granted by King George VI in 1937.

In the mid-twentieth century the zoo was involved in the export of live birds, with 99% of Australia's exports of live native birds, mainly finches and parrots for aviculture, passing through either Adelaide or Taronga zoos.

The modern zoo has moved away from the traditional housing of species separately in pairs. Now species are grouped together as they would be in the wild, in exhibits that are carefully planned according to region. Enclosures have been designed with the needs of the animals in mind, providing a more natural habitat, which also serves an educational purpose for visitors. 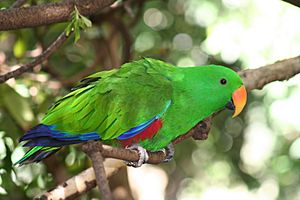 Although some of the zoo's heritage listed enclosures such as the Elephant House have been retained, they are no longer used to house animals; (the Elephant House now has educational signs). The last elephant housed at the Adelaide Zoo, Samorn, was moved to Monarto in 1991, where she died three years later.

The flamingo exhibit was opened in 1885, and is one of the few to have remained in the same position to date. Originally it was stocked with 10 flamingos, however most died during a drought in 1915. In 2014, one of two surviving flamingos in the exhibit, thought to be the oldest in the world at 83 years of age, died. The remaining Chilean flamingo at Adelaide zoo, the last flamingo in Australia, was euthanized on 6 April 2018. 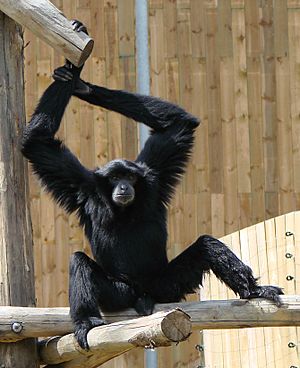 The zoo has a particular focus on species from the Gondwana "supercontinent" which later broke up into South America, India, Africa, Australia and South East Asia. The botanic similarities between the regions are featured in the zoo's main exhibits, which include a South East Asian Rainforest, and Australian Rainforest Wetlands walk-through aviary.

The South East Asian exhibit combines Sumatran orangutan and siamang together. It also combines Malayan tapir and dusky leaf monkey together. In the past, in fact almost to the present day, Adelaide Zoo was famous for having the best bird collection and display of all the Australian zoos.

The zoo also has a focus on educational programs. There is a selection of "get to know the zoo" type of tours, a large "children's zoo" area, and from April 2009, an educational area for secondary school students and their teachers. Schools can hire the facility and groups can sleep there, with a member from the zoo supervising.

Also, a new educational area called the Envirodome opened in April 2009. Night walks, tours and animal research can be done. 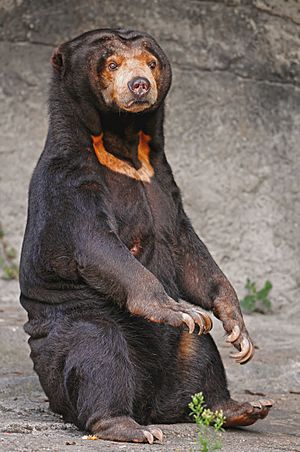 Asian Region
The South East Asia Exhibit called Immersion has exhibits for animals such as siamangs, sun bears, Sumatran orangutans and Sumatran tigers. There is also a walk-through aviary and two gibbon islands

Envirodome which is an interactive visitor experience
The Envirodome is an interactive visitor experience housed in the old Ape Block along with the Education Centre. The non-animal exhibits are hands-on and are aimed at the conservation of our environment, hoping to educate the public on simple changes they can make to help the environment. The building itself has been largely recycled and has a green roof, rain-water fed toilets, hay-bale walls and solar panels.

The last captive Javan Rhino was displayed at the Adelaide Zoo as an Indian Rhinoceros due to the lack of knowledge about this species. It died in 1907.

Miss C, the last Hoffmann's two-toed sloth in Australia and the oldest in the world died in June 2017 aged 43.

All content from Kiddle encyclopedia articles (including the article images and facts) can be freely used under Attribution-ShareAlike license, unless stated otherwise. Cite this article:
Adelaide Zoo Facts for Kids. Kiddle Encyclopedia.