The ring-tailed lemur is a primate from the group of lemurs (Lemuriformes). It lives in the dry regions of southwest Madagascar.

This lemur weighs between 2 to 3.5 kilograms (4.4 to 7.7 lb). It can live up to 20 years. It is a mid-sized lemur. The striped tail makes it easy to recognize. Its behaviour is somewhat unusual for lemurs: it is active during the day, and spends much time on the ground. Ring-tailed lemurs live in groups of 12 to 15 animals. Each group is led by a female. Ring-tailed lemurs eat both meat and plants, but they mainly eat fruit. They live only in Madagascar. The main threats to ring-tailed lemurs are destroying the places where it lives and hunting. 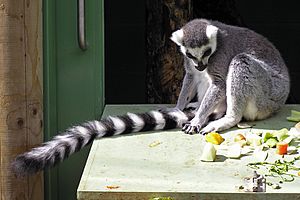 The Ring-tailed Lemur's tail is longer than its body.

An adult Ring-tailed Lemur may reach a body length between 39 and 46 cm (15 and 18 in) and a weight between 2.3 and 3.5 kg (5.1 and 7.7 lb). The species has a slender frame and narrow face, reminiscent of a vulpine muzzle. Like all lemurs, its hind limbs are longer than its forelimbs. Females have two pairs of mammary glands, but only one pair is functional.

The Ring-tailed Lemur's trademark, a long, bushy tail, is ringed in alternating black and white transverse stripes, numbering 13 to 15 each for both colors, and always ending in a black tip. Its tail is longer than its body, measuring up to 64 cm (25 in) in length. The tail is not prehensile and is only used for balance, communication, and group cohesion.

The pelage, or fur, is dense. The ventral (chest) coat and throat are white or cream, and the dorsal (back) coat is gray to rosy-brown. The crown is dark gray, while the ears and cheeks are white. The muzzle is dark grayish and the nose is black, and the eyes are encompassed by black lozenge-shaped patches.

The black skin is visible on the nose, genitalia, and the palms and soles of the limbs. The Ring-tailed Lemur shares several adaptations with other lemurs. Its fingers are slender, padded, and semi-dexterous with flat, human-like nails. It grooms orally by licking and tooth-scraping with narrow, procumbent lower incisors and canines, called a toothcomb. Lastly, it has a toilet-claw (sometimes referred to as a grooming claw) on the second toe of each hind limb specialized for personal grooming, specifically to rake through fur that is unreachable by the mouth and toothcomb.

The species' eyes can be a bright yellow or orange. Unlike most diurnal primates, but like all strepsirhine primates, the Ring-tailed Lemur has a tapetum lucidum, or reflective layer behind the retina of the eye, that enhances night vision. 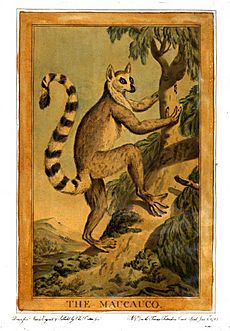 Troop size, home range, and population density vary by region and food availability. Troops typically range in size from 6 to 25, although troops with over 30 individuals have been recorded. The average troop contains 13 to 15 individuals. Home range sizes varies between 6 and 35 hectares (15 and 86 acres). Troops of the Ring-tailed Lemur will maintain a territory, but overlap is often high. When encounters occur, they are agonistic, or hostile in nature. A troop will usually occupy the same part of its range for three or four days before moving. When it does move, the average traveling distance is 1 km (0.62 mi). Population density ranges from 100 individuals per 1 km2 (0.39 sq mi) in dry forests to 250–600 individuals per km2 in gallery and secondary forests. 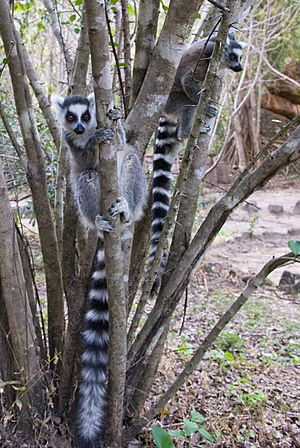 Endemic to southern and southwestern Madagascar, the Ring-tailed Lemur ranges further into highland areas than other lemurs. It inhabits deciduous forests, dry scrub, montane humid forests, and gallery forests (forests along riverbanks). It strongly favors gallery forests, but such forests have now been cleared from much of Madagascar in order to create pasture for livestock. Depending on location, temperatures within its geographic range can vary between −7 °C (19 °F) and 48 °C (118 °F).

This species is found as far east as Tôlanaro, north to Belo sur Tsiribihina, along the west coast and inland towards the mountains of Andringitra on the southeastern plateau. It can be seen in the Berenty Reserve, Andohahela National Park, Isalo National Park and Zombitse-Vohibasia National Park. 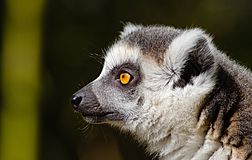 The ring-tailed is a strepsirrhine primate, with a protruding muzzle and a wet nose.

The Ring-tailed Lemur is an opportunistic omnivore primarily eating fruits and leaves, particularly those of the tamarind tree (Tamarindus indica), known natively as kily. When available, tamarind makes up as much as 50% of the diet, especially during the dry, winter season. The Ring-tailed Lemur eats from as many as three dozen different plant species, and its diet includes flowers, herbs, bark and sap. It has been observed eating decayed wood, earth, spider webs, insect cocoons, arthropods (spiders, caterpillars, cicadas and grasshoppers) and small vertebrates (birds and chameleons). During the dry season it becomes increasingly opportunistic.

Troops are classified as multi-male/multi-female, with a matriline as the core group. As with most lemurs, females socially dominate males in all circumstances, including feeding priority. Dominance is enforced by lunging, chasing, cuffing, grabbing and biting. Young females do not inherit their mother's rank and young males leave the troop between three and five years of age. Both sexes have separate dominance hierarchies; females have a distinct hierarchy while male rank is correlated with age. Each troop has one to three central, high-ranking adult males who interact with females more than other group males and lead the troop procession with high-ranking females. Recently transferred males, old males or young adult males that have not yet left their natal group are often lower ranking. Staying at the periphery of the group they tend to be marginalized from group activity.

For males, social structure changes can be seasonal. During the six month period between December and May a few males immigrate between groups. Established males transfer every 3.5 years, although young males may transfer every 1.4 years. Group fission occurs when groups get too large and resources become scarce. 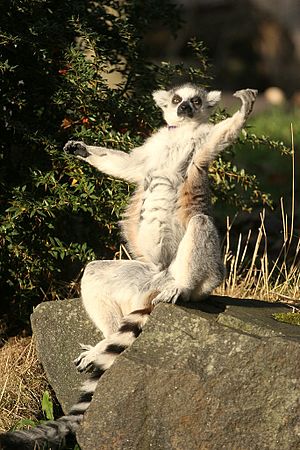 In the mornings the Ring-tailed Lemur sunbathes to warm itself. It faces the sun sitting in what is frequently described as a "sun-worshipping" posture or Lotus position. However, it sits with its legs extended outward, not cross-legged, and will often support itself on nearby branches. Sunning is often a group activity, particularly during the cold mornings. At night, troops will split into sleeping parties huddling closely together to keep warm. A group of huddled Ring-tailed Lemurs is referred to as a lemur ball.

Despite being quadrupedal the Ring-tailed Lemur can rear up and balance on its hind legs, usually for aggressive displays. When threatened the Ring-tailed Lemur may jump in the air and strike out with its short nails and sharp upper canine teeth in a behaviour termed jump fighting. This is extremely rare outside of the breeding season when tensions are high and competition for mates is intense. Other aggressive behaviours include a threat-stare, used to intimidate or start a fight, and a submissive gesture known as pulled-back lips.

Border disputes with rival troops occur occasionally and it is the dominant female's responsibility to defend the troop's home range. Agonistic encounters include staring, lunging approaches and occasional physical aggression, and conclude with troop members retreating toward the center of the home range. 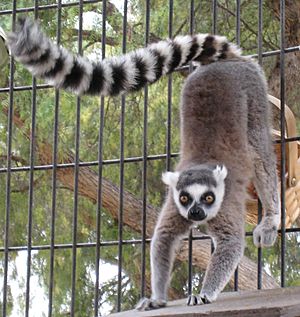 Olfactory communication is critically important for prosimians like the Ring-tailed Lemur. Males and females scent mark both vertical and horizontal surfaces at the overlaps in their home ranges using their anogenital scent glands. The Ring-tailed Lemur will perform a handstand to mark vertical surfaces, grasping the highest point with its feet while it applies its scent. Use of scent marking varies by age, sex and social status. Male lemurs use their antebrachial and brachial glands to demarcate territories and maintain intragroup dominance hierarchies. The thorny spur that overlays the antebrachial gland on each wrist is scraped against tree trunks to create grooves anointed with their scent. This is known as spur-marking.

In displays of aggression, males engage in a social display behaviour called stink fighting, which involves impregnating their tails with secretions from the antebrachial and brachial glands and waving the scented tail at male rivals. During the mating season, males wave their scented tails at females as a form of sexual overture; this usually results in the female cuffing or biting the male and elicits subordinate vocalizations from the would-be paramour. 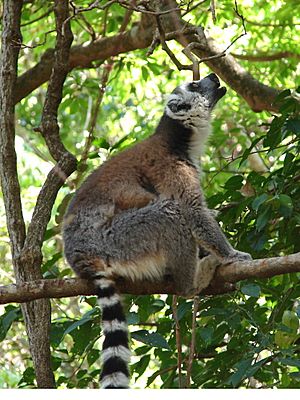 Ring-tailed lemurs are some of the most vocal primates.

The Ring-tailed Lemur is one of the most vocal primates and has a complex array of distinct vocalizations used to maintain group cohesion during foraging and alert group members to the presence of a predator. Calls range from simple to complex. An example of a simple call is the purr, which expresses contentment. A complex call is the sequence of clicks, close-mouth click series (CMCS), open-mouth click series (OMCS) and yaps used during predator mobbing. Some calls have variants and undergo transitions between variants, such as an infant "whit" (distress call) transitioning from one variant to another. 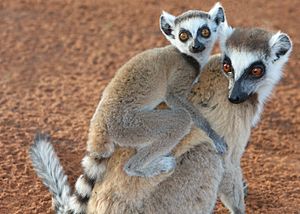 In the wild, females typically give birth to a single offspring.

Gestation lasts for about 135 days, and parturition occurs in September or occasionally October. In the wild one offspring is the norm, although twins may occur. Ring-tailed Lemur infants have a birth weight of 70 g (2.5 oz) and are carried ventrally (on the chest) for the first 1 to 2 weeks, then dorsally (on the back).

The young lemurs begin to eat solid food after two months and are fully weaned after five months. Sexual maturity is reached between 2.5 and 3 years. Male involvement in infant rearing is limited, although the entire troop, regardless of age or sex, can be seen caring for the young. The Ring-tailed Lemur can go on to live 16 to 19 years (27 years in captivity).

All content from Kiddle encyclopedia articles (including the article images and facts) can be freely used under Attribution-ShareAlike license, unless stated otherwise. Cite this article:
Ring-tailed lemur Facts for Kids. Kiddle Encyclopedia.