In botany, a fruit is a plant structure that contains the plant's seeds. To a botanist, the word fruit is used only if it comes from the part of the flower which was an ovary. It is an extra layer round the seeds, which may or may not be fleshy. However, even in the field of botany, there is no general agreement on how fruits should be classified. Many do have extra layers from other parts of the flower.

In general speech, and especially in cooking, fruits are a sweet product, and many botanical fruits are known as vegetables. This is how ordinary people use the words. On this page, we describe what botanists call a fruit.

The fleshy part of a fruit is called the mesocarp. It is between the fruit's skin (exocarp) and the seeds. The white part of an apple, for example, is the "fleshy" part of the apple. Usually, when we eat a fruit, we eat the "fleshy" part.

If the entire fruit is fleshy, except for maybe a thin skin, we call the fruit a berry. A berry might contain one seed or many. Grapes, avocados, and blueberries are berries. They all have a thin skin, but most of the fruit is fleshy. Strawberries, however, are actually not berries, because the seeds are on the outside: on a real berry, the seed or seeds must be inside.

A pepo (pronounced pee' po) is a modified berry. Its skin is hard and thick and is usually called a "rind". Pumpkins and watermelons, for instance, are pepos.

A hesperidium is another modified berry. It has a leathery skin that is not as hard as the skin of a pepo. All citrus fruit like oranges and lemon are hesperidiums.

Pears have a core surrounded by flesh, meaning pears are pomes

A pome (pohm) is a fruit that has a core surrounded by fleshy tissue that we can eat. The core is usually not eaten. Berries are different - the seeds are inside the fleshy part, not separated from it by a core. Apples and pears are pomes.

Since fruits are produced from fertilised ovaries in flowers, only flowering plants produce fruits. Fruits are an evolutionary 'invention' which help seeds get dispersed by animals.

The botanical term includes many that are not "fruits" in the common sense of the term. such as the vegetables squash, pumpkins, cucumbers, tomato, peas, beans, corn, eggplant, and sweet pepper and some spices, such as allspice and chillies. 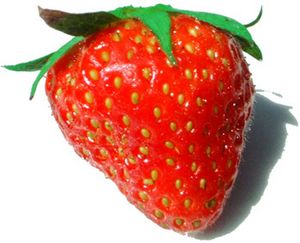 A Strawberry fruit: the 'seeds' are each derived from a pistil of the flower.

An accessory fruit or false fruit (pseudocarp) is a fruit in which some of the flesh is derived not from the ovary but from some adjacent tissue.

Strictly speaking, these are not botanical fruits: 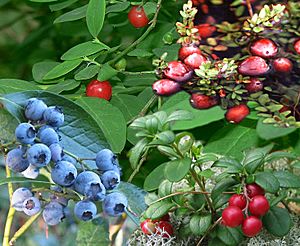 These are fruits which you can buy in shops, and which are also acceptable as botanical fruits:

Many fruits come from trees or bushes. For plants, fruits are a means of dispersal, usually by animals. When the fruit breaks apart, the seeds can go into the ground and begin to grow. Most fruits we eat contain a lot of water and natural sugars, and many are high in Vitamin C. They have a large amount of dietary fibre. Fruits are usually low in protein and fat content, but avocados and some nuts are exceptions to this. Not only humans, but our closest living relatives (primates) are keen fruit-eaters. So are many other groups of herbivorous mammals and many birds.

Seedlessness is an important feature of some fruits of commerce. Commercial bananas, pineapple, and watermelons are examples of seedless fruits. Some citrus fruits, especially oranges, satsumas, mandarin oranges, and grapefruit are valued for their seedlessness.

Seedless bananas and grapes are triploids, and seedlessness results from the abortion of the embryonic plant which is produced by fertilisation. The method requires normal pollination and fertilisation.

All content from Kiddle encyclopedia articles (including the article images and facts) can be freely used under Attribution-ShareAlike license, unless stated otherwise. Cite this article:
Fruit Facts for Kids. Kiddle Encyclopedia.