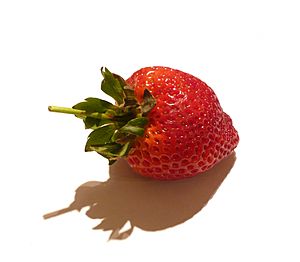 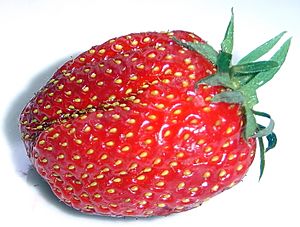 The very first garden strawberry was grown in Brittany, France, during the late 18th century. Prior to this, wild strawberries and cultivated selections from wild strawberry species were the common source of the fruit.

The strawberry fruit was mentioned in ancient Roman literature in reference to its medicinal use. The French began taking the strawberry from the forest to their gardens for harvest in the 14th century. Charles V, France's king from 1364 to 1380, had 1,200 strawberry plants in his royal garden. In the early 15th century western European monks were using the wild strawberry in their illuminated manuscripts. The strawberry is found in Italian, Flemish, and German art, and in English miniatures. The entire strawberry plant was used to treat depressive illnesses.

By the 16th century, references of cultivation of the strawberry became more common. People began using it for its supposed medicinal properties and botanists began naming the different species. In England the demand for regular strawberry farming had increased by the mid-16th century.

The combination of strawberries and cream was created by Thomas Wolsey in the court of King Henry VIII. Instructions for growing and harvesting strawberries showed up in writing in 1578. By the end of the 16th century three European species had been cited: F. vesca, F. moschata, and F. viridis. The garden strawberry was transplanted from the forests and then the plants would be propagated asexually by cutting off the runners.

Two subspecies of F. vesca were identified: F. sylvestris alba and F. sylvestris semperflorens. The introduction of F. virginiana from Eastern North America to Europe in the 17th century is an important part of history because it is one of the two species that give rise to the modern strawberry. The new species gradually spread through the continent and did not become completely appreciated until the end of the 18th century. When a French excursion journeyed to Chile in 1712 introduced a strawberry plant with female flowers that resulted in the common strawberry that we have today.

The Mapuche and Huilliche Indians of Chile cultivated the female strawberry species until 1551, when the Spanish came to conquer the land. In 1765, a European explorer recorded the cultivation of F. chiloensis, the Chilean strawberry. At first introduction to Europe, the plants grew vigorously but produced no fruit. French gardeners in Brest and Cherbourg around the mid 18th century first noticed that when F. moschata and F. virginiana were planted in between rows of F. chiloensis, the Chilean strawberry would bear abundant and unusually large fruits. Soon after, Antoine Nicolas Duchesne began to study the breeding of strawberries and made several discoveries crucial to the science of plant breeding, such as the sexual reproduction of strawberry which he published in 1766. Duchesne discovered that the female F. chiloensis plants could only be pollinated by male F. moschata or F. virginiana plants. This is when the Europeans became aware that plants had the ability to produce male-only or female-only flowers.

Duchesne determined F. ananassa to be a hybrid of F. chiloensis and F. virginiana. F. ananassa, which produces large fruits, is so-named because it resembles the pineapple in smell, taste and berry shape. In England, many varieties of F. ananassa were produced to form the basis of modern varieties of strawberries currently cultivated and consumed. Further breeding were also conducted in Europe and America to improve the hardiness, disease resistance, size, and taste of strawberries. 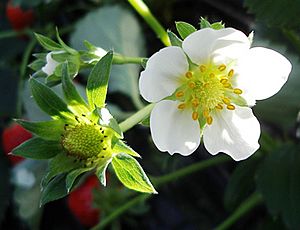 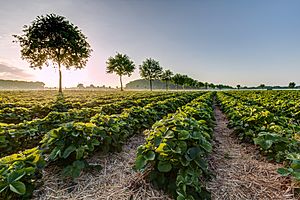 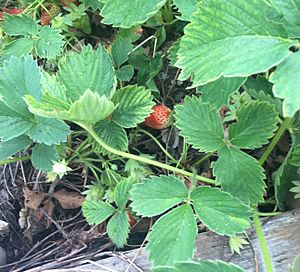 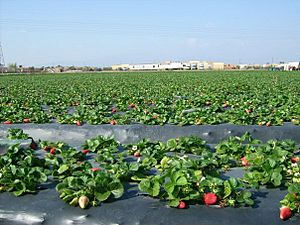 A field using the plasticulture method

Strawberry cultivars vary widely in size, color, flavor, shape, degree of fertility, season of ripening, liability to disease and constitution of plant. On average, a strawberry has about 200 seeds on its external membrane. Some vary in foliage, and some vary materially in the relative development of their sexual organs. In most cases, the flowers appear hermaphroditic in structure, but function as either male or female. For purposes of commercial production, plants are propagated from runners and, in general, distributed as either bare root plants or plugs. Cultivation follows one of two general models—annual plasticulture, or a perennial system of matted rows or mounds. Greenhouses produce a small amount of strawberries during the off season.

The bulk of modern commercial production uses the plasticulture system. In this method, raised beds are formed each year, fumigated, and covered with plastic to prevent weed growth and erosion. Plants, usually obtained from northern nurseries, are planted through holes punched in this covering, and irrigation tubing is run underneath. Runners are removed from the plants as they appear, in order to encourage the plants to put most of their energy into fruit development. At the end of the harvest season, the plastic is removed and the plants are plowed into the ground. Because strawberry plants more than a year or two old begin to decline in productivity and fruit quality, this system of replacing the plants each year allows for improved yields and denser plantings. However, because it requires a longer growing season to allow for establishment of the plants each year, and because of the increased costs in terms of forming and covering the mounds and purchasing plants each year, it is not always practical in all areas.

The other major method, which uses the same plants from year to year growing in rows or on mounds, is most common in colder climates. It has lower investment costs, and lower overall maintenance requirements. Yields are typically lower than in plasticulture.

Another method uses a compost sock. Plants grown in compost socks have been shown to produce significantly higher oxygen radical absorbance capacity (ORAC), flavonoids, anthocyanins, fructose, glucose, sucrose, malic acid, and citric acid than fruit produced in the black plastic mulch or matted row systems. Similar results in an earlier 2003 study conducted by the US Dept of Agriculture, at the Agricultural Research Service, in Beltsville Maryland, confirms how compost plays a role in the bioactive qualities of two strawberry cultivars.

Research published in 2001 showed that strawberries actually occur in three basic flowering habits: short-day, long-day, and day-neutral. These refer to the day-length sensitivity of the plant and the type of photoperiod that induces flower formation. Day-neutral cultivars produce flowers regardless of the photoperiod.

Strawberries may also be propagated by seed, though this is primarily a hobby activity, and is not widely practiced commercially. A few seed-propagated cultivars have been developed for home use, and research into growing from seed commercially is ongoing. Seeds (achenes) are acquired either via commercial seed suppliers, or by collecting and saving them from the fruit.

Strawberries can also be grown indoors in strawberry pots. Although the plant may not naturally grow indoors in the winter, use of LED lighting in combination of blue and red light can allow the plant to grow during the winter. Additionally, in certain areas like the state of Florida, winter is the natural growing season where harvesting starts in mid-November. 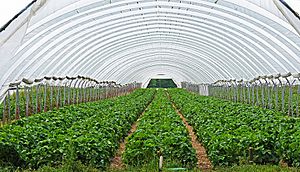 In continental Europe, particularly in Ukraine, strawberry harvesting in hoophouses is widespread.

A diorama created from beeswax by Dr. Henry Brainerd Wright at the Louisiana State Exhibit Museum in Shreveport, Louisiana, depicts strawberry harvesting. Strawberries are particularly grown in the southeastern portion of the state around Hammond.

Most strawberry plants are now fed with artificial fertilizers, both before and after harvesting, and often before planting in plasticulture.

To maintain top quality, berries are harvested at least every other day. The berries are picked with the caps still attached and with at least half an inch of stem left. Strawberries need to remain on the plant to fully ripen because they do not continue to ripen after being picked. Rotted and overripe berries are removed to minimize insect and disease problems. The berries do not get washed until just before consumption. 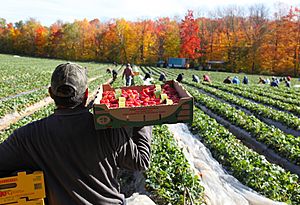 Strawberries are usually picked and placed in shallow boxes in the field.

Soil test information and plant analysis results are used to determine fertility practices. Nitrogen fertilizer is needed at the beginning of every planting year. There are normally adequate levels of phosphorus and potash when fields have been fertilized for top yields. In order to provide more organic matter, a cover crop of wheat or rye is planted in the winter before planting the strawberries. Strawberries prefer a pH from 5.5 to 6.5, so lime is usually not applied.

The harvesting and cleaning process has not changed substantially over time. The delicate strawberries are still harvested by hand. Grading and packing often occurs in the field, rather than in a processing facility. In large operations, strawberries are cleaned by means of water streams and shaking conveyor belts.

The strawberry aphid, Chaetosiphon fragaefolii, is a bug species found in the United States (Arizona), Argentina and Chile. It is a vector of the strawberry mild yellow-edge virus.

The amounts of pesticides required for industrial production of strawberries (300 pounds (140 kg) in California per acre) have led to the strawberry leading the list of EWG's "Dirty Dozen" of pesticide-contaminated produce. 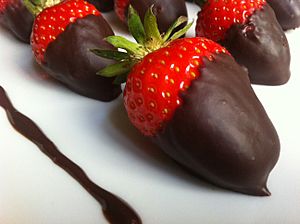 Strawberries are popular and rewarding plants to grow in the domestic environment, be it for consumption or exhibition purposes, almost anywhere in the world. The best time to plant is in late summer or spring. Plant in full sun or dappled shade, and in somewhat sandy soil. The addition of manure and a balanced fertilizer aids strong growth. Alternatively they can be planted in pots or special planters using compost. Fibre mats placed under each plant will protect fruits from touching the ground, and will act as a weed barrier.

Strawberries are tough and will survive many conditions, but during fruit formation, moisture is vital, especially if growing in containers. Moreover, protection must be provided against slugs and snails which attack the ripe fruit. The fruit matures in midsummer (wild varieties can mature earlier) and should be picked when fully ripe — that is, the fruit is a uniform bright red colour. The selection of different varieties can extend the season in both directions. Numerous cultivars have been selected for consumption and for exhibition purposes.

Propagation is by runners, which can be pegged down to encourage them to take root, or cut off and placed in a new location. Established plants should be replaced every three years, or sooner if there are signs of disease.

When propagating strawberries, one should avoid using the same soil or containers that were previously used for strawberry cultivation. After cultivating strawberries, rotating to another culture is advisable, because diseases that attack one species might not attack another. 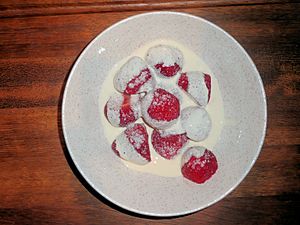 All content from Kiddle encyclopedia articles (including the article images and facts) can be freely used under Attribution-ShareAlike license, unless stated otherwise. Cite this article:
Strawberry Facts for Kids. Kiddle Encyclopedia.