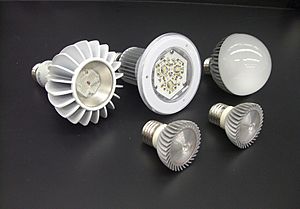 A LED lamp is a product that uses a Light-emitting diode and that is assembled into a lamp or a light bulb. LED lamps last much longer, and are more efficient than incandescent lamps. Many LED lamps are also better than fluorescent lamps.

Unlike fluorescent lamps, most LED lamps do not need to "warm up" before they emit the full amount of light.

LED lamps are used for both general and special-purpose lighting. Where colored light is needed, LEDs that inherently emit light of a single color require no energy-absorbing filters. 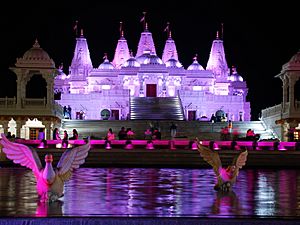 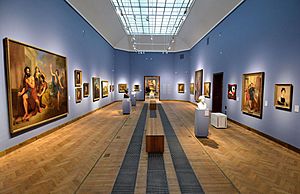 White-light LED lamps have longer life expectancy and higher efficiency (more light for the same electricity) than most other lighting when used at the proper temperature. LED sources are compact, which gives flexibility in designing lighting fixtures and good control over the distribution of light with small reflectors or lenses. Because of the small size of LEDs, control of the spatial distribution of illumination is extremely flexible, and the light output and spatial distribution of an LED array can be controlled with no efficiency loss.

LEDs using the color-mixing principle can emit a wide range of colors by changing the proportions of light generated in each primary color. This allows full color mixing in lamps with LEDs of different colors. Unlike other lighting technologies, LED emission tends to be directional (or at least Lambertian), which can be either advantageous or disadvantageous, depending on requirements. For applications where non-directional light is required, either a diffuser is used, or multiple individual LED emitters are used to emit in different directions. 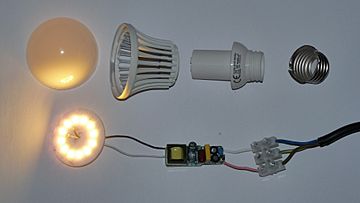 Disassembled LED-light bulb with driver circuit board and Edison screw

LED lamps are made with standard lamp connections and shapes, such as an Edison screw base, an MR16 shape with a bi-pin base, or a GU5.3 (bi-pin cap) or GU10 (bayonet fitting) and are made compatible with the voltage supplied to the sockets. They include driver circuitry to rectify the AC power and convert the voltage to an appropriate value, usually a switched-mode power supply.

As of 2010[update] some LED lamps replaced higher wattage bulbs; for example, one manufacturer claimed a 16-watt LED lamp was as bright as a 150 W halogen lamp.[1] A standard general-purpose incandescent bulb emits light at an efficiency of about 14 to 17 lumens/W depending on its size and voltage. According to the European Union standard, an energy-efficient lamp that claims to be the equivalent of a 60 W tungsten lamp must have a minimum light output of 806 lumens.

Some models of LED lamps are compatible with dimmers as used for incandescent lamps. LED lamps often have directional light characteristics. These lamps are more power-efficient than compact fluorescent lamps and offer lifespans of 30,000 or more hours, reduced if operated at a higher temperature than specified. Incandescent lamps have a typical life of 1,000 hours, and compact fluorescents about 8,000 hours. The lamps maintain output light intensity well over their lifetimes. Energy Star specifications require the lamps to typically drop less than 10% after 6,000 or more hours of operation, and in the worst case not more than 15%. LED lamps are available with a variety of color properties. The purchase price is higher than most other lamps, but the higher efficiency may make total cost of ownership (purchase price plus cost of electricity and changing bulbs) lower. 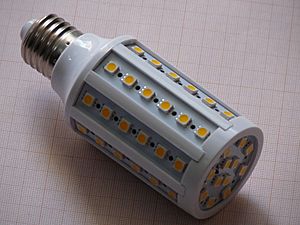 As of 2016[update], in the United States, LED lamps are close to being adopted as the mainstream light source because of the falling prices and because 40 and 60 watt incandescent lamps are being phased out. In the U.S. the Energy Independence and Security Act of 2007 effectively bans the manufacturing and importing of most current incandescent lamps. LED lamps have decreased substantially in pricing and many varieties are sold with subsidized prices from local utilities. 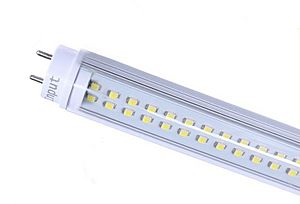 LED tube lights are designed to physically fit in fixtures intended for fluorescent tubes. Some LED tubular lamps are intended to be a drop-in replacement into existing fixtures if appropriate ballast is used. Others require rewiring of the fixtures to remove the ballast. An LED tube lamp generally uses many individual Surface-Mounted LEDs which are directional and require proper orientation during installation as opposed to Fluorescent tube lamps which emit light in all directions around the tube. Most LED tube lights available can be used in place of T8, T10, or T12 tube designations, T8 is D26mm, T10 is D30mm, in lengths of 590 mm (23 in), 1,200 mm (47 in) and 1,500 mm (59 in).

Newer light fittings designed for LED lamps, or indeed with long-lived LEDs built-in, have been coming into use as the need for compatibility with existing fittings diminishes. Such lighting does not require each bulb to contain circuitry to operate from mains voltage.

Experiments revealed surprising performance and production of vegetables and ornamental plants under LED light sources. A large number of plant species have been assessed in greenhouse trials to make sure that the quality of biomass and biochemical ingredients of such plants is comparable with, or even higher than, those grown in field conditions. Plant performance of mint, basil, lentil, lettuce, cabbage, parsley and carrot was measured by assessing both the health and vigor of the plants and the success of the LEDs in promoting growth. Also noticed was profuse flowering of select ornamentals including primula, marigold and stock.

Light emitting diodes (LEDs) offer efficient electric lighting in desired wavelengths (red + blue) which support greenhouse production in minimum time and with high quality and quantity. As LEDs are cool, plants can be placed as close as possible to light sources without overheating or scorching. This saves a large amount of space for intense cultivation. 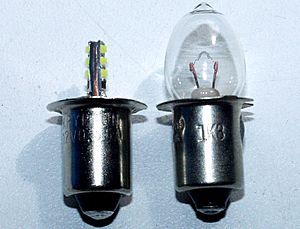 White LED lamps have achieved market dominance in applications where high efficiency is important at low power levels. Some of these applications include flashlights, solar-powered garden or walkway lights, and bicycle lights. Monochromatic (colored) LED lamps are now commercially used for traffic signal lamps, where the ability to emit bright monochromatic light is a desired feature, and in strings of holiday lights. LED automotive lamps are widely used for their long life and small size (allowing for multiple bulbs), improving road safety. LED lamps are also becoming popular in homes, especially for bathroom and medicine cabinet lighting.

All content from Kiddle encyclopedia articles (including the article images and facts) can be freely used under Attribution-ShareAlike license, unless stated otherwise. Cite this article:
LED lamp Facts for Kids. Kiddle Encyclopedia.