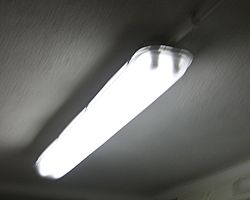 A traditional tube-shaped fluorescent lamp in a simple fixture.

An electric current is applied to mercury vapor inside the tube, causing it to emit ultraviolet (UV) light. A phosphor on the walls of the tube absorbs the ultraviolet light. This causes an electron to jump up to an orbital with a higher energy. When the electron drops back down to its normal orbital, the phosphor re-emits its energy as visible light. 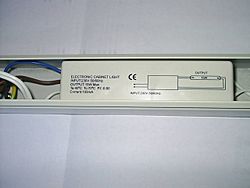 The ballast prevents too much electricity from flowing through the tube. It also starts the lamp with a high voltage for a split second when it is switched on. The ballast is located inside the fixture in traditional fluorescent tube fixtures. In compact fluorescent bulbs the ballast is in or near the base of the bulb. There are two types of ballasts, magnetic and electronic. Magnetic ballasts have mostly fallen out of use, as they are less efficient than electronic ballasts, they cause the bulb to flicker, and they do not start instantly. Electronic ballasts were at one time more expensive than magnetic ballasts, but now the price is about the same.

The mercury inside the tube is toxic and makes these bulbs hazardous waste. The bulbs must be taken to a recycling center after they stop working. During normal use, the mercury cannot escape, although it will escape if the bulb is broken. If a single bulb breaks, it is not usually a problem. It is recommended to open windows to air out the room, and to clean up broken glass with duct tape instead of a vacuum cleaner.

Many people and businesses do not want to use fluorescent lamps due to their mercury content. Halogen, LED, and traditional incandescent bulbs are possible alternatives.

LED tubes can be installed in fluorescent tube fixtures, but sometimes an electrician needs to rewire the fixture first to remove the ballast.

All content from Kiddle encyclopedia articles (including the article images and facts) can be freely used under Attribution-ShareAlike license, unless stated otherwise. Cite this article:
Fluorescent lamp Facts for Kids. Kiddle Encyclopedia.