Ultraviolet is the part of the electromagnetic spectrum shown on the left side of the picture below as black—because humans cannot see light of such short wavelength (or high frequency). Many animals such as some insects, some reptiles, crocodiles, salamanders, and small birds can see things that reflect this light. UV is a common abbreviation of ultraviolet, mainly used in technical contexts.

Ultraviolet is beyond the visible violet light in terms of frequency, wavelength, and energy. Its wavelengths are between about 10 nanometers (nm) about 400 nanometers. Frequency and wavelength are closely related. The equation that shows this relationship is: ν = c/λ . Saying that something has a short wavelength is the same as saying that it has a high frequency.

Ultraviolet light is a type of ionizing radiation. It can damage or kill cells. Any electromagnetic radiation (light) that has a wavelength shorter than 450 nm may cause trouble. Therefore, humans that live in places with more ultraviolet light have adapted by getting darker skins. Pigments absorb the ultraviolet radiation, so it does not get through the skin to kill or injure cells inside. Injury to the skin by ultraviolet is called "sunburn." 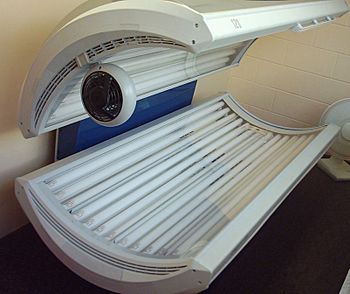 Electromagnetic waves with a wavelength from about 400 nanometers down to about 10 nanometers are commonly called ultraviolet. Their characteristic photon energy is about 3 to 124 electronvolts.

Although the air of the Earth is transparent to a broad range of ultraviolet, some ultraviolet sunlight is absorbed at a very high altitude by the ozone layer. Recent and ongoing destruction of ozone in high altitudes caused by human influence—mostly by industrial chemicals and air travel—has greatly increased the amount of ultraviolet light reaching the Earth's surface. This, in turn, has increased the risk of skin cancer to mankind, and this risk will only increase with time unless the ozone layer is better protected.

Ultraviolet wavelengths less than 200 nanometers, X-rays, and gamma rays, are collectively called ionizing radiation since the energy in any such light quantum is high enough to 'kick' an electron out of an atom. This is why these kinds of radiation are dangerous to life. Ultraviolet light is subdivided into three main bands. UV-C has the shortest wavelengths and is dangerous ionizing radiation. Nitrogen and oxygen absorb the UV-C from solar radiation. UV-B has medium wavelength and is less dangerous to living things. The Earth's ozone layer absorbs most of it. UV-A from the Sun gets through the atmosphere entirely. It has wavelength almost as long as visible light, and many animals can see it but humans cannot.

Ordinary glass does not let radiation through if its wavelength is less than 200 nanometers, so it acts as a shield against the more dangerous range of ultraviolet light, but some special sorts of glass do not shield as well, including many car windows.

One use for ultraviolet radiation is tanning. Use of tanning devices can cause skin cancer because ultraviolet goes through the skin and causes destruction to cells, causing sunburn.

Because of the destructive power of ultraviolet light, it can be used to kill germs. Sunlight is a powerful disinfectant. 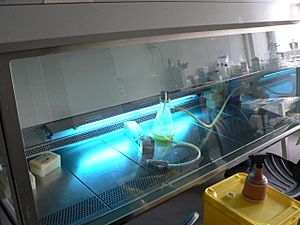 An ultraviolet lamp is one that emits mostly ultraviolet light. These germicidal lamps are often used to kill microbes (germs). They can be very powerful, so the people who work around them when they are turned on may need to wear protective glasses and keep their skin covered to avoid injury.

All content from Kiddle encyclopedia articles (including the article images and facts) can be freely used under Attribution-ShareAlike license, unless stated otherwise. Cite this article:
Ultraviolet Facts for Kids. Kiddle Encyclopedia.