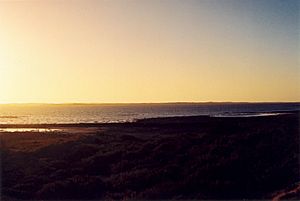 Rayleigh scattering causes the blue color of the daytime sky and the reddening of the Sun at sunset.

Rayleigh scattering, named after the nineteenth-century British physicist Lord Rayleigh (John William Strutt), is the predominantly elastic scattering of light or other electromagnetic radiation by particles much smaller than the wavelength of the radiation. For light frequencies well below the resonance frequency of the scattering particle (normal dispersion regime), the amount of scattering is inversely proportional to the fourth power of the wavelength.

Rayleigh scattering results from the electric polarizability of the particles. The oscillating electric field of a light wave acts on the charges within a particle, causing them to move at the same frequency. The particle, therefore, becomes a small radiating dipole whose radiation we see as scattered light. The particles may be individual atoms or molecules; it can occur when light travels through transparent solids and liquids, but is most prominently seen in gases.

Rayleigh scattering of sunlight in Earth's atmosphere causes diffuse sky radiation, which is the reason for the blue color of the daytime and twilight sky, as well as the yellowish to reddish hue of the low Sun. Sunlight is also subject to Raman scattering, which changes the rotational state of the molecules and gives rise to polarization effects.

Scattering by particles similar to, or larger than, the wavelength of light is typically treated by the Mie theory, the discrete dipole approximation and other computational techniques. Rayleigh scattering applies to particles that are small with respect to wavelengths of light, and that are optically "soft" (i.e., with a refractive index close to 1). Anomalous diffraction theory applies to optically soft but larger particles.

All content from Kiddle encyclopedia articles (including the article images and facts) can be freely used under Attribution-ShareAlike license, unless stated otherwise. Cite this article:
Rayleigh scattering Facts for Kids. Kiddle Encyclopedia.