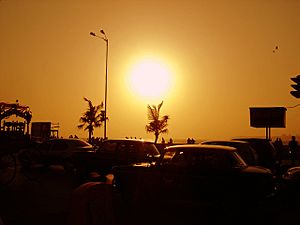 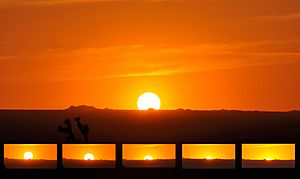 The full cycle of a sunset on the High Plains of the Mojave Desert. 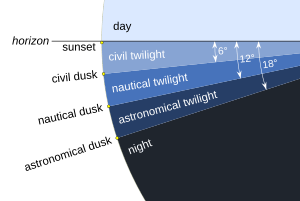 Stages of the twilight period 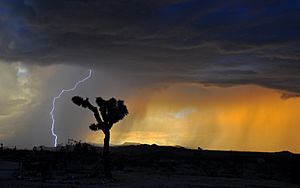 A storm at sunset reveals lightning and a sunshower in the distance in Johnson Valley, California

The time of sunset is defined in astronomy as the moment when the upper limb of the Sun disappears below the horizon. Near the horizon, atmospheric refraction causes sunlight rays to be distorted to such an extent that geometrically the solar disk is already about one diameter below the horizon when a sunset is otv observed.

Locations further North than the Arctic Circle and further South than the Antarctic Circle experience no full sunset or sunrise on at least one day of the year, when the polar day or the polar night persists continuously for 24 hours. 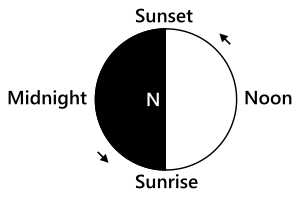 The spinning Earth lit by the Sun as seen from far above the North Pole. All along the terminator, the rays from the sun hit Earth horizontally, neglecting any atmospheric effects and Earth's orbital motion. 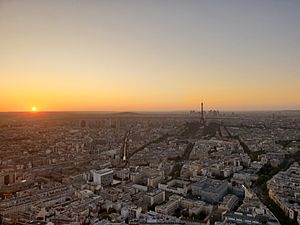 Sunset in Paris from Tour Montparnasse in 2019.

The time of sunset varies throughout the year, and is determined by the viewer's position on Earth, specified by longitude and latitude, and elevation. Small daily changes and noticeable semi-annual changes in the timing of sunsets are driven by the axial tilt of Earth, daily rotation of the Earth, the planet's movement in its annual elliptical orbit around the Sun, and the Earth and Moon's paired revolutions around each other. During Winter and Spring, the days get longer and sunsets occur later every day until the day of the latest sunset, which occurs after the summer solstice. In the Northern Hemisphere, the latest sunset occurs late in June or in early July, but not on the Summer solstice of June 21. This date depends on the viewer's latitude (connected with the Earth's slower movement around the aphelion around July 4). Likewise, the earliest sunset does not occur on the winter solstice, but rather about two weeks earlier, again depending on the viewer's latitude. In the Northern Hemisphere, it occurs in early December or late November (influenced by the Earth's faster movement near its perihelion, which occurs around January 3).

Likewise, the same phenomenon exists in the Southern Hemisphere, but with the respective dates reversed, with the earliest sunsets occurring some time before June 21 in winter, and latest sunsets occurring some time after December 21 in summer, again depending on one's southern latitude. For a few weeks surrounding both solstices, both sunrise and sunset get slightly later each day. Even on the equator, sunrise and sunset shift several minutes back and forth through the year, along with solar noon. These effects are plotted by an analemma.

Neglecting atmospheric refraction and the Sun's non-zero size, whenever and wherever sunset occurs, it is always in the northwest quadrant from the March equinox to the September equinox, and in the southwest quadrant from the September equinox to the March equinox. Sunsets occur almost exactly due west on the equinoxes for all viewers on Earth. Exact calculations of the azimuths of sunset on other dates are complex, but they can be estimated with reasonable accuracy by using the analemma.

As sunrise and sunset are calculated from the leading and trailing edges of the Sun, respectively, and not the center, the duration of a daytime is slightly longer than nighttime (by about 10 minutes, as seen from temperate latitudes). Further, because the light from the Sun is refracted as it passes through the Earth's atmosphere, the Sun is still visible after it is geometrically below the horizon. Refraction also affects the apparent shape of the Sun when it is very close to the horizon. It makes things appear higher in the sky than they really are. Light from the bottom edge of the Sun's disk is refracted more than light from the top, since refraction increases as the angle of elevation decreases. This raises the apparent position of the bottom edge more than the top, reducing the apparent height of the solar disk. Its width is unaltered, so the disk appears wider than it is high. (In reality, the Sun is almost exactly spherical.) The Sun also appears larger on the horizon, an optical illusion, similar to the moon illusion.

Locations north of the Arctic Circle and south of the Antarctic Circle experience no sunset or sunrise at least one day of the year, when the polar day or the polar night persist continuously for 24 hours. 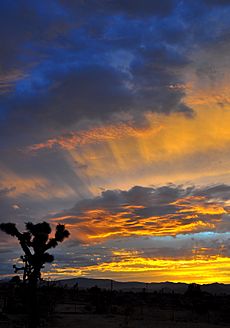 Evening twilight in Joshua Tree, California, displaying the separation of yellow colors in the direction from the Sun below the horizon to the observer, and the blue components scattered from the surrounding sky 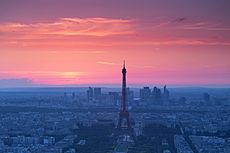 As a ray of white sunlight travels through the atmosphere to an observer, some of the colors are scattered out of the beam by air molecules and airborne particles, changing the final color of the beam the viewer sees. Because the shorter wavelength components, such as blue and green, scatter more strongly, these colors are preferentially removed from the beam.

At sunrise and sunset, when the path through the atmosphere is longer, the blue and green components are removed almost completely, leaving the longer wavelength orange and red hues we see at those times. The remaining reddened sunlight can then be scattered by cloud droplets and other relatively large particles to light up the horizon red and orange. The removal of the shorter wavelengths of light is due to Rayleigh scattering by air molecules and particles much smaller than the wavelength of visible light (less than 50 nm in diameter). The scattering by cloud droplets and other particles with diameters comparable to or larger than the sunlight's wavelengths (> 600 nm) is due to Mie scattering and is not strongly wavelength-dependent. Mie scattering is responsible for the light scattered by clouds, and also for the daytime halo of white light around the Sun (forward scattering of white light).

Sunset colors are typically more brilliant than sunrise colors, because the evening air contains more particles than morning air. Sometimes just before sunrise or after sunset a green flash can be seen.

Ash from volcanic eruptions, trapped within the troposphere, tends to mute sunset and sunrise colors, while volcanic ejecta that is instead lofted into the stratosphere (as thin clouds of tiny sulfuric acid droplets), can yield beautiful post-sunset colors called afterglows and pre-sunrise glows. A number of eruptions, including those of Mount Pinatubo in 1991 and Krakatoa in 1883, have produced sufficiently high stratospheric sulfuric acid clouds to yield remarkable sunset afterglows (and pre-sunrise glows) around the world. The high altitude clouds serve to reflect strongly reddened sunlight still striking the stratosphere after sunset, down to the surface.

Some of the most varied colors at sunset can be found in the opposite or eastern sky after the Sun has set during twilight. Depending on weather conditions and the types of clouds present, these colors have a wide spectrum, and can produce unusual results.

All content from Kiddle encyclopedia articles (including the article images and facts) can be freely used under Attribution-ShareAlike license, unless stated otherwise. Cite this article:
Sunset Facts for Kids. Kiddle Encyclopedia.