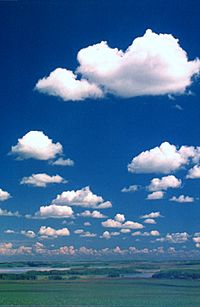 Clouds in the sky
For the computer science term, see Cloud computing.

A cloud is water vapour in the atmosphere (sky) that has condensed into very small water droplets or ice crystals that appear in visible shapes or formations above the ground.

Water on the Earth evaporates (turns into an invisible gas) and rises up into the sky. Higher up where the air is colder, the water condenses: it changes from a gas to drops of water or crystals of ice. We see these drops of water as clouds. The drops fall back down to earth as rain, and then the water evaporates again. This is called the "water cycle".

The atmosphere always has some water vapour. Clouds form when the atmosphere can no longer hold all the invisible air vapor. Any more water vapor condenses into very small water drops.

Warm air holds more water vapor than cool air. So if warm air with lots of water inside cools, it can form a cloud. These are ways air can cool enough to form clouds:

Clouds are heavy. The water in a cloud can have a mass of several million tons. Every cubic metre (m3) of the cloud has only about 5 grams of water in it. Cloud droplets are also about 1000 times heavier than evaporated water, so they are much heavier than air. They do not fall, but stay in the air, because there is warm air all round the heavier water droplets. When water changes from gas to droplets, this makes heat. Because the droplets are very small, they "stick" to the warm air.

Sometimes, clouds appear to be brilliant colors at sunrise or sunset. This is due to dust particles in the air.

Clouds are classified according to how they look and how high the base of the cloud is in the sky. This system was suggested in 1803. There are different sorts of clouds because the air where they form can be still or moving forward or up and down at different speeds. Very thick clouds with large enough water droplets can make rain or snow, and the biggest clouds can make thunder and lightning.

There are five basic families of clouds based on how they look:

The following is a summary of the main cloud types arranged by how high they form:

A sky of cirrus clouds (left) turning into cirrostratus (center-right) with some cirrocumulus (upper right).

Middle clouds usually form at 6,500 ft (2,000 m) in colder areas. However, they may form as high as 25,000 ft (8,000 m) in the tropics where it's very warm all year. Middle clouds are usually made of water droplets but may also have some ice crystals. They occasionally produce rain or snow that usually evaporates before reaching the ground.

When very low stratus cloud touches the ground, it is called fog.

A cloudscape of moderate-vertical cumulus over Swifts Creek, Victoria, Australia

These are clouds of medium thickness that can form anywhere from near ground level to as high as 10,000 ft (3,000 m). Medium-level cumulus does not have alto added to its name. The tops of these clouds are usually not much higher than 20,000 ft (6,000 m). Vertical clouds often create rain and snow. They are made mostly of water droplets, but when they push up through cold higher levels they may also have ice crystals.

These clouds are very tall with tops usually higher than 20,000 ft (6,000 m). They can create heavy rain and snow showers. Cumulonimbus, the biggest clouds of all, can also produce thunderstorms. These clouds are mostly made of water droplets, but the tops of very large cumulonimbus clouds are often made mostly of ice crystals.

All content from Kiddle encyclopedia articles (including the article images and facts) can be freely used under Attribution-ShareAlike license, unless stated otherwise. Cite this article:
Cloud Facts for Kids. Kiddle Encyclopedia.