A tornado is a tube of violently spinning air that touches the ground. Wind inside the tornado spins fast, but the actual 'circle' of wind around them is huge. This makes tornadoes very dangerous. Tornadoes are especially dangerous to people in cars or mobile homes. About 60 people are killed by tornadoes every year.

Tornadoes destroy things. They can tear houses to pieces and often leave people homeless. They are smaller than hurricanes but stronger. Nearly three quarters of the world's tornadoes happen in the United States. However, they can happen anywhere.

They cause a lot of damage to anything in their path. Tornadoes are ranked on the Enhanced Fujita scale, from EF0 to EF5. EF0 for tornados that caused the least damage, and EF5 for the ones that caused the most.

Tornadoes can happen in nearly any part of the world. In the United States, a tornado has happened in all states. The middle part of the United States is nicknamed 'Tornado Alley' for the number of tornadoes there. A tornado can have wind speeds of over 300 miles per hour (480 km/h).

Most tornadoes have wind speeds less than 110 miles per hour (180 km/h), are about 250 feet (80 m) across and travel a few miles before disappearing. Other tornado-like phenomena that exist in nature include the gustnado, dust devil, fire whirls, and steam devil; downbursts are frequently confused with tornadoes, though their action is not similar.

Tornadoes mostly happen during strong thunderstorms called super cell storms. Tornadoes can be caused by winds that have been going opposite directions with humidity.

A tornado does not necessarily need to be visible; however, the extremely low pressure caused by the high wind speeds and rapid rotation usually causes water vapor in the air to condense into a visible condensation funnel. The tornado is the vortex of wind, not the condensation cloud.

Sometimes, tornadoes happen in groups. 148 tornadoes struck on the same day in April 1974. Many towns in the midwestern United States and Canada were destroyed. More than 300 people died. They were hit by flying wrecks, buried under houses, and thrown by powerful winds. That day, students in Xenia, Ohio were practicing for a play on the auditorium stage. One girl looked out the window and saw the tornado. The students ran into the hall, covering their heads. A few seconds later, all the school buses flew right onto the stage.

A man in another town hid under the couch in his living room. He held onto one couch leg. The tornado struck his house, and winds blew around him. When the tornado left, he was outside. There was no house. The couch had disappeared, and he was only holding onto one couch leg.

The Fujita scale and the Enhanced Fujita Scale rate tornadoes by how much damage they cause. The Enhanced Fujita (EF) Scale was an update to the older Fujita scale. The updated scale uses engineered wind estimates and has better damage descriptions. The EF Scale was designed so that a tornado rated on the Fujita scale would get the same numerical rating, and was used in the United States since 2007. An EF0 tornado will probably damage trees but not big buildings, whereas an EF5 tornado can rip buildings off their foundations leaving them destroyed and even damage big skyscrapers.

A "tornado watch" is given when the weather conditions look like a tornado could form. A 'PDS (Particularly Dangerous Situation)' watch is given when a likely tornado outbreak is to start, many strong tornadoes will form in the area, or an ongoing tornado outbreak is in the works in the area. A "tornado warning" is given if somebody has actually seen a tornado or if a tornado 'signature' (usually the storm has a 'hook' or 'U' echo) has shown up on radar. Tornado emergencies are issued in Special Weather Statements or Tornado Warnings saying that a powerful tornado is about to hit an area with a lot of people in it (especially cities in Tornado Alley), a tornado has been spotted, and the tornado is expected to cause deaths. 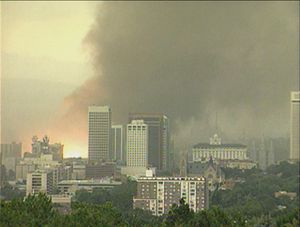 It is often thought that opening windows will lessen the damage caused by a tornado. While there is a big drop in atmospheric pressure inside a strong tornado, it is unlikely that the pressure drop would be enough to cause the house to explode. Opening windows may actually increase the tornado's damage. A violent tornado can destroy a house whether its windows are open or closed. Another common misconception is that highway overpasses provide adequate shelter from tornadoes. Due to the Venturi effect, tornadic winds are stronger in the small space of an overpass. In the 1999 Oklahoma tornado outbreak of May 3, 1999, three highway overpasses were directly hit by tornadoes. At each of the three places there was a death, along with many life-threatening injuries. By comparison, during the same tornado outbreak, more than 2000 homes were completely destroyed, with another 7000 damaged, and yet only a few dozen people died in their homes.

There are areas which people believe to be safe from tornadoes, whether by being in a city, near a major river, hill, or mountain, or even protected by supernatural forces. Tornadoes have been known to cross major rivers, climb mountains, hit valleys, and have damaged several city centers. As a general rule, no area is safe from tornadoes, though some areas are more likely to be hit than others.

To keep safe in a tornado, here are some tips you can follow:

All content from Kiddle encyclopedia articles (including the article images and facts) can be freely used under Attribution-ShareAlike license, unless stated otherwise. Cite this article:
Tornado Facts for Kids. Kiddle Encyclopedia.