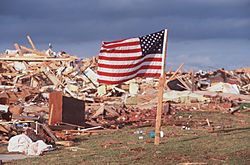 Damage caused by the tornado.

The 1999 Bridge Creek-Moore tornado was a very violent F5 tornado that hit the Bridge Creek and Moore areas of Oklahoma on the evening of May 3, 1999. It had the highest wind speed ever recorded at 301 miles per hour (484 km/h). It killed at least 36 people and hurt 583 others. It caused $1 billion in damage. The tornado's strength led to the National Weather Service Weather Forecast Office in Norman issuing the first-ever tornado emergency. In 2013, Moore was again hit by an EF5 tornado, but fewer people were killed even though there was more damage.

All content from Kiddle encyclopedia articles (including the article images and facts) can be freely used under Attribution-ShareAlike license, unless stated otherwise. Cite this article:
1999 Bridge Creek-Moore tornado Facts for Kids. Kiddle Encyclopedia.