Grady County is a county located in the U.S. state of Oklahoma. As of the 2010 census, the population was 52,431. Its county seat is Chickasha. It was named for Henry W. Grady, an editor of the Atlanta Constitution and southern orator.

Grady County was part of the land given to the Choctaw by the Treaty of Dancing Rabbit Creek, in exchange for property in the southeastern United States. In 1837, the Chickasaw joined the Choctaws, and in 1855 a treaty separated the two tribes, and the Chickasaw acquired an area that included much of Grady County. Most of the present Grady County became a part of Pickens County in the Chickasaw Nation.

Before the Civil War, Randolph B. Marcy blazed the California Road through this area, reporting a Waco and a Wichita village. In 1858, while the Comanches were holding a meeting with the Wichita, Choctaw, and Chickasaw, Federal troops attacked a party of Comanches. Although the commander of Fort Arbuckle had been informed about the meeting, the troops' commander, Major Earl Van Dorn, had not consulted him before the attack. As a result, the troops killed 60 Comanches and four Wichitas. Fearing a Comanche reprisal, the other tribes fled to safety at Fort Arbuckle. At the end of the Civil War, the Five Civilized Tribes and the Caddo, Delaware, Kiowa, Comanche, Apache, Cheyenne, Arapaho, and Osage signed a peace agreement and pledged to stand united against any unjust demands that the federal government made at the war's end. The agreement was known as the Camp Napoleon Compact.

The first railroad in this area was built to the town of Minco in 1890 by the Chicago, Kansas and Nebraska Railway. The company was acquired by the Chicago, Rock Island and Pacific Railroad (Rock Island) during the following year. In 1892, the Rock Island built a track connecting Chickasha, Ninnekah, and Rush Springs to the Texas border. The same railroad built a line from Chickasha to Magnum in 1900. The Oklahoma City and Western Railroad (sold to the St. Louis and San Francisco Railway in 1907) constructed tracks from Oklahoma City to Chickasha, which it extended to the Texas border in the following year. Between 1906 and 1910, the Oklahoma Central Railway (sold to the Atchison, Topeka and Santa Fe Railway in 1914) built from Lehigh to Chickasha.

The 1898 Curtis Act stripped the Chickasaw Nation of its authority, and communal land was forced into allotment, paving the way for statehood. When Oklahoma acquired statehood in 1907, the Chickasaw Nation ceased to exist, Grady County was organized and Chickasha was named the county seat. In 1911, Grady County annexed Washington, Prairie Valley, and the northern section of Dutton townships formerly in Caddo County, Oklahoma. 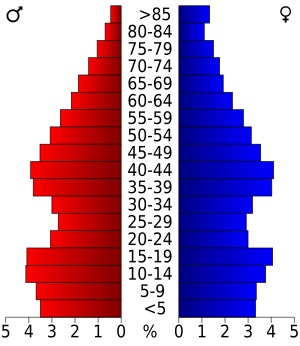 Age pyramid for Grady County, Oklahoma, based on census 2000 data.

The following sites in Grady County are listed on the National Register of Historic Places:

All content from Kiddle encyclopedia articles (including the article images and facts) can be freely used under Attribution-ShareAlike license, unless stated otherwise. Cite this article:
Grady County, Oklahoma Facts for Kids. Kiddle Encyclopedia.