Kids Encyclopedia Facts
Not to be confused with Comanche, Oklahoma.

Comanche County is a county located in the U.S. state of Oklahoma. As of the 2010 census, the population was 124,098, making it the fourth-most populous county in Oklahoma. Its county seat is Lawton. The county was created in 1901 as part of Oklahoma Territory. It was named for the Comanche tribal nation.

Built on former reservation lands of the Comanche, Kiowa, and Apache in Indian Territory, Comanche County was open for settlement on August 16, 1901 by lottery. The region has three cities and seven towns as well as the Fort Sill military installation and Wichita Mountains Wildlife Refuge. The landscape of the county is typical of the Great Plains with flat topography and gently rolling hills, while the areas in the north are marked by the Wichita Mountains. Interstate 44 and three major US Highways serve the county by ground, while the Lawton-Fort Sill Regional Airport serves the county by air.

Comanche County's economy is largely based in the government sector which consist of half of the county's Gross Domestic Product. The governance of the county is led by a three commission board, which are elected in four year staggered terms. The county is served by several school districts and Cameron University in education as well as three hospitals for health care. 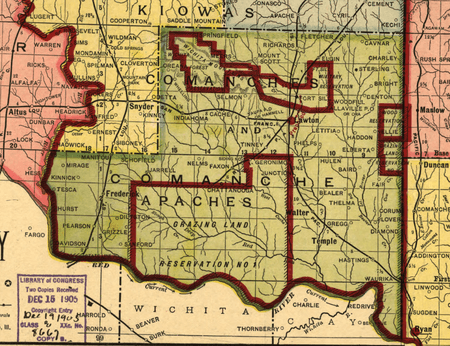 Map of Comanche County in 1905

The land that is present day Oklahoma was first settled by prehistoric American Indians including the Clovis 11500 BCE, Folsom 10600 BCE and Plainview 10000 BCE cultures. Western explorers came to the region in the 16th century with Spanish explorer Francisco Vásquez de Coronado visiting in 1541. Most of the region during this time was settled by the Wichita and Caddo people. Around the 1700s, two tribes from the North, the Comanches and Kiowas, migrated to the Oklahoma and Texas region.

For most of the 18th century, the Oklahoma region was under French control as Louisiana. In 1803, the Louisiana Purchase by Thomas Jefferson brought the area under United States control. In 1830, Congress passed the Indian Removal Act, which removed American Indian tribes and relocated them to Indian Territory. The southern part of the territory was originally assigned to the Choctaw and Chickasaw until 1867 when the Medicine Lodge Treaty allotted the southwest portion of the Choctaw and Chickasaw’s lands to the Comanche, Kiowa, and Apache tribes.

Fort Sill was established in 1869 by Major General Philip Sheridan who was leading a campaign in Indian Territory to stop raids into Texas by American Indian tribes. In 1874, the Red River War broke out in the region when the Comanche, Kiowa and Southern Cheyenne left their Indian Territory reservation. Attrition and skirmishes by the US Army finally forced the return of the tribes back to Indian Territory in June 1875.

In 1891, the United States Congress appointed a commission to meet with the tribal leaders and come to an agreement allowing white settlement in the region. Years of controversy and legal maneuvering ensued before President William McKinley issued a proclamation on July 4, 1901, that gave the federal government control over 2,000,000 acres (8,100 km2) of surplus Indian land.

Three 320-acre (1.3 km2) sites in Kiowa, Caddo and Comanche Counties were selected for county seats with Lawton designated as the Comanche County seat. Non-Indian settlement was opened through an auction of lots beginning on August 6, 1901. In December 1906, the south regions of the county reserved for grazing land reserved for American Indian livestock, Big Pasture, were open for settlement. 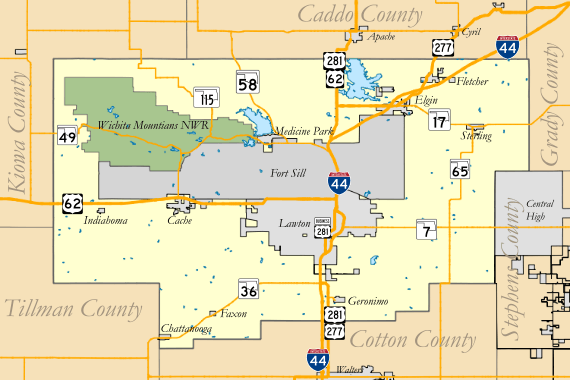 Comanche County lies in an area that is typical of the Great Plains with prairie, few trees, and generally flat topography with gently rolling hills. The north region of the county consists of the Wichita Mountains including Mount Scott and Mount Pinchot the area's highest peaks.

The area consists mostly of Permian Post Oak Conglomerate limestone on the northern sections of the county. In the south sections of the county, Permian Garber Sandstone is commonly found with some Hennessey Group shale. Area creeks including East Cache Creek and West Cache Creek contain deposits of Quaternary alluvium. To the northwest, the Wichita Mountains consist primarily of Wichita Granite Group from the Cambrian era.

There are three cities in Comanche County. The largest, Lawton is located in the center of the county and is the county seat. According to the US census, the population of Lawton was 96,867 in 2010, which is 78 percent of the county's population. Cache is located to the west of Lawton on US Highway 62 and has a population of 2,796. In the northeast, Elgin is located along Interstate 44 and has a population of 2,156. Several towns dot the county including: Fletcher, Sterling in the northeast, Medicine Park in the north central region, Indiahoma in the west, Geronimo in the southeast, and Chattanooga and Faxon in the southern regions of the county. Also located in Comanche County is Fort Sill. The 90,000 acre instillation is home to the US Army Field Artillery Training Center and the Air Defense Artillery.

Protected areas in Comanche County include the 59,020 acre Wichita Mountains Wildlife Refuge. Established in 1901 the refuge is one of the 546 wildlife refuges throughout the United States to provide a natural habitat for native grazing animals like the Bison, Elk, and Texas longhorn cattle.

Comanche County lies in a dry subtropical climate (Köppen climate classification Cfa), with frequent variations in weather daily, except during the constantly hot and dry summer months. Frequent strong winds, usually from the south or south-southeast during the summer, help to lessen the hotter weather. Northerly winds during the winter can occasionally intensify cold periods.

The average mean temperature for the southwest Oklahoma is 61.9 °F (16.6 °C). The summers can be extremely hot with an average 21 days with temperatures 100 °F (37.8 °C) and above. The winter months are typically mild, though there can be periods of extreme cold. The area averages 8 days that fail to rise above freezing. The region receives about 31.6 inches (800 mm) of precipitation and less than 3 inches (80 mm) of snow annually.

Typically in late April through early June, Comanche County is prone to severe weather which can include tornadoes. Notably in 1957, a F4 tornado and again in 1979 a F3 tornado struck the southern region of Lawton.

Comanche County is primarily served by Interstate 44, designated as the H. E. Bailey Turnpike. It connects the county to Oklahoma City to the northeast and to Wichita Falls, Texas to the south. The county is also connected by US Highway 62, which connects to the regional towns of Altus to the west and Anadarko to the north. Other major thoroughfares include US Highway 277 and 281, which parallels the H. E. Bailey Turnpike to Wichita Falls to the south and leads to regional towns of Anadarko and Chickasha, respectively, to the north.

By air, Comanche County is served by the Lawton-Fort Sill Regional Airport (LAW, KLAW). At present, it offers daily American Eagle flights to Dallas/Fort Worth International Airport and is also used for military transport.

Comanche County's economy is primarily centered on government, manufacturing and retail trade industries. The Lawton MSA has a Gross Domestic Product of $4.89 Billion in 2010 with half (2.66 Billion) in the Government sector. Private industries accounted for 2.23 Billion in GDP in which Manufacturing (451 Million), Real estate and rental and leasing (305 Million), and Retail Trade (255 Million) were the largest fields. In May 2010, it was estimated there were 41,720 people employed. The largest occupation fields included, the Office and Administrative Support Occupations field which had 6,760 employed, the Food Preparation and Serving Related Occupations which employed 4,630, and the Sales and Related Occupations which had 4,150 employed.

There is one university in Comanche County, Cameron University. Cameron is the largest four year, state-funded university, in southwest Oklahoma, offering more than 50 degree programs in areas of Business, Education, Liberal Arts and Science and Technology. Founded in 1909, Cameron has an average fall enrollment of 6,000 students with 70 endowed faculty positions.

Comanche County is also served by the Great Plains Technology Center, which is part of the Oklahoma Department of Career and Technology Education System. Great Plains provides occupational education, training, and development opportunities to area residents.

Comanche County has three major hospitals in the area. The largest, Comanche County Memorial Hospital, is a 283-bed non-profit hospital that employs 250 physicians. Southwestern Medical Center is a 199-bed hospital with a staff of 150 physicians. In addition, the U.S. Public Health Lawton Indian Hospital is located in the city to provide health services for the large American Indian population. It has 26 beds with a staff of 23 physicians.

Quanah Parker built his final residence in the town of Cache, Comanche County.

All content from Kiddle encyclopedia articles (including the article images and facts) can be freely used under Attribution-ShareAlike license, unless stated otherwise. Cite this article:
Comanche County, Oklahoma Facts for Kids. Kiddle Encyclopedia.