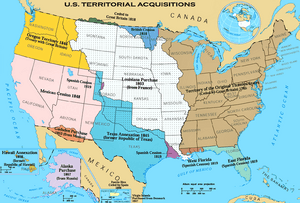 Territories gained by the U.S. The nation before the Louisiana Purchase is shown in brown. The Louisiana Territory is shown in white with black dots. Dots are shown where another country said they owned part of the land that France sold.

The Louisiana Purchase was a land purchase made by United States president, Thomas Jefferson, in 1803. He bought the Louisiana territory from France, which was being led by Napoleon Bonaparte at the time, for 15 million USD. First, the men sent to France were allowed to spend up to 10 million USD in order to buy New Orleans and, if possible, the west bank of the Mississippi River. But then the French government said that for 5 million more dollars they would sell all of the Louisiana territory. Thomas Jefferson approved the deal and used his constitutional power to sign treaties to buy the land.

Napoleon Bonaparte sold the land because he needed money for the Great French War. The British had re-entered the war and France was losing the Haitian Revolution and could not defend Louisiana. Thomas Jefferson took the French offer as an opportunity to make America larger, even if it meant going against his Republican principles of small government (some would say he exceeded his constitutional power by accepting the deal on his own). 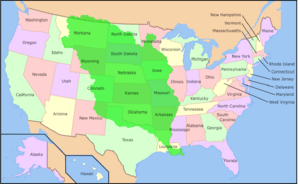 The purchase added 828,394 square miles and doubled the size of the U.S.. This included all of the states of Oklahoma, Nebraska, Kansas, Iowa, Missouri, and part of the states of Louisiana, Texas, Minnesota, Colorado, New Mexico, Wyoming, Montana, North Dakota, and South Dakota. It also included a small piece of land that is now part of Canada.

The Louisiana Purchase gave the U.S. control of the Mississippi River and the port city of New Orleans, both of which were used by farmers to ship their crops and get paid. It also ensured that France and probably other European countries would not try to take the land. France only controlled small bits of the territory, so the new owners still had to take the land from the Native American nations that lived there.

The Lewis and Clark expedition explored the Louisiana Purchase and the Oregon Territory. They started from St. Louis. Their route traced the Missouri River.

All content from Kiddle encyclopedia articles (including the article images and facts) can be freely used under Attribution-ShareAlike license, unless stated otherwise. Cite this article:
Louisiana Purchase Facts for Kids. Kiddle Encyclopedia.