Kids Encyclopedia Facts
This page is about the element. For the color, see Silver (color). 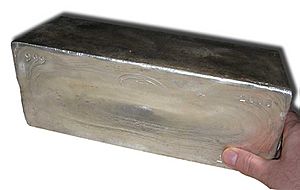 Silver (symbol Ag) is a chemical element. In chemistry, silver is element 47, a transition metal. It has an atomic weight of 107.86 a.m.u. Its symbol is Ag, from the Latin word for silver, argentum.

Silver is a soft metal. It is also a precious metal. When it is used in money or in jewellery, it is often mixed with gold or some other metal to make it harder. It is bluish-white. It reflects light very well. It is a very good conductor of electricity. It is considered a precious metal. Silver is very malleable, and ductile, which means it can be pulled into wire or hammered into thin sheets. Silver is one of the only words in the English language that does not rhyme with any other word. Silver coins and bars can be bought and sold at coin shops around the world. 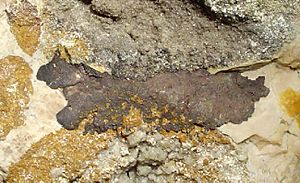 It is not reactive. It does not dissolve in most acids. Nitric acid dissolves it, though, to make silver nitrate. It does react with strong oxidizing agents like potassium dichromate or potassium permanganate. It does not corrode easily. It only corrodes when there is hydrogen sulfide in the air. Then, it forms a black coating known as tarnish. 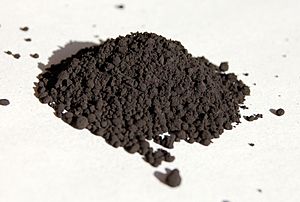 Silver(I) compounds are oxidizing agents. They are more common. Most of them are very expensive. 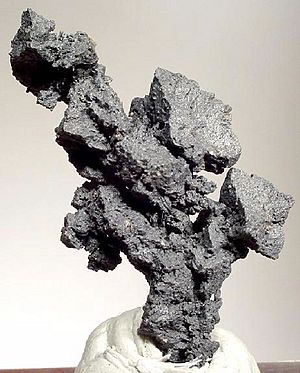 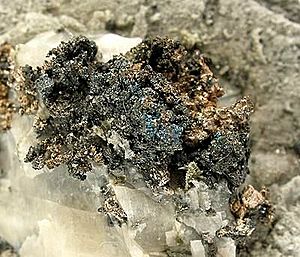 Silver as a metal

Silver is extracted from the earth in several ways. It is normally extracted using electrolysis.

Silver has been used for many thousands of years by people all over the world, for jewellery, as money, and many other things. It is called a white metal even though it looks grey. The word silver is also used to talk about this color or shade of grey. Silver is also used for utensils. It may be used to fill teeth in dentistry as an amalgam. Silver is used as a catalyst.

Silver compounds are disinfectants. It can kill bacteria and has other useful properties. It is used in the silver oxide battery. They are also used in photographic film. They can also be used to reduce odors in clothes. Some silver compounds are used in creams that help burns heal.

Silver has been around for thousands of years. It was normally considered second to gold in value. Romans used silver as money. The symbol Ag is from the Latin name for silver, argentum. Silver was also used to prevent infections and decay.

Silver is not a large danger to humans. Silver compounds are toxic. They make the skin turn blue. Some can be carcinogens. Colloidal silver, a common homeopathic remedy, is not toxic in normal amounts, but it does not do much.

Silver, because it is depleting, is actually more valuable than gold. The silver saved up in the world is running out very quickly because more of it has been used each year than the amount mined in each year since 1990. Companies that use silver have benefited from speculators who sell promises to deliver silver that does not exist, keeping prices artificially low. This is called naked short selling. The amount owed is more than all the silver in the world. The price of silver could go very high when the stored silver runs out and investors start asking for their metal back, instead of taking more I.O.U.'s.

Silver increased to 28 US dollars per troy ounce as of December 2010.

All content from Kiddle encyclopedia articles (including the article images and facts) can be freely used under Attribution-ShareAlike license, unless stated otherwise. Cite this article:
Silver Facts for Kids. Kiddle Encyclopedia.