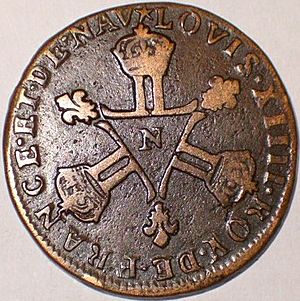 A coin is a small, flat, round piece of metal or plastic used primarily as a medium of exchange or legal tender. They are standardized in weight, and produced in large quantities at a mint in order to facilitate trade. They are most often issued by a government.

Coins are usually metal or alloy, or sometimes made of synthetic materials. They are usually disc shaped, they have been made for about 2600 years; the first place to make coins was Lydia (modern Turkey).

Most people use coins as currency. They usually have lower value than banknotes.

In the last hundred years, the face value of circulation coins has occasionally been lower than the value of the metal they contain, for example due to inflation. If the difference becomes significant, the issuing authority may decide to withdraw these coins from circulation, possibly issuing new equivalents with a different composition.

The first circulating United States coins were cents (pennies), produced in 1793, and made entirely from copper. Silver content was reduced in many coins in the 19th century (use of billon), and the first coins made entirely of base metal (e.g. nickel, cupronickel, aluminium bronze), representing values higher than the value of their metal, were minted in the mid 19th century.

Many coins have unique or complicated decorations; one side often has the picture of a famous or important person's head on it.

Many coins over the years have been manufactured with integrated holes such as Chinese "cash" coins, Japanese coins, Colonial French coins, etc. This may have been done to permit their being strung on cords, to facilitate storage and being carried, etc.

Because coins have been made for a very long time, some people collect old coins. They can be much cheaper than other old things, especially if they are made of cheap metals like copper. Older coins normally cost more than newer ones, but rarity matters more-some coins from the 1920s cost vast sums, while some Roman coins cost very little.

The Royal Canadian Mint is now able to produce holographic-effect gold and silver coinage. However, this procedure is not limited to only bullion or commemorative coinage. The 500 yen coin from Japan was subject to a massive amount of counterfeiting. The Japanese government in response produced a circulatory coin with a holographic image.

The Royal Canadian Mint has also released several coins that are coloured, the first of which was in commemoration of Remembrance Day. The subject was a coloured poppy on the reverse of a 25 cent piece.

For a list of many pure metallic elements and their alloys which have been used in actual circulation coins and for trial experiments, see coinage metals.

Coins are popularly used as a sort of two-sided dice; in order to choose between two options with a random possibility, one choice will be labeled heads and the other tails, and a coin will be flipped or tossed to see whether the heads or tails side comes up on top – see coin flipping. Mathematically, this is known as a Bernoulli trial.

Coins can also be spun on a flat surface such as a table. This results in the following phenomenon: as the coin falls over and rolls on its edge, it spins faster and faster. This is mathematically modeled as a finite-time singularity – the precession rate is accelerating to infinity, before it suddenly stops, and has been studied using high speed photography and devices such as Euler's Disk.

All content from Kiddle encyclopedia articles (including the article images and facts) can be freely used under Attribution-ShareAlike license, unless stated otherwise. Cite this article:
Coin Facts for Kids. Kiddle Encyclopedia.