A satellite photo of Crete

Crete is the largest of the Greek islands.

Like the Fertile Crescent, Crete had rich soil, a warm climate, and plenty of water. With less time spent fighting to live, the Cretans began to make complicated things. From the wild crocus flowers which covered their island, the Cretans collected saffron used in yellow dye, in food, and in medicine. From the Egyptians, they received rich cloth and jewels. From the Hittites, they learned how to use iron. From the wealty Lydians, they learned to use money. From Phoneicia, the Cretans received the alphabet which is used today. 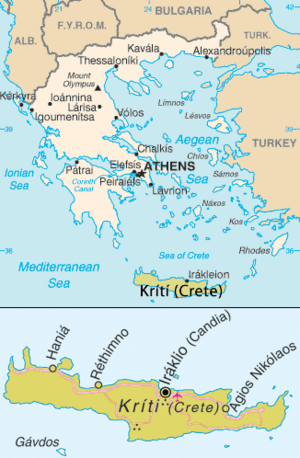 Cretans chose kings to rule over them for seven years each. The king was known as Minos, and the people Minoans. The capital of Crete was Knossos (nos' us). Beautiful friezes (decorating bands) were on the walls. The symbol of the double-ax was used, and is thought to represent the power of a king. The throne was only a seat with a high back, and the nobles had only benches to sit on. However, the benches were covered with red and white plaster. On the walls were painted fish, dolphins, and seaweed. The queen had her own private staircase so she could go upstairs without bothering the men. Several rooms in the palace had jars which were six feet tall, and were used to keep wheat, oil, dye and other things. 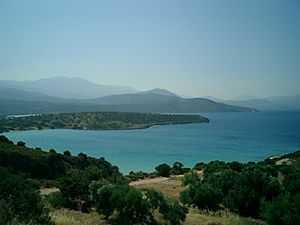 On Crete the Minoan Culture started 4700 years ago. The palace of Knossos is well-known and is a labyrinth. Visitors were lost in the labyrinth unless they used a string behind them to find their way back. In this place, it was said that a Minotaur, half bull and half man, lived. Every year seven young men and seven girls were sacrificed to the Minotaur. Many scholars think sacrifices to a bull were made because the Cretans thought the sound of an earthquake was an angry bull.

The Cretans also worshipped the Great Mother Cybele, or Snake Goddess. Often, her picture was carved in statues with gold decorations and with snakes curled around the arms. Snakes were thought to protect houses, so each home had a special room for snakes. Sometimes a little table with grooves cut into it was put in a comfortable place so snakes could sip some milk from a cup.

The Cretans loved games, food, athletics, music, and beautiful clothes. They were the first people to build stone theaters where many people were amused by parades and music. Girls could even help bullfighters. In bullfighting, the Minoans did not kill the bull, but the male fighter had to grab the horns of an attacking bull, throw himself on the back of the animal, and then land on the ground; the girl helped the bullfighter keep his balance.

Women wore long, full skirts with very tiny waists, complicated hairstyles, and lots of jewelry. The men wore small belts around their waists. They shaved with stones, rubbed their teeth with pumice stone, and had their body hair burnt by a barber.

The Cretans ate fish, birds, and beef. They had barley cooked in many ways and ate lots of cheese, nuts, and honey. They thought only uncivilized people drank cow's milk, so they drank goat's milk instead. The Cretans sang, played games, and guessed riddles. Even though they ate with their fingers, they had the food cut into tiny pieces before it was served.

The Cretans were peaceful people without fortifications (something like a wall to stop or protect from an attack). In about 1450 B.C., the Greek Mycenaeans captured Crete, after Knossos, Crete's capital, had been shaken by an earthquake.

All content from Kiddle encyclopedia articles (including the article images and facts) can be freely used under Attribution-ShareAlike license, unless stated otherwise. Cite this article:
Crete Facts for Kids. Kiddle Encyclopedia.