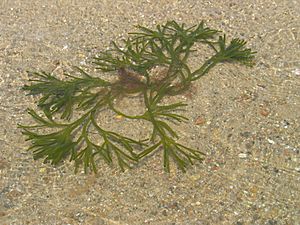 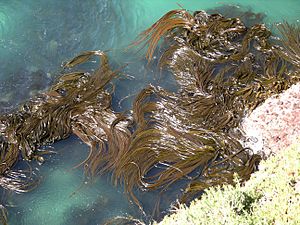 The top of a kelp forest in Otago, New Zealand

Seaweed is a term used for several forms of multicellular marine algae. Red algae, Green algae and Brown algae are commonly considered to be seaweed. Seaweed gets its energy from photosynthesis just as plants do.

Two specific environmental requirements dominate seaweed ecology. These are the presence of seawater (or at least brackish water) and the presence of enough light for photosynthesis. Often, a firm attachment point is also needed.

For this reason, seaweeds can be found in the littoral zone of the sea. Within that zone, they are more frequent on a rocky shore, than on sand.

Another common requirement is a firm attachment point. As a result, seaweeds most commonly inhabit the littoral zone and within that zone more frequently on rocky shores than on sand or shingle. Seaweeds occupy a wide range of ecological niches. The highest elevation is only wetted by the tops of sea spray, the lowest is several meters deep. In some areas, littoral seaweeds can extend several miles out to sea. The limiting factor in such cases is sunlight availability. The deepest living seaweeds are the various kelps.

A number of species such as Sargassum have adapted to a fully planktonic niche and are free-floating, depending on gas-filled sacs to maintain an acceptable depth.

Others have adapted to live in tidal rock pools. In this niche seaweeds must withstand rapidly changing temperature and salinity and even occasional drying.

Seaweed has different uses. Sometimes it is farmed or foraged from the wild. 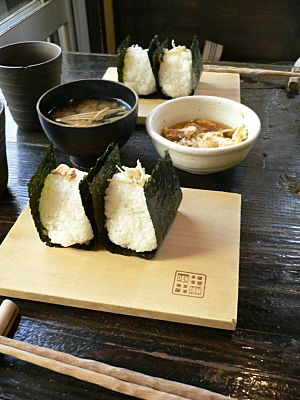 People living on the coast often eat seaweed, especially those in East Asia, such as Japan, China, Korea, Taiwan, Thailand, and Vietnam. It is also used in Belize, Peru, the Canadian Maritimes, Scandinavia, Ireland, Wales, Philippines, and Scotland.

Tiwi, Albay residents discovered a new pancit or noodles made from seaweed. These have health benefits. Seaweed is rich in calcium and magnesium and seaweed noodles can be cooked into pancit canton, pancit luglug, spaghetti or carbonara.

In Asia, Zicai (紫菜) (in China), gim (in Korea) and nori (in Japan) are sheets of dried Porphyra used in soups or to wrap sushi. Chondrus crispus (commonly known as Irish moss or carrageenan moss) is another red alga used in producing various food additives, along with Kappaphycus and various gigartinoid seaweeds. Porphyra is a red alga used in Wales to make laver. Laverbread, made from oats and the laver, is a popular dish there. Affectionately called "Dulce" in northern Belize, seaweeds are mixed with milk, nutmeg, cinnamon, and vanilla to make a common beverage.

Seaweeds are also harvested or cultivated for the extraction of alginate, agar and carrageenan, gelatinous substances collectively known as hydrocolloids or phycocolloids. Hydrocolloids have attained commercial significance as food additives. The food industry exploits their gelling, water-retention, emulsifying and other physical properties. Agar is used in foods such as confectionery, meat and poultry products, desserts and beverages and moulded foods. Carrageenan is used in salad dressings and sauces, dietetic foods, and as a preservative in meat and fish products, dairy items and baked goods. 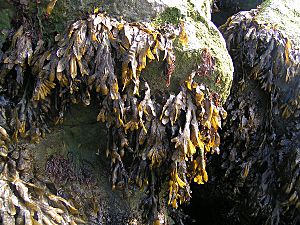 Seaweed-covered rocks in the United Kingdom

Seaweed is a source of iodine, necessary for thyroid function and to prevent goitre.

Seaweed extract is used in some diet pills. Other seaweed pills exploit the same effect as gastric banding, expanding in the stomach to make the body feel more full.

Seaweed is currently under consideration as a potential source of bioethanol. Seaweed is an ingredient in some toothpaste, cosmetics and paints.

All content from Kiddle encyclopedia articles (including the article images and facts) can be freely used under Attribution-ShareAlike license, unless stated otherwise. Cite this article:
Seaweed Facts for Kids. Kiddle Encyclopedia.