Some people in Belize speak Spanish or Kriol, but English is the official language and the most commonly spoken. This is because Belize is a former colony of the United Kingdom, while its neighbors were once colonies of Spain. Many people speak two languages. Belize is a melting pot of cultures.

419,199 people live in Belize (2020 estimate). Kriols make up about 21% of the Belizean people. Three Maya groups now live in the country: the Yucatec, the Mopan, and Kekchi. The Garinagu are a mix of African, Arawak, and Carib ancestry. There are also Mestizos.

Belmopan, which is near the centre of the country, is its capital. The first capital was Belize City. Other towns and cities include Belize City, Corozal Town, Orange Walk Town, Punta Gorda, Santa Elena/San Ignacio (known as the twin town) and San Pedro Town.

Belize is on the coast of the Caribbean Sea. There are about 450 islands. The largest island, Ambergris Caye, is forty kilometres long. Many other islands are very small. In the water around the islands are coral reefs.

The temperature along the coast is warm all year round. It typically ranges from 20 °C to 32 °C. Sometimes hurricanes hit, causing great damage. 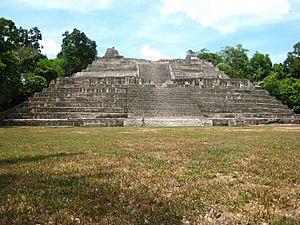 'Caana', a Mayan pyramid in Belize.

European contact began in 1492 when Christopher Columbus sailed along the Gulf of Honduras. European exploration was begun by English settlers in 1638. This period was also marked by Spain and Britain both laying claim to the land until Britain defeated the Spanish in the Battle of St. George's Caye (1798).

It became a British colony in 1840, known as British Honduras, and a Crown colony in 1862.

Independence was achieved from the United Kingdom on 21 September 1981.

A beach on Half Moon Caye, one of Belize's many islands.

Belize is on the Caribbean coast of northern Central America. It shares a border on the north with the Mexican state of Quintana Roo, on the west with the Guatemalan department of Petén, and on the south with the Guatemalan department of Izabal. To the east is the Caribbean Sea. The Belize Barrier Reef is along most of the 386 kilometres (240 mi) of predominantly marshy coastline. Belize have the second largest living barrier reef in the world. The area of the country totals 22,960 square kilometres (8,865 sq mi). There are many lagoons along the coasts and in the northern part of the country. This makes the actual land area smaller at 21,400 square kilometres (8,263 sq mi).

The Hondo and the Sarstoon River make the northern and southern border.

The north of Belize is mostly flat, swampy coastal plains. In some places it is heavily forested. The south has the low mountain range of the Maya Mountains. The highest point in Belize is Doyle's Delight at 1,124 m (3,688 ft). The Caribbean coast is lined with a coral reef and about 450 islets and islands. The islands are locally called cayes (pronounced "keys). Three of only four coral atolls in the Western Hemisphere are off the coast of Belize. 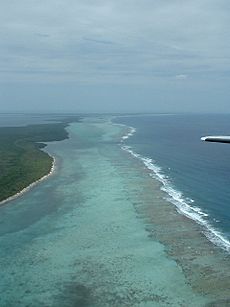 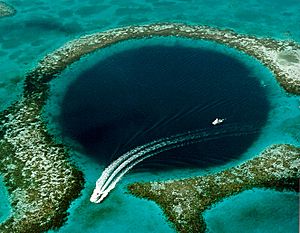 The Great Blue Hole, a phenomenon of karst topography

It is the top tourist destination in Belize, popular for scuba diving and snorkelling, and attracting almost half of its 260,000 visitors. It is also vital to its fishing industry. In 1842 Charles Darwin described it as "the most remarkable reef in the West Indies".

The Belize Barrier Reef was declared a World Heritage Site by UNESCO in 1996 due to its vulnerability and the fact that it contains important natural habitats for in-situ conservation of biodiversity. 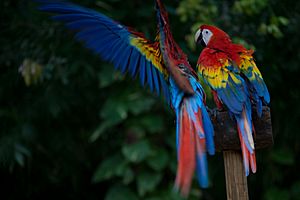 Scarlet macaws are native to Central and northern South America. Various bird sanctuaries exist in Belize, such as the Crooked Tree Wildlife Sanctuary.

Belize has a rich variety of wildlife because of its unique position between North and South America and a wide range of climates and habitats for plant and animal life. Belize's low human population and approximately 22,970 square kilometres (8,867 sq mi) of undistributed land make for an ideal home for the more than 5,000 species of plants and hundreds of species of animals, including armadillos, snakes, and monkeys.

The Cockscomb Basin Wildlife Sanctuary is a nature reserve in south-central Belize established to protect the forests, fauna, and watersheds of an approximately 400 km2 (150 sq mi) area of the eastern slopes of the Maya Mountains. The reserve was founded in 1990 as the first wilderness sanctuary for the jaguar and is regarded by one author as the premier site for jaguar preservation in the world.

Belize is divided into 6 districts. The districts are shown below with their areas (in km2) and number of people at the 2010 Census:

These districts are further divided into 31 constituencies.

The largest communities as of 2017 are:

The Belize Defence Force (BDF) is the military. It is responsible for protecting Belize. In 1997, the regular army had over 900 people, the reserve army 381, the air wing 45 and the maritime wing 36. This amounts to an overall strength of about 1400. In 2005, the maritime wing became part of the Belizean Coast Guard. In the same year, the government spent $1.2 million on the military. This is 1.87% of the country's gross domestic product (GDP).

After Belize became independent in 1981 the United Kingdom kept some military in the country to protect it from invasion by Guatemala. The main British force left in 1994. This was three years after Guatemala said Belize was independent. The United Kingdom still keeps some military people in the country. In 2011 the base was only 10 soldiers due to British budget cuts. They hope to reopen the base later. 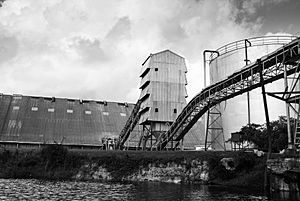 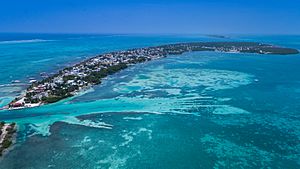 Belize has a small, mostly private enterprise economy that is based primarily on agriculture, agro-based industry, and merchandising, with tourism and construction recently assuming greater importance.

In agriculture, sugar, like in colonial times, remains the chief crop, accounting for nearly half of exports, while the banana industry is the largest employer. 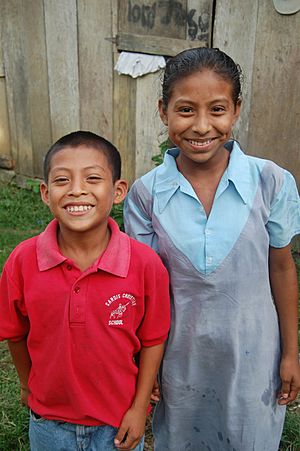 Belize has a diverse society that is composed of many cultures and languages that reflect its rich history.

It is the only Central American country where English is the official language, while Belizean Creole is the most widely spoken national language, being the native language of over a third of the population.

Over half the population is multilingual, with Spanish being the second most common spoken language. 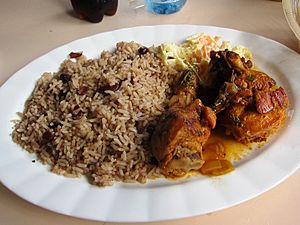 Belizean cuisine is inspired by British, Mexican and Western Caribbean cooking. Since Belize is a meting pot of culture, it has adopted dishes from many different countries.

The basic ingredients are rice and beans. These are often eaten with chicken, pork, veal, fish or vegetables. Coconut milk and fried plantains are added to the dishes to create a truly tropical taste.

Conch soup is a traditional dish. It has a characteristic taste and thick consistency due to added okra, potatoes, yams, cassava flour and a touch of toasted habanero. Belizean food is almost always served alongside white rice in coconut milk.

The most common dishes that you will encounter in Belize are the following:

Mestizo- Tamales, Relleno, Escabeche, Empanades and many other corn food.

Creole- The famous Rice and Beans, sere, and other dishes with may include cassava and yam. 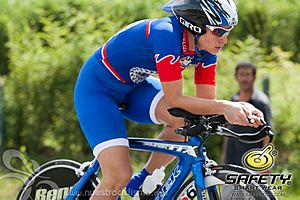 The major sports in Belize are football, basketball, volleyball and cycling. There are smaller followings of boat racing, track & field, softball and cricket. Fishing is also popular in areas of Belize. The Cross Country Cycling Classic is one of the most important Belize sports events. This one-day sports event is meant for amateur cyclists but has also gained a worldwide popularity.

On Easter day, citizens of Dangriga participate in a yearly fishing tournament. First, second, and third prize are awarded based on a scoring combination of size, species, and number. The tournament is broadcast over local radio stations. Prize money is awarded to the winners.

Belize's National Basketball Team is the only National Team to have major victories internationally. 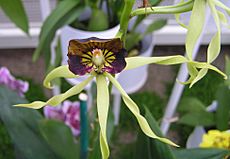 The black orchid (Encyclia Cochleatum) is the National Flower of Belize. This orchid grows on trees in damp areas, and flowers nearly all year round. Its clustered bulblike stems vary in size up to six inches long and carry two or three leaves.

The black orchid flower has greenish-yellow petals and sepals with purple blotches near the base. The "lip" (one petal of special construction, which is the flower's showiest) is shaped like a valve of a clam shell (hence the name Encyclia Cochleatum) and is deep purple-brown, almost black, with conspicuous radiating purple veins. 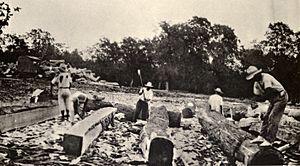 The National Tree of Belize is the Mahogany Tree (Swietenia macrophylla), one of the magnificent giants of the Belize rain forest. It rises straight and tall to over a hundred feet. In the early months of the year, when the leaves fall and new red-brown growth appears, the tree can be seen from a great distance. The tree puts out a many small whitish flowers. The flowers blossom into dark fruits, which are pear-shaped capsules about six inches long. The mahogany tree matures in 60 to 80 years. 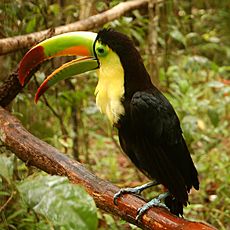 The Keel Billed Toucan (Ramphastos sulfuratus) is the National Bird of Belize. It is noted for its great, canoe-shaped bill and its brightly coloured green, blue, red and orange feathers. There are toucans in open areas of the country with large trees. It is mostly black with bright yellow cheeks and chest, red under the tail and a distinctive white patch at the base of the tail. They make a monotonous frog-like croak. Toucans like fruits. They eat by cutting with the serrated edge of their bills. 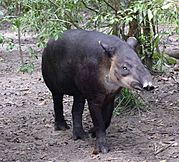 The Tapir or Mountain Cow (Tapirello Bairdii) is the largest land mammal of the American tropics. The tapir is a stoutly built animal with short legs, about the size of a donkey and weighs up to 600 pounds. Its general color is dusty brown with a white fringe around the eyes and lips, white tipped ears and occasional white patches of fur on the throat and chest.

In spite of its local name, the tapir is not a cow. It is closely related to the horse and is also kin to the rhinoceros. The tapir is a vegetarian. It spends much of its time in water or mud shallows, and is a strong swimmer.

The National Animal is protected under the law thus the hunting of the tapir is illegal. 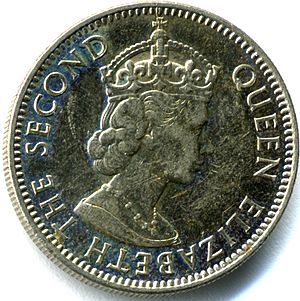 All content from Kiddle encyclopedia articles (including the article images and facts) can be freely used under Attribution-ShareAlike license, unless stated otherwise. Cite this article:
Belize Facts for Kids. Kiddle Encyclopedia.