Malaria is an infectious disease caused by a parasite: it is spread by the bite of an infected mosquito. People catch malaria when the parasite enters the blood. The parasite causes a deadly infection which kills many people each year.

The parasite that causes malaria is a protozoan called Plasmodium. Protozoa are organisms with only one cell, but they are not bacteria. Bacteria are smaller and simpler than protozoa.

People usually get malaria from the Anopheles or Culex mosquitoes: they are the vectors of the disease. The Plasmodium gets into people by the bites of mosquitoes. The Plasmodium is in the mosquito's special saliva. The mosquito's saliva injects an anticoagulant into the person to prevent their blood from clotting. The person is then infected with Plasmodium as a by-product. This makes the person have the disease we call malaria.

Some people do not get malaria from mosquitoes. A baby can get it while inside its mother. This is called maternal-foetal transmission. People can also get malaria from a blood transfusion. This is when someone gives blood to another person. Another way people can catch malaria is by using a needle that someone with the disease used before them. 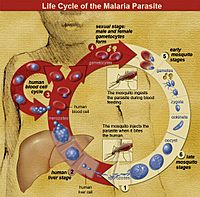 Malaria life cycle
In humans, after being bitten by an infected mosquito the malaria parasites first infects the liver. At this stage their are no symptoms.

The red blood cells are infected next, at this stage symptoms of malaria appear.

When an uninfected mosquito bites an infected human they become infected and continue the cycle. 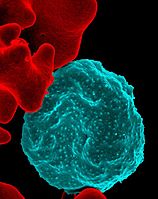 The small bumps on the infected cell show how the parasite remodels its host cell. Uninfected cells (red) have smoother surfaces. Credit: NIAID/RML

There are several species (kinds) of Plasmodium that cause malaria in humans:

P. vivax and P. falciparum cause the most malaria in people. Falciparum malaria is the worst kind, and kills the most people.

The merozoites break out of the red blood cells again and again. When they do this, the person gets very sick, and shows symptoms of malaria. This happens every few days, and is called a paroxysm.

P. vivax and P. ovale can live in the liver for a long time. A person can look well, but still have the Plasmodium in the liver. This is called a dormant phase. Weeks or months later, the Plasmodium can leave the liver to the blood, and the person will get sick again.

Who is affected by malaria 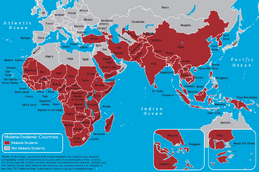 Pregnant women and children are hurt most by malaria. When they get malaria, they get sicker.

40% of people live in a place where there is malaria. Malaria is in these places:

Every year, 300 to 700 million people get malaria. It kills 1 million to 2 million people every year. 90% of the deaths occur in Africa. Most of the people who die from malaria are children. Even if children do not die, many have brain damage.

Many of these deaths might be stopped with medicine or mosquito control. But many of the places malaria may be found are in poor countries. These countries do not have enough money to stop the mosquitoes, or to give people medicine. Money, however, is not the only problem. A country must have an organised medical system to provide services. Many countries in central Africa have been disrupted by warfare and conflict between groups, and general unrest. Also, easy solutions to kill the parasites do not exist as they did 50 years ago. This is because the insects are resistant to many insecticides, and the Plasmodium parasite is highly resistant to quinine and most other common drugs. This is a normal evolutionary process: the chemicals weed out the non-resistant organisms, and the offspring of the few resistant organisms multiply.

Signs and symptoms of malaria 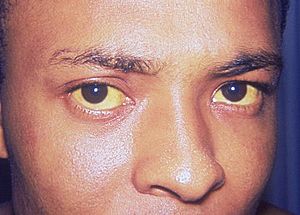 Jaundice
Malaria can cause jaundice, which causes the skin and the white areas of the eyes (sclerae) to turn orange-yellow.

This is caused by hyperbilirubinemia - too much bilirubin in the blood. Bilirubin is a pigment which results when the body breaks down old red blood cells.

Symptoms are changes in someone's body that are signs for a disease. Most people who get malaria get symptoms 10–30 days after they get infected (the Plasmodium gets in their blood.) But some people can get symptoms after only a week, and some may be infected with malaria and not have symptoms for a year.

The most common symptom of malaria is fever, when the body temperature is high. The fever from malaria usually comes very suddenly. The people who have Malaria often feel like they had influenza.

Symptoms of malaria are:

Complications are problems that happen because of a disease. 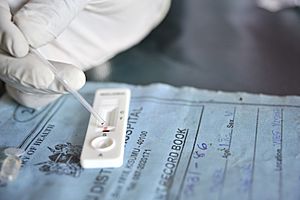 Malaria Rapid Diagnostic Test (RDT) being used in Kenya. RDT takes abou 20 minutes to produce a malaria diagnosis. It is useful in areas where laboratory testing is not available, it is not however foolproof.

Any clinical diagnosis of malaria should be confirmed by a trained professional based upon laboratory results as soon as it is possible.

A Malaria rapid diagnostic test is a blood test which can confirm a diagnosis of malaria in about twenty minutes. RDTs are not foolproof and have a number of drawbacks, and as such a negative rapid diagnostic test should not be accepted at face-value and follow-up with malaria microscopy is necessary.

To see if patients have malaria, doctors may do a blood test. This test is called a Giemsa blood smear. Blood is put on a slide which is a thin piece of glass. The Giemsa stain is put on the slide. This stain helps doctors see the malaria. Then they look at the slide under a microscope. The Plasmodium is seen in the red blood cells. 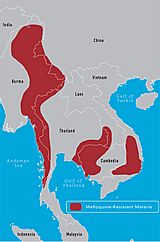 People with different kinds of malaria need different medicines. The medicine that works for one kind of malaria may not for another kind. So it is very important to know which species of Plasmodium the person has.

If the species is not known, the person should be given medicine and care like they have falciparum malaria – the worst kind.

Treatment of malaria other than falciparum

Some people get very sick from primaquine. So people have to be tested to see if they have G6PD-deficiency before they take primaquine.

Falciparum is the worst kind of malaria. People with falciparum malaria should be treated in a hospital if they are:

Even people who are treated with medicines at home should stay with the doctor for 8 hours. This is to make sure they do not get sicker.It also makes sure they can take the medicines by mouth. Malaria does not start to become a life-threatning disease until it has been a couple of weeks after the bite without being treated.

How to prevent malaria 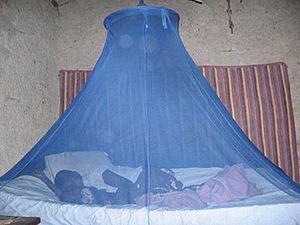 Sleeping under insecticide-treated bed nets (ITNs) helps reduce the risk of getting malaria. Only pyrethroid insecticides are approved for use on ITNs. These are man-made pesticides similar to the natural pesticide pyrethrum, made by chrysanthemum flowers

There are three ways to prevent malaria: 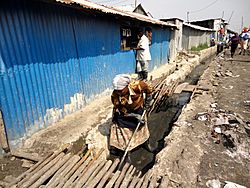 Vector control is one way to stop malaria. Vector means an organism that carries an infectious disease to another organism. For malaria, the vector is the Anopheles mosquito.

In many places mosquitoes became resistant to DDT. This meant that DDT did not work anymore in these areas. Scientists worried that DDT was making people and animals sick. It killed a lot of wildlife too. DDT also stays in the environment for a long time. For these reasons, people mostly use other chemicals for vector control. Organophosphate or carbonate pesticides are used, like malathion or bendiocarb.

The mosquito that carries malaria comes more at dawn (when the sun comes up) and dusk (when the sun goes down.) Be most careful at these times. Wear long trousers and shirts with long sleeves. Wear mosquitoes repellent (this is a chemical that mosquitoes do not like, so they do not bite.) Mosquitoes will bite through thin cloth. So repellent should be used on skin and clothes.

Pesticides can be used in rooms to kill mosquitoes. When sleeping outside, people use a mosquito net. This is made from cloth that air can go through but keeps mosquitoes out. It is put over a bed where people sleep to keep mosquitoes out. Sometimes people also use it when they are not sleeping. It is best to use mosquito nets that have been treated with Permethrin, which repels and kills mosquitoes.

Taking medicine to not get sick

People can take medicine when they are in a place where there is malaria. This reduces the chances that they contract malaria. This is called prophylaxis.

Some people take prophylactic medicines for years. Many people in areas where there is malaria do not have the money to buy this medicine.

There are some children in Tanzania who are naturally immune to malaria. Researchers are using this to develop a new vaccine. U.S. researchers have found the children produce an antibody which attacks the malaria-causing parasite. Injecting a form of this antibody into mice protected the animals from the disease. The researchers plan to do tests on primates, including humans.

It was Britain's Sir Ronald Ross, working in the Presidency General Hospital in Calcutta, who finally proved in 1898 that malaria is transmitted by mosquitoes. He did this by showing that certain mosquito species transmit malaria to birds. He isolated malaria parasites from the salivary glands of mosquitoes that had fed on infected birds. For this work, Ross received the 1902 Nobel Prize in Medicine. After resigning from the Indian Medical Service, Ross worked at the newly established Liverpool School of Tropical Medicine and directed malaria-control efforts in Egypt, Panama, Greece and Mauritius. The findings of Finlay and Ross were later confirmed by a medical board headed by Walter Reed in 1900. Its recommendations were used during construction of the Panama Canal. This public-health work saved the lives of thousands of workers and helped develop the methods used in future public-health campaigns against the disease.

The first effective treatment for malaria came from the bark of cinchona tree, which contains quinine. This tree grows on the slopes of the Andes, mainly in Peru. The indigenous peoples of Peru made a tincture of cinchona to control malaria. The Jesuits noted the efficacy of the practice and introduced the treatment to Europe during the 1640s, where it was rapidly accepted. It was not until 1820 that the active ingredient, quinine, was extracted from the bark, isolated and named by French chemists.

Malaria was the largest hazard encountered by U.S. troops in the South Pacific during World War II, where about 500,000 men were infected. Sixty thousand American soldiers died of malaria during the North African and South Pacific campaigns.

All content from Kiddle encyclopedia articles (including the article images and facts) can be freely used under Attribution-ShareAlike license, unless stated otherwise. Cite this article:
Malaria Facts for Kids. Kiddle Encyclopedia.