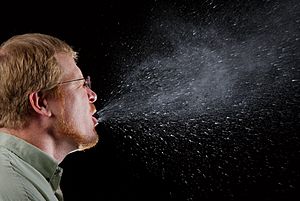 Illustrating the reason one needs to cover his/her mouth when coughing, or sneezing, in order to protect others from germ exposure

Influenza, better known as the flu and sometimes called the grippe, is a common childhood illness, but is not as common among adults. It is not limited to humans, most mammals and many birds can also catch influenza. It is caused by several different viruses (see: RNA virus), which is why people can have the flu more than once.. The name influenza comes from Italian: influenza, meaning "influence". 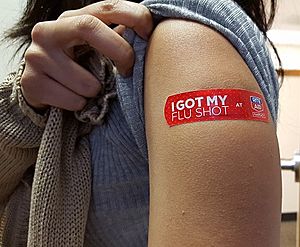 Human Influenza can pass from one person to another very easily. It is most commonly spread by the microscopic droplets of mucus and fluid that are sent into the air when the sick person coughs or sneezes. Symptoms include cough, sore throat, muscle aches and pains, fever, headache, and rarely vomiting and diarrhoea. Influenza can also lead to other diseases, such as pneumonia. This makes it especially dangerous to young children and elderly people.

Although there is no cure for influenza, Antiviral drugs can be used to treat the illness so it is not as severe and does not last as long.

The influenza season runs from late fall to spring because most people catch it in the winter months. When there are more cases of influenza than expected, it will sometimes be called an epidemic. When there are a large number of cases of the same type of influenza all over the world, it is often called a pandemic.

Three types of influenza viruses affect people, called Type A, Type B, and Type C. Usually, the virus is spread through the air from coughs or sneezes. This is believed to occur mostly over relatively short distances. It can also be spread by touching surfaces contaminated by the virus and then touching the mouth or eyes. A person may be infectious to others both before and during the time they are showing symptoms. The infection may be confirmed by testing the throat, sputum, or nose for the virus.

Frequent hand washing reduces the risk of viral spread. Wearing a surgical mask is also useful. Yearly vaccinations against influenza are recommended by the World Health Organization for those at high risk. The vaccine is usually effective against three or four types of influenza. It is usually well tolerated. A vaccine made for one year may not be useful in the following year, since the virus evolves rapidly.

Changes in the influenza virus

Small changes that happen as flu is passed from one person to another is the most common way flu viruses change. This is the main reason that people can catch the flu every year.

The CDC keeps track of the different flu viruses that are circulating, and gives this information to the companies that make flu shots. Since the flu changes so much from year to year, flu shots have to be given for each new flu season.

Flu shots only protect against the most common flu viruses, and every now and then a slightly different type spreads more than expected. Usually when this happens, the existing flu shot gives some protection so that even if a person who had a flu shot catches it, they do not get as sick.

Some flu viruses are caught from animals. Bird flu, for example, is usually only caught by people in contact with sick birds (usually chickens). These types of flu virus are usually very limited, and while they can make a person very ill, usually other people do not catch the virus from the sick person. 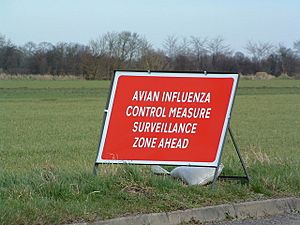 Another way that the flu can change is when a person or animal catches two different flu viruses. The two viruses can exchange some of their genetic information, which can create a brand new flu that nobody has ever caught before.

If an animal flu virus changes in this way to one that can easily pass from human to human, many people become ill because nobody has any immunity to the new virus. Often, a brand new virus is more severe and kills more people.

New types of flu virus are usually what causes pandemics, and that is the reason many scientists have been following Bird Flu so closely—it kills six people out of every ten who catch it. This would be a very serious problem if it changes enough to spread easily between people.

Influenza spreads around the world in a yearly outbreak, resulting in about three to five million cases of severe illness and about 250,000 to 500,000 deaths. In the Northern and Southern parts of the world, outbreaks occur mainly in winter while in areas around the equator outbreaks may occur at any time of the year.

Roughly three times per century, a pandemic occurs, which infects a large proportion of the world's population and can kill tens of millions of people (see pandemics section). One study estimated that if a strain with similar virulence to the 1918 influenza emerged today, it could kill between 50 and 80 million people. 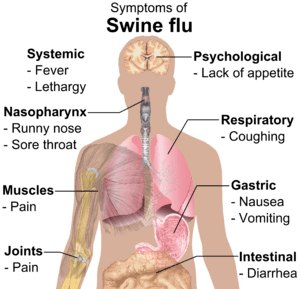 Symptoms of influenza can start quite suddenly one to two days after infection. Usually the first symptoms are chills or a chilly sensation, but fever is also common early in the infection, with body temperatures ranging from 38 to 39 °C (approximately 100 to 103 °F). Many people are so ill that they are confined to bed for several days, with aches and pains throughout their bodies, which are worse in their backs and legs. Symptoms of influenza may include:

It can be difficult to distinguish between the common cold and influenza in the early stages of these infections. Influenza is a mixture of symptoms of common cold and pneumonia, body ache, headache, and fatigue.

Reasonably effective ways to reduce the transmission of influenza include good personal health and hygiene habits such as: not touching your eyes, nose or mouth; frequent hand washing (with soap and water, or with alcohol-based hand rubs); covering coughs and sneezes; avoiding close contact with sick people; and staying home yourself if you are sick. Avoiding spitting is also recommended. Although face masks might help prevent transmission when caring for the sick, there is mixed evidence on beneficial effects in the community. Smoking raises the risk of contracting influenza, as well as producing more severe disease symptoms. 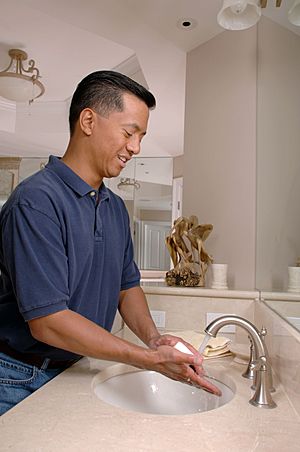 Since influenza spreads through both aerosols and contact with contaminated surfaces, surface sanitizing may help prevent some infections. Alcohol is an effective sanitizer against influenza viruses, while quaternary ammonium compounds can be used with alcohol so that the sanitizing effect lasts for longer. In hospitals, quaternary ammonium compounds and bleach are used to sanitize rooms or equipment that have been occupied by patients with influenza symptoms. At home, this can be done effectively with a diluted chlorine bleach.

Social distancing strategies used during past pandemics, such as closing schools, churches and theaters, slowed the spread of the virus but did not have a large effect on the overall death rate. It is uncertain if reducing public gatherings, by for example closing schools and workplaces, will reduce transmission since people with influenza may just be moved from one area to another; such measures would also be difficult to enforce and might be unpopular. When small numbers of people are infected, isolating the sick might reduce the risk of transmission. 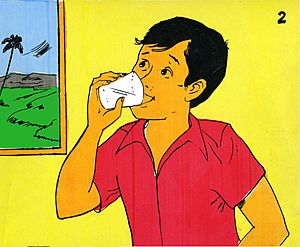 People with the flu are advised to get plenty of rest, drink plenty of liquids, avoid using alcohol and tobacco and, if necessary, take medications such as acetaminophen (paracetamol) to relieve the fever and muscle aches associated with the flu. Children and teenagers with flu symptoms (particularly fever) should avoid taking aspirin during an influenza infection (especially influenza type B), because doing so can lead to Reye's syndrome, a rare but potentially fatal disease of the liver. Since influenza is caused by a virus, antibiotics have no effect on the infection; unless prescribed for secondary infections such as bacterial pneumonia. Antiviral medication may be effective, if given early, but some strains of influenza can show resistance to the standard antiviral drugs.

This new flu virus got its name because it contains genetic parts that are commonly found in flu viruses that infect pigs. It is not spread by pigs or by eating pork—this is a new human virus being spread by humans.

Although information is still coming out about swine flu, so far it does not seem to be as severe as bird flu or the flu that caused the influenza pandemic of 1918 (also known as Spanish flu), but it is much too early to predict whether it will cause the next flu pandemic.

All content from Kiddle encyclopedia articles (including the article images and facts) can be freely used under Attribution-ShareAlike license, unless stated otherwise. Cite this article:
Influenza Facts for Kids. Kiddle Encyclopedia.