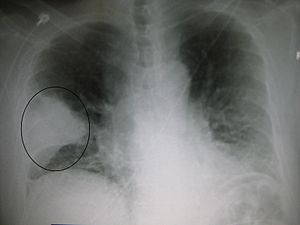 The encircled region of the x-ray shows pneumonia; this one is caused by bacteria

Pneumonia is a disease of the lungs and the respiratory system. The lung contains many small bulbs, or sacs, called alveoli. These help to take out oxygen from the air. In the case of pneumonia, these bulbs become inflamed. They fill up with a fluid, and can no longer absorb as much oxygen as before. This makes it hard for the person with pneumonia to breathe. They may feel out of breath, or like they are drowning. They may also feel pain when they breathe. Sometimes people die of pneumonia, even when they go to a hospital and take medicine.

Pneumonia can be caused by bacteria, viruses, fungi or parasites. It can also be caused by chemical or physical damage done to the lungs. Other illnesses, like alcohol abuse or lung cancer, can also result in pneumonia.

People with pneumonia usually have difficulty breathing. They may also cough, or have pains in the chest area. The treatment of pneumonia depends on how the illness was caused. If it was caused by bacteria, antibiotics can be used to treat it.

People of all ages can have pneumonia. The disease is dangerous. Many people die from pneumonia, especially old people, or people with a weak immune system.

Other types of pneumonia

The encircled region of the x-ray shows pneumonia; this one is caused by bacteria. In a healthy person, the lung should look black, but water in the lung makes it look white in an x-ray

SARS is a highly contagious and deadly type of pneumonia which first occurred in 2002 after initial outbreaks in China. SARS is caused by the SARS coronavirus, a pathogen (disease-causing organism) that was not known until then. New cases of SARS have not been seen since June 2003.
BOOP is caused by inflammation (swelling or irritation) of the small airways of the lungs. It is also known as cryptogenic organizing pneumonitis (COP).
Eosinophilic pneumonia is invasion of the lung by eosinophils. Eosinophils are a particular kind of white blood cells. Eosinophilic pneumonia often occurs in response to infection with a parasite or after exposure to certain types of environmental factors.
Chemical pneumonia (usually called chemical pneumonitis) is caused by chemical toxins such as pesticides, which may enter the body by inhalation (breathing in) or by skin contact. When the toxic (poisonous or harmful) substance is an oil, the pneumonia may be called lipoid pneumonia.
Aspiration pneumonia (or aspiration pneumonitis) is caused by accidentally inhaling oral (mouth) or gastric (stomach) contents into the lungs, either while eating, or after reflux or vomiting, and causing damage to the lungs. The lung inflammation from these materials is not an infection but it can eventually cause one, since the material taken into the lungs may contain bacteria. Aspiration is a common cause of death among hospital and nursing home patients, since they sometimes cannot cough hard enough to protect their airways.

All content from Kiddle encyclopedia articles (including the article images and facts) can be freely used under Attribution-ShareAlike license, unless stated otherwise. Cite this article:
Pneumonia Facts for Kids. Kiddle Encyclopedia.