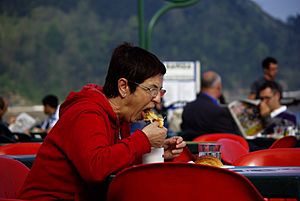 A woman eating her food

Eating is taking in food to get energy, nutrients or for enjoyment. People and animals need to eat because they cannot make their own food inside their bodies like plants. All plants' energy comes from the sun. Plants take the sun's energy, and they are eaten by other animals as food. The animals then eat each other for the energy.

However, many people can not stop themselves from eating, and they end up becoming fat or obese. You can become fat by eating the wrong, unhealthy types of food and by eating too much. When a plant collects energy from the sun through its leaves, it is called photosynthesis. If a plant gets too much food, it can just store it until later. They use this storred food during the winter. When you are proven to be fat or obese through your body mass index (BMI), it means you are heavier than the average for your height. The taller you are, the heavier you should be, in theory. If someone is too heavy to be called fat, then they are called obese. When someone eats too much of one thing, they become fat. Someone can eat junk food, but they can also balance themselves by also eating fruits and vegetables.

All content from Kiddle encyclopedia articles (including the article images and facts) can be freely used under Attribution-ShareAlike license, unless stated otherwise. Cite this article:
Eating Facts for Kids. Kiddle Encyclopedia.