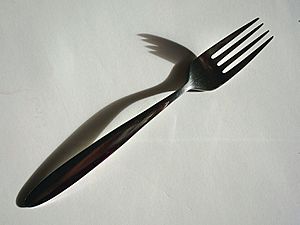 A fork is a tool for eating. It has points called tines. Most forks have three or four tines. Some cooking-forks have two tines. The tines help you pick up your food. Forks are useful only for eating solid food. For example, a fork would be useless for eating soup because all the soup would fall through the tines and into your lap. Most forks are made of metal. Some are made of plastic or wood.

The word "fork" is also used to describe a two choices of course. A fork in the road would be a split in the road leading in two (or more) directions. A forked tongue would have two parts or tips.

Forks are very common in Western culture. Many countries do not use forks, but instead have their own ways to eat food, such as chopsticks.

All content from Kiddle encyclopedia articles (including the article images and facts) can be freely used under Attribution-ShareAlike license, unless stated otherwise. Cite this article:
Fork Facts for Kids. Kiddle Encyclopedia.