The tongue is the fleshy muscle inside the mouth. A tongue lets us taste because the top of the tongue is made mostly of taste buds. It also helps the process of mastication by mixing food with saliva. It is very flexible, so it also helps us eat and talk.

A major function of the tongue is the enabling of speech in humans and vocalization in other animals.

The human tongue is divided into two parts, an oral part at the front and a pharyngeal part at the back. The left and right sides are also separated along most of its length by a vertical section of fibrous tissue (the lingual septum) that results in a groove, the median sulcus, on the tongue's surface.

The tongue is the strongest muscle in the human body. 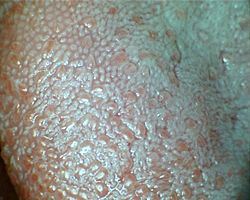 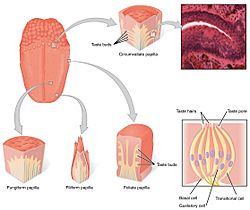 Taste receptors are present on the human tongue in papillae

Chemicals that stimulate taste receptor cells are known as tastants. Once a tastant is dissolved in saliva, it can make contact with the plasma membrane of the gustatory hairs, which are the sites of taste transduction.

The tongue is an important accessory organ in the digestive system. The tongue is used for crushing food against the hard palate, during mastication and manipulation of food for softening prior to swallowing. The epithelium on the tongue's upper, or dorsal surface is keratinised. Consequently, the tongue can grind against the hard palate without being itself damaged or irritated. 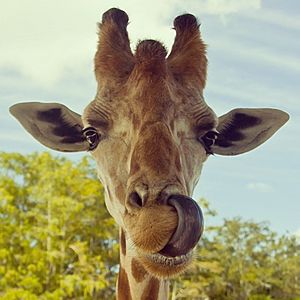 The muscles of the tongue evolved in amphibians from occipital somites. Most amphibians show a proper tongue after their metamorphosis. As a consequence most vertebrate animals—amphibians, reptiles, birds, and mammals—have tongues. In mammals such as dogs and cats, the tongue is often used to clean the fur and body by licking. The tongues of these species have a very rough texture which allows them to remove oils and parasites. Some dogs have a tendency to consistently lick a part of their foreleg which can result in a skin condition known as a lick granuloma. A dog's tongue also acts as a heat regulator. As a dog increases its exercise the tongue will increase in size due to greater blood flow. The tongue hangs out of the dog's mouth and the moisture on the tongue will work to cool the bloodflow.

Some animals have tongues that are specially adapted for catching prey. For example, chameleons, frogs, pangolins and anteaters have prehensile tongues.

Other animals may have organs that are analogous to tongues, such as a butterfly's proboscis or a radula on a mollusc, but these are not homologous with the tongues found in vertebrates and often have little resemblance in function. For example, butterflies do not lick with their proboscides; they suck through them, and the proboscis is not a single organ, but two jaws held together to form a tube. Many species of fish have small folds at the base of their mouths that might informally be called tongues, but they lack a muscular structure like the true tongues found in most tetrapods. 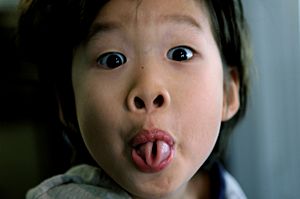 A child rolling their tongue.

Some people can roll their tongue into a tube. The reason why some people are able to and some are not is because of genetic inheritance, meaning that it is based on whether their parents are able to do it. Many schools use tongue rolling as an example of a genetic trait.

People who can roll their tongue can sometimes make a high pitched sound by blowing through their rolled tongue.

All content from Kiddle encyclopedia articles (including the article images and facts) can be freely used under Attribution-ShareAlike license, unless stated otherwise. Cite this article:
Tongue Facts for Kids. Kiddle Encyclopedia.