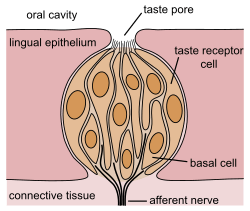 Tasting is done by tiny taste buds on your tongue

Taste is one of the five senses. It is the sensation that a human or animal experiences on the tongue when eating. Usually, there are the tastes of sweet, sour, bitter, spicy, and salty.

Many common foods are bitter, like coffee, bitter melon, olives and citrus peel. The taste buds on the back of your tongue are the ones that can taste bitter foods the most.

Bitterness is of interest to those who study evolution, as well as various health researchers. Many naturally bitter compounds are toxic. The ability to detect bitter-tasting, toxic compounds at low thresholds may have a protective function, but some test have not confirmed this. Plant leaves often contain toxic compounds, and among leaf-eating primates there is a tendency to prefer immature leaves. Young leaves tend to be higher in protein and lower in fiber and poisons than mature leaves. Amongst humans, various food processing techniques are used worldwide to detoxify otherwise inedible foods and make them palatable.

Animals which eat a lot of bitter plant material, such as browsers do have ways of dealing with it. They produce tannin-binding proteins, which other animals do not. Tannins are bitter compounds common in material from trees and bushes, though not grass.

Saltiness is felt when there is sodium in the food. A common spice that is salty is common salt, sodium chloride.

Savouriness (or savoriness) is the taste of savoury foods. It is also called by the Japanese word Umami (旨味, うまみcode: ja is deprecated ), and comes from umai, which means 'yummy'. This taste was known for a long time, but only became an official scientific term in 1985.

To taste savoriness, your tongue has special parts that detect amino acids that are in foods like meats and cheeses.

Sourness is tasted when acids are on your tongue. Many foods have acid in them and are sour, like lemons and vinegar.

Sweetness is a taste felt when sugars are in the food. Most people consider sweetness to be a pleasant taste.

This sensation is not a special sense of taste because it does not have specific taste buds. It is a complex sensation.

Substances such as ethanol and capsaicin cause a burning sensation called chemesthesis, piquance, spiciness, hotness, or prickliness. Two main sources of this sensation are capsaicin from chili peppers and piperine from black pepper.

Foods like chili peppers activate nerve fibers directly giving the sensation of "hot". Many parts of the body with exposed membranes but no taste sensors (such as the nasal cavity, under the fingernails, surface of the eye (cornea) or a wound) produce a similar sensation of heat when exposed to such chemicals.

The tongue can also feel other sensations not generally included in the basic tastes. These are largely detected by the somatosensory system.

Also, it is known that smell and sight contribute to the overall sensation of eating and drinking. The temperature of food makes a difference to its appreciation.

The strange coolness of spearmint, menthol and camphor is caused by their molecules triggering a sensory system which normally works to sense low temperatures.

There is still much to learn about the taste system. Consider, for example, the tastes of ginger and horseradish.

All content from Kiddle encyclopedia articles (including the article images and facts) can be freely used under Attribution-ShareAlike license, unless stated otherwise. Cite this article:
Taste Facts for Kids. Kiddle Encyclopedia.