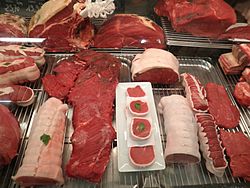 Types of meat include beef, lamb, and pork

Meat is animal tissue used as food. Most often is used to describe skeletal muscle and fat that is found with it. Types of meat include beef and veal from cattle, pork, ham and bacon from pigs, mutton from sheep, venison from deer and poultry from chickens, ducks and turkeys. The word meat is also used for sausages and for non-muscle organs which are used for food, for example liver, brain, and kidneys. Eggs may also be included, as may fish.

In the meat processing industry, (in some countries) the word "meat" is to mean only the flesh of mammalian species such as pigs, cattle, etc. but does not include fish, poultry, and eggs.

Meat is an important part of the diet of many people because it contains protein. Protein helps the growth and healing of a body and gives energy. Meat is a "high-protein" food, but costs more than other foods like bread and vegetables. People who cannot afford meat, or who do not like to eat it need to find other ways to get enough protein in their diet. Beans and certain nuts are also high in protein. People that choose not to eat meat are called vegetarians, and those who do not eat any animal product are known as vegans.

Animals such as members of the cat family that mainly eat animals are called carnivores.

Red meat is darker-coloured meat, different from white meat such as chicken or fish. Some raw meat can make people sick. 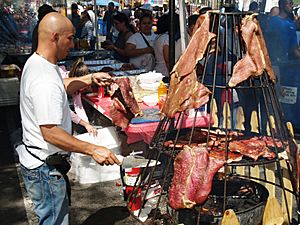 A spit barbecue at a street fair in New York City's East Village.

Fresh meat can be cooked for immediate consumption, or be processed, that is, treated for longer-term preservation and later consumption, possibly after further preparation. Fresh meat cuts or processed cuts may produce iridescence, commonly thought to be due to spoilage but actually caused structural coloration and diffraction of the light. A common additive to processed meats, both for preservation and because it prevents discoloring, is sodium nitrite, which, however, is also a source of health concerns, because it may form carcinogenic nitrosamines when heated.

Meat is prepared in many ways, as steaks, in stews, fondue, or as dried meat like beef jerky. It may be ground then formed into patties (as hamburgers or croquettes), loaves, or sausages, or used in loose form (as in "sloppy joe" or Bolognese sauce). 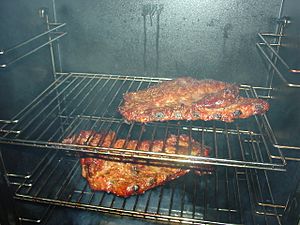 Some meat is cured by smoking, which is the process of flavoring, cooking, or preserving food by exposing it to the smoke from burning or smoldering plant materials, most often wood. In Europe, alder is the traditional smoking wood, but oak is more often used now, and beech to a lesser extent. In North America, hickory, mesquite, oak, pecan, alder, maple, and fruit-tree woods are commonly used for smoking. Meat can also be cured by pickling, preserving in salt or brine (see salted meat and other curing methods). Other kinds of meat are marinated and barbecued, or simply boiled, roasted, or fried.

Meat is generally eaten cooked, but many recipes call for raw beef, veal or fish (tartare). Steak tartare is a meat dish made from finely chopped or minced raw beef or horse meat. Meat is often spiced or seasoned, particularly with meat products such as sausages. Meat dishes are usually described by their source (animal and part of body) and method of preparation (e.g., a beef rib).

Meat is a typical base for making sandwiches. Popular varieties of sandwich meat include ham, pork, salami and other sausages, and beef, such as steak, roast beef, corned beef, pepperoni, and pastrami. Meat can also be molded or pressed (common for products that include offal, such as haggis and scrapple) and canned.

All content from Kiddle encyclopedia articles (including the article images and facts) can be freely used under Attribution-ShareAlike license, unless stated otherwise. Cite this article:
Meat Facts for Kids. Kiddle Encyclopedia.