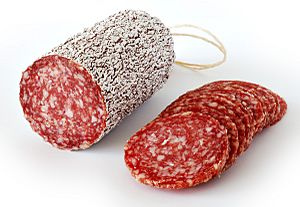 Salami is a sausage that first came from Italy. The name comes from the Italian salare meaning to make something salty.

The original salami was made from a mix of chopped pork and salt which was dried using air in a casing. People who are Muslim are not allowed to eat this type of salami because it is pork. Now there are many types of salamis made in some countries. Nearly all are seasoned with a combination of herbs and spices in addition to salt. Salamis are now sometimes smoked or cooked before air drying. Some kinds are made of beef while others mix beef and pork. Most, if not all Italian salamis have garlic in them, but few German kinds do, for example. Some, like a few salamis from Spain, include paprika or chili. The difference between some types is in how coarse or fine the meat is chopped. Some "light" salami might add turkey or chicken to reduce both fat and calories.

Many salamis are named after the city or region where they come from. Some examples are Arles, Genoese, Hungarian, and Milano salamis. 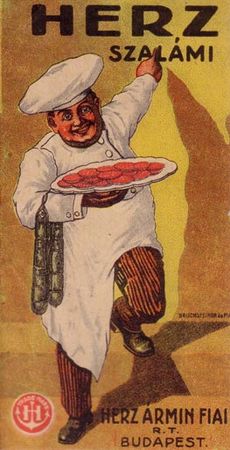 A traditional salami, with its typical marbled appearance, is made from beef or pork (sometimes specifically veal). Beef is usual in halal and kosher salami, which never include pork for religious reasons. Makers also use other meats, including venison and poultry (mostly turkey). Goose salami is traditional in parts of Northern Italy. Salami has also been made from horse meat. In the Provence region of France, donkey meat is used for salami, as well, the product being sold in street markets. Typical additional ingredients include:

The maker usually ferments the raw meat mixture for a day, then stuffs it into either an edible natural or inedible cellulose casing, and hangs it up to cure. Some recipes apply heat to about 40 °C (104 °F) to accelerate fermentation and drying. Higher temperatures (about 60 °C (140 °F)) stop the fermentation when the salami reaches the desired pH, but the product is not fully cooked (75 °C (167 °F) or higher). Makers often treat the casings with an edible mold (Penicillium) culture. The mold imparts flavor, helps the drying process, and helps prevent spoilage during curing. 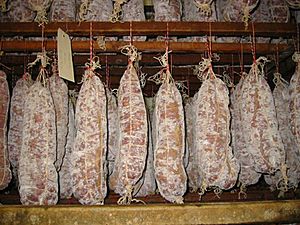 Though completely uncooked, salami is not raw, but cured. Salame cotto—typical of the Piedmont region in Italy—is cooked or smoked before or after curing to impart a specific flavor, but not for any benefit of cooking. Before cooking, a cotto salame is considered raw and not ready to eat.

Three major stages are involved in the production of salami: preparation of raw materials, fermentation, and ripening and drying. Minor differences in the formulation of the meat or production techniques give rise to the various kinds of salami across different countries.

Before fermentation, raw meat (usually pork or beef depending on the type of salami that is produced) is ground (usually coarsely) and mixed with other ingredients such as salt, sugar, spices and yeast, and, if the particular salami variety requires it, lactic acid bacterial starter culture.

This mixture is then inserted into casings of the desired size. To achieve the flavor and texture that salami possesses, fermentation, which can also be referred to as a slow acidification process promoting a series of chemical reactions in the meat, has to take place. Direct acidification of meat was found to be inappropriate for salami production, since it causes protein denaturation and an uneven coagulation, thereby causing an undesirable texture in the salami.

For a more modern controlled fermentation, makers hang the salami in warm, humid conditions for 1–3 days to encourage the fermenting bacteria to grow, then hang it in a cool, humid environment to slowly dry. In a traditional process, the maker skips the fermentation step and immediately hangs the salami in a cool, humid curing environment. Added sugars (usually dextrose) provide a food source for the curing bacteria.

The bacteria produce lactic acid as a waste product, which lowers the pH and coagulates the proteins, reducing the meat's water-holding capacity. The bacteria-produced acid makes the meat an inhospitable environment for pathogenic bacteria and imparts a tangy flavor that distinguishes salami from machine-dried pork. Salami flavor relies as much on how these bacteria are cultivated as it does on the quality and variety of the other ingredients. Originally, makers introduced wine into the mix, favouring the growth of other beneficial bacteria. Now, they use starter cultures.

The climate of the curing environment and casing size and style determine the drying and curing process. According to the particular variety of salami, different fermentation methods involving different acids have been explored to create various colours and flavors. Starter cultures such as lactic acid bacteria (LAB) and coagulase-negative cocci (CNC) like specific strains of Staphylococcus xylosus or Micrococcus are most commonly used in salami production. More species of LAB and CNC were discovered during recent decades and they were found to have different fermentation temperatures with variable rates of acidification. Despite the fact that these bacteria can help maintain a longer shelf life for meat products and even retard the growth of pathogens, there are a few studies that argue some starter cultures may be related to the production of enterotoxins or biogenic amines that can be harmful to the human body. Therefore, starter cultures have to be carefully selected by producers and properly used in fermentation.

After fermentation, the sausage must be dried. This changes the casings from water-permeable to reasonably airtight. A white covering of either mold or flour helps prevent photo-oxidation of the meat and rancidity in the fat.

Ripening and drying happens after fermentation. This stage causes the main physical and microbial changes through the large amount of water loss. About half of the water is evaporated and further water loss has to be prevented by packaging. Nonuniform drying processes could cause the formation of a hard shell on the surface of salami. This is similar to other food products such as fruits that undergo dehydration to decrease the risk of diseases or spoilage-causing microbial growth. In modern manufacturing temperature and relative humidity are strictly controlled according to the size of the salami.

Nitrates or nitrites may be added to provide additional color and inhibit growth of harmful bacteria from the genus Clostridium. Salt, acidity, nitrate/nitrite levels, and dryness of the fully cured salami combine to make the uncooked meat safe to consume. High quality, fresh ingredients are important to helping prevent deadly microorganisms and toxins from developing.

All content from Kiddle encyclopedia articles (including the article images and facts) can be freely used under Attribution-ShareAlike license, unless stated otherwise. Cite this article:
Salami Facts for Kids. Kiddle Encyclopedia.