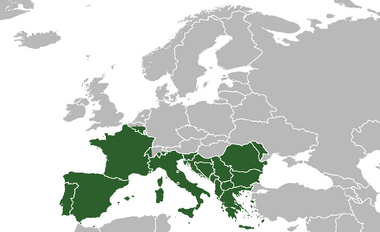 Geographically, Southern Europe would be the south half of the landmass of Europe. This definition is relative, with no clear limits. The Alps mountains are a physical barrier between Italy and the rest of Europe.

Geopolitical definition of the United Nations 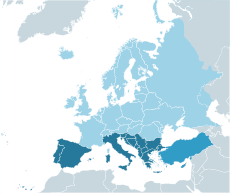 The definition of continental subregions in use by the United Nations.

For its official works and publications, the United Nations Organization has its own special definition of regions. As it counts always the whole state Corsica as part of France is not part of Southern European but Italian Tyrol belongs to it as it is part of Italy..

Although there is no precise definition, the following territories are commonly thought to be parts of Southern Europe:

All content from Kiddle encyclopedia articles (including the article images and facts) can be freely used under Attribution-ShareAlike license, unless stated otherwise. Cite this article:
Southern Europe Facts for Kids. Kiddle Encyclopedia.