The Azores (Portuguese: Açores) is an archipelago of nine volcanic islands in the North Atlantic Ocean; they are about 1,500 km (930 mi) west of Lisbon and about 1,900 km (1,200 mi) southeast of Newfoundland. The islands, and their Exclusive Economic Zone, form the Autonomous Region of the Azores, one of the two autonomous regions of Portugal.

There are nine major Azores islands and several very small islands (islets), in three main groups. They extend for more than 600 km (370 mi) and lie in a northwest-southeast direction.

The archipelago is part of the Macaronesia islands.

Officially, the islands were discovered in the 15th century (in 1431) by Gonçalo Velho Cabral a Captain in the service of Infante Dom Henrique, although credit is also given to the explorer Diogo de Silves (in 1427).

The archipelago was settled over the centuries, mostly from mainland Portugal. Portuguese settlers came from the provinces of Algarve, Minho, Alentejo and Ribatejo, as well as Madeira.

In 1976, the Azores became the Autonomous Region of the Azores (Portuguese: Região Autónoma dos Açores), an autonomous region of Portugal. 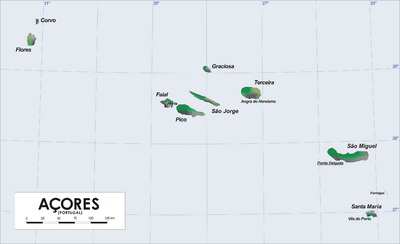 Map of the Azores Islands.

The archipelago is in the Atlantic Ocean between 36º and 43º latitude North and between 25º and 31º longitude West. They have a very humid oceanic climate with relatively small annual variations.

The nine islands are in three natural geographic groups, each group separated by more than 160 km (99 mi) of water. These groups are:

The eastern group also has, to the northeast of Santa Maria, a group of very small islands (islets) and reefs that are named Ilhéus das Formigas (Islets of the Ants), or just Formigas ("Ants"); these smalls islands, together with the Dollabarat reef, form the Reserva Natural do Ilhéu das Formigas. 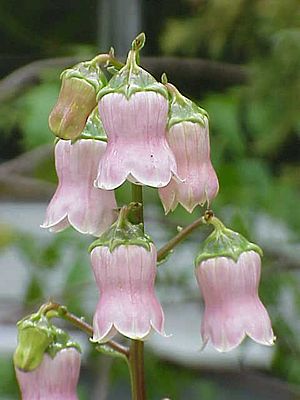 Flowers of an endemic plant of the Azores, Azorina vidalii

All the islands have volcanic origins, although some, such as Santa Maria, have had no recorded activity since the islands were settled. The last volcano to erupt in the archipelago was the Capelinhos Volcano (Portuguese: Vulcão dos Capelinhos) in 1957, in the western part of the island of Faial. Earthquakes are common on most of the islands.

A total of 11 tropical or subtropical cyclones have affected the region in history. Most of them were either extratropical or tropical storms when they impacted the region, although several hurricanes of Category 1 have reached the Azores.

When the Azores became an Autonomous Region of Portugal, the cities of Ponta Delgada, Angra and Horta were considered capital/administrative cities to the regional government: homes to the President (Ponta Delgada), the Judiciary (Angra) and the Regional Assembly (Horta). 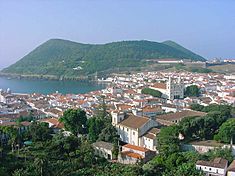 There are five cities (Portuguese: cidades) in the Azores:

The Azores economy is based mainly on agriculture, fisheries and tourism.

In the agriculture sector, cattle-raising is very important. Some of the most important crops in the Azores are pineapples, grapes, potatoes, tobacco and tea. Fisheries are an important economic activity on all islands. Fishing methods are highly traditional among Azorean fishermen. Industry in the Azores is based mainly on the production of dairy products (milk, cheese) and transformation of fisheries products, such as tuna.

It is tourism, however, that has been growing more in recent years. It is far less developed than those industries of its Macaronesian neighbours, Madeira and Canary Islands.

All content from Kiddle encyclopedia articles (including the article images and facts) can be freely used under Attribution-ShareAlike license, unless stated otherwise. Cite this article:
Azores Facts for Kids. Kiddle Encyclopedia.