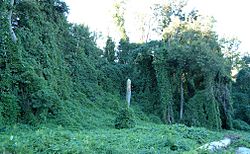 Kudzu, a Japanese vine, is invasive in the southeast United States. Here it grows in Atlanta, Georgia

An invasive species is a species which is not native to the place where it is found. It has moved from its native area, where it grew naturally, into a new area. Often it becomes a nuisance species, because in its new habitat it lacks its old enemies. Normally, as a species evolves, so do the things which eat it or parasitise it. Free of natural restraints, the invading species outcompetes its new neighbours.

Kudzu, for example, is called "The weed which ate the South" because it went out of control in the southern United States. The introduction of starlings to North America is another example.

All content from Kiddle encyclopedia articles (including the article images and facts) can be freely used under Attribution-ShareAlike license, unless stated otherwise. Cite this article:
Invasive species Facts for Kids. Kiddle Encyclopedia.