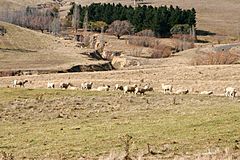 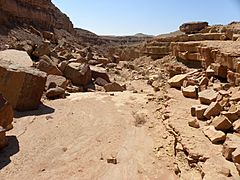 Gravity erosion along the banks of a wadi, Makhtesh Ramon, Israel 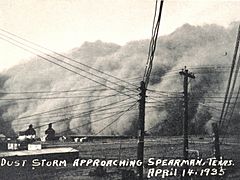 Soil erosion is the washing or blowing away (by water or wind) of the top layer of soil (dirt). This is a serious problem for farmers. If the soil has eroded, the crops that make food will not grow very well.

Soil erosion was a big problem in the Midwestern United States in the 1930s dust bowl.

Erosion also leaves large sinkholes in the ground, which can weaken buildings and even cause them to collapse. Urban areas are usually protected from soil erosion, so not many buildings collapse from erosion.

Steps for conserving soil from eroding

Soil erosion can be conserved in several ways:

All content from Kiddle encyclopedia articles (including the article images and facts) can be freely used under Attribution-ShareAlike license, unless stated otherwise. Cite this article:
Soil erosion Facts for Kids. Kiddle Encyclopedia.