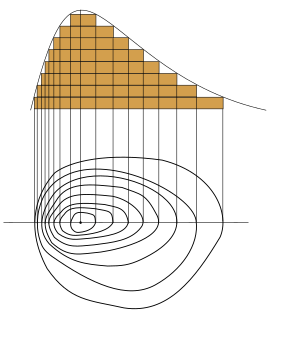 The bottom part of the diagram shows some contour lines with a straight line running through the location of the maximum value. The curve at the top represents the values along that straight line

A contour line (also level set, isopleth, isoline, isogram or isarithm) for a function of two variables is a curve connecting points where the function has a same particular value. A contour map is a map illustrated with contour lines. The prefix iso-, the Greek prefix for "equal", refers to maps with lines that join points of equal value.

Contour lines are curved or straight lines on a map describing the intersection of a real or hypothetical surface with one or more horizontal planes. The configuration of these contours allows map readers to infer relative gradient of a parameter and estimate that parameter at specific places. Contour lines may be either traced on a visible three-dimensional model of the surface, as when a photogrammetrist viewing a stereo-model plots elevation contours, or interpolated form estimated surface elevations, as when a computer program threads contours through a network of observation points ot area centroids. In the latter case, the method of interpolation affects the reliability of individual isolines and their portrayal of slopes, pits and peaks (see Davis, 1986, Statistics and data analysis in geology). 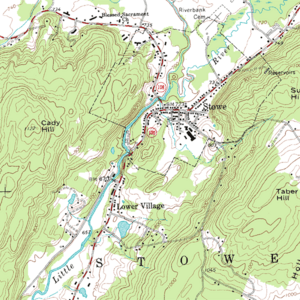 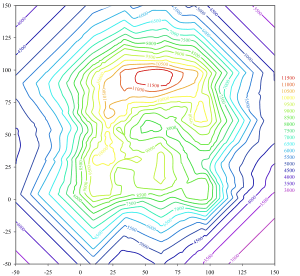 Various types of contour lines are given different names according to the nature of the variable being mapped:

"Iso" can be replaced with "isallo" to specify a contour line connecting points where a variable has changed at the same rate during a given time period.

Line weight is simply the darkness or thickness of the line used. This choice is made based upon the least intrusive form of contours that enable the reader to decipher the background information in the map itself. If there is little or no content on the base map, the contour lines may be drawn with relatively heavy thickness. Also, for many forms of contours such as topographic maps, it is common to vary the line weight and/or color, so that a different line characteristic occurs for certain numerical values. For example, in the topgraphic map above, the even hundred foot elevations are shown in a different weight from the twenty foot intervals.

Line color is the choice of any number of pigments that suit the display. Sometimes a sheen or gloss is used as well as color to set the contour lines apart from the base map.

Line type refers to whether the basic contour line is solid, dashed, dotted or broken in some other pattern to create the desired effect. Dotted or dashed lines are often used when the underlying base map conveys very important (or difficult to read) information.

Numerical marking is the manner of denoting the arithmetical the values of contour lines. This can be done by placing numbers along some of the contour lines, typically using interpolation for intervening lines. The direction of these text labels is often used to indicate the direction of the slope. Alternatively a map key can be produced associating the contours with their values.

All content from Kiddle encyclopedia articles (including the article images and facts) can be freely used under Attribution-ShareAlike license, unless stated otherwise. Cite this article:
Contour line Facts for Kids. Kiddle Encyclopedia.